The 2010 election results have some declaring that the United States has taken a hard right turn. Others, including many African Americans, see the outcome as a racist rejection of African-American leadership. I choose to view the results through a different lens—that of a Christian ethicist amazed at the lack of moral language available during both the campaigns and the post-election analysis. 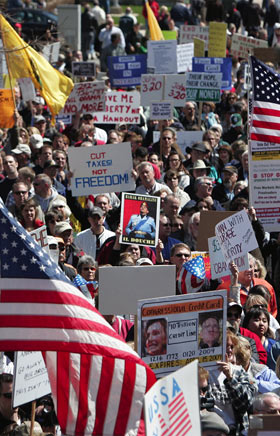 After a strong effort in 2008 to highlight the values at stake in the presidential campaign, the whole issue of moral vision evaporated this year in a humid, overcast sky of personal discontent. Apart from health care, policy issues found no hearing. The economy received less attention than jobs, and both major parties grabbed for the “we’re on your side” issue of lower taxes with no discussion of those things on which tax dollars should or should not be spent.

Recent national elections, presidential and otherwise, saw candidates reach for moral grounding. Organizations such as Sojourners pressed voters to consider poverty as a moral issue, and discussions about abortion and war drew on moral and religious discourse, as did 2008’s call for “hope” and “change.” But vision is out and reductionist self-interest is in. The struggle for America’s soul in past elections disappeared, replaced by a tug of war over who sides best with middle-class interests. Outside of a few buzz words such as “too liberal,” or identifying ad hominem similarities between current candidates and unpopular current or former office holders, Republican and Democratic campaign commercials were virtually indistinguishable. It is as if America no longer has a soul. The collective fear factor loomed so large it eclipsed sound moral reasoning and any need for real policy debate.

Yet, under the radar screen, the role of religion in public life goes on unaffected. Congregations such as First Baptist Church of Lincoln Gardens in Somerset, New Jersey, featured in the CNN documentary “Almighty Debt,” continue working at the intersection of the American economy and moral values. Collaborations between the faith community and government in such areas as prisoner reentry, fatherhood, and marriage and family go unexamined. Discussions about abortion and interfaith cooperation sponsored by the current administration’s Office of Faith-based and Neighborhood Partnerships are mostly unnoticed. Consideration of religion and morality is postponed while angst and anger born of fear receive central attention.

It has been almost 20 years since Stephen Carter lamented the trivialization of religion in the public square in his book The Culture of Disbelief.  The ensuing years witnessed a rise in the public engagement of a variety of faith traditions, enriching civic life and making citizens more intentional about drawing on moral values to frame their lives together. Barack Obama’s appeal to hope in 2008 reflected the cresting of that important wave. Sadly, in 2010 it seems to have gone back out to sea.