ROSHANEH ZAFAR (Founder, Kashf Foundation): I think poverty is definitely an issue that we need to resolve, and second is education.

FRED DE SAM LAZARO: Fifteen years ago, Roshaneh Zafar began trying to understand and attack the roots of Pakistan’s poverty. It’s been aggravated in recent years by civil unrest, religious militancy, and natural disasters. Yet Zafar says she’s seen progress in some places, like this neighborhood in her native Lahore.

ZAFAR: So you’ll see a little slightly better infrastructure. You’ll see that their homes have improved over the years. You may not see the same poverty that we saw over a decade ago.

DE SAM LAZARO: And you may not see any women, at least outdoors. That’s not uncommon in a conservative Muslim society. But Zafar says it creates the mistaken impression that women don’t contribute to economic activity. So in 1995 she started a nonprofit organization called Kashf or “revelation.” It makes small-business loans to women to increase the impact and visibility of their work. 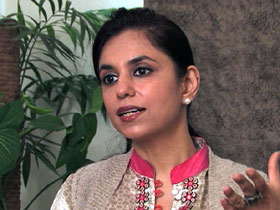 DE SAM LAZARO: And so behind a lot of these storefronts are homes and families run by women, and those are the targets of your loan program.

ZAFAR: Absolutely. There’s a whole, you know, back end that’s being run by women and managed by women, and that’s really the target.

DE SAM LAZARO: In the narrow by-ways and alleys of this ancient city are thousands of small family businesses financed with loans from Kashf. The group now has 150 branches across Pakistan and has loaned the equivalent of $200 million so far to more than 300,000 women. She took us to visit Ruquia Boota, who borrowed about $120 eight years ago and grew her business in embroidered textiles with the help of two more loans. She now employs her two daughters and occasionally up to 10 other women from the neighborhood.

ZAFAR: How do you know what is selling and how much material to buy?

RUQUIA BOOTA: We get orders and then buy accordingly, and we also know what the trends are.

ZAFAR: Where do you get your materials from?

DE SAM LAZARO: The questions are more than pleasant conversation. Loan officers from Kashf pay close attention to the affairs of borrowers. The relationship begins early with financial education. 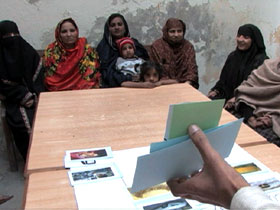 Teacher speaking to a class for potential borrowers: I’m going to show you this chart. It has four kinds of expenses: necessary, unnecessary, emergency, and wish list.

DE SAM LAZARO: Prospective borrowers get basic tips on how to budget their expenses and rank their priorities.

Teacher to class: Where would you put the cell phone?

DE SAM LAZARO: Kashf gets most of its fund by borrowing from commercial and national banks, and it disperses loans—an average of $150—after rigorous evaluation, and every day young loan officers, most of them female, fan out to visit clients like Sobia Saeed. She has steadily expanded her salon business with three loans.

SOBIA SAEED: I’ve been doing these kids’ hair today. One more left to do.

Mother: How much do you charge for each?

DE SAM LAZARO: That’s about 40 US cents. This 27-year-old entrepreneur is doing a lot better than before, but like most borrowers is hardly well off. It’s one reason Zafar says her group makes sure that loan proceeds are put to their intended business purpose, not to household or even emergency use.

ZAFAR: If the money is misutilized—let’s say they spent half of it to fix the roof in the house—then the loan officer goes and informs the branch manager, and we tag that loan, and we will then monitor it. Ninety-seven percent of our loans are spent on the businesses that were agreed on. Three percent may be used on other—may be misutilized. 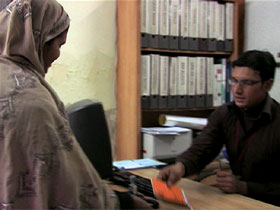 DE SAM LAZARO: The vigilance comes at a time when microfinance has become a highly competitive business in several countries—often a for-profit business. In India, where it became a multi-billion-dollar industry, an epidemic of nonperforming loans caused a near standstill in lending, hurting many deserving clients, Zafar says.

ZAFAR: As competition is increasing, the microfinance institutions are targeting the same client. So one client may have two to three or four loans, and what that leads is to pyramiding and over-indebtedness, and ultimately the client is stuck with debt and can’t repay it back. The idea is really to add value to the clients’ lives. It’s not to force the credit on them.

DE SAM LAZARO: The idea of giving small loans to poor women was popularized by Bangladesh’s Nobel Prize-winning and nonprofit Grameen Bank. A chance meeting with its founder, Muhammad Yunus, inspired Zafar to leave her job as a World Bank economist and start a similar social enterprise in Pakistan. Zafar says microfinance is a particularly good fit in Pakistan, officially an Islamic republic, since it complies with Sharia law, which has strict rules on lending. 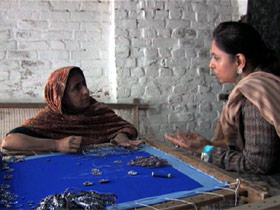 DE SAM LAZARO: They also must share the high administrative costs. Borrowers pay an effective interest rate of about 35 percent. Zafar says it’s the only way to sustain the model, because Kashf has to pay between 14 and 16 percent on the money it borrows to make loans. From clients like Sadhiya Aijaz, there are no complaints. She and her husband, Mohammed, worked for years cutting metal manually into short strips to be bent into chain links. Their loan from Kashf has brought them machines and a much improved standard of living for this couple and their five daughters.

SADHIYA AIJAZ: We’re able to produce a lot more now, and the work is much easier. Previously life was very tough, but now with money coming in life has become much easier. We can send our children to be educated, give them clothes, books, food. I want my children to become officers, to be educated like you people. When you have an education your life is much improved.

DE SAM LAZARO: Roshaneh Zafar, raised in an affluent family, with degrees from Yale and the University of Pennsylvania’s Wharton Business School, agrees that education must go hand in hand with economic opportunity if endemic poverty is to end. For now she’s working to expand a new savings bank at Kashf, hoping to lend more money and to larger enterprises. One type that’s in solid demand, she says, is small private schools.

For Religion & Ethics Newsweekly, this is Fred de Sam Lazaro in Lahore, Pakistan.