BOB ABERNETHY, host: As the crisis in Egypt continued to unfold this week, many questions emerged about the religious implications. What role will religion play in a new government, and in particular, what role will the Muslim Brotherhood play? How will the new situation in Egypt affect the rest of the Middle East, including Israel and the peace process, and how will Egypt’s Christian minority fare? We explore all this with Qamar-ul Huda, a senior program officer at the US Institute of Peace. He’s a consultant in many parts of the Middle East on conflict resolution. Dr. Huda, welcome.

ABERNETHY: In the demonstrations in the streets there wasn’t much evidence of a religious influence. It seemed pretty secular, but lots of people expect that in a new government there will be strong religious representation. Is that fair to say? 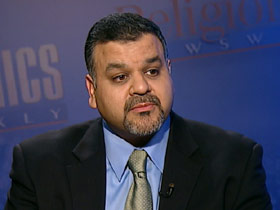 HUDA: That’s a fair assessment. We know that the mass protest in Egypt is a mass public crossing all ideologies. This is a national issue for Egypt, and it’s not contained to any one group. The new government or the transitional government that will be formed in the near future—I think the religious voices or the religious parties will be at the table but will not dominate the party.

ABERNETHY: Now there’s a lot of fear around, as you know and have read, about the Muslim Brotherhood—what it is, what it means, what its place might be in a new government, and what the implications of that are.

HUDA: Well, the Muslim Brotherhood is almost seven decades old, and it’s basically a group that reacted to a secular nationalist movement in Egypt. It’s—right now it’s been regulated to do mainly social welfare and social services.

ABERNETHY: Is it what you would call a radical Islamic group?

HUDA: I think there are fringes of the Brotherhood that had radical groups and voices. They’ve been, I think, mostly eliminated under Mubarak in the ’90s. Right now it’s a very small group that’s mismanaged but also has very little influence as we speak today.

ABERNETHY: And in a new government, whatever the name of it, you would expect there to be religious representation, and what does that mean? What does that imply? 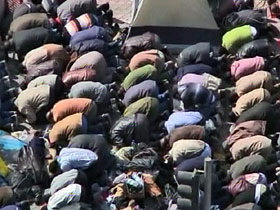 HUDA: I think that what that means is that the religious representatives will try to push for more Islamic values in the government, perhaps more Islamic teachings and ethics in schools, and perhaps have law to represent more Islamic values, but I don’t think they’ll have any real influence in the beginning, because the concern is now constitutional reform and unemployment.

ABERNETHY: And what about the religious minorities, especially the Christians, the Copts? There are ten million, about, of those?

ABERNETHY: What would be the outlook for them?

HUDA: Well, at this time we know they are participating with the protests. They are looking for a change in Egypt. I think right now they are most likely positioned to take part in the government, and we’re hoping and many people are hoping there will be a more pluralistic government that will embrace the Christian Copts.

ABERNETHY: They might even have a place in the government? 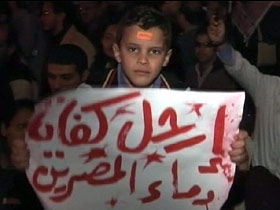 HUDA: I think they will.

ABERNETHY: Well, what about Israel and the peace process between Israel and the Palestinians? What are the implications of that whoever makes up the government, the new government in Egypt?

HUDA: Yes, I think this is the big question and the big concern for many of the Western thinkers and analysts. What will happen to the treaty signed with Israel? What is the security risk for Egypt? But for what it seems like that right now the government, the transitional government will take care of internal matters but also may be—stay with international treaties that it signed with Israel. There’s no indication that radical Islam will come to the forefront, and there’s no indication that it will abdicate with current treaties.

ABERNETHY: And what about between Egypt and the US?

HUDA: Well, it’s looking like on the streets there’s some discontent with Western forces and American influence in terms of its delay in moving the regime out. But I think Egyptians are very positive with their alliances with the West, and I think they will continue with those alliances.

ABERNETHY: Dr. Qamar-ul Huda from the US Institute of Peace. Thank you.

HUDA: Thank you for having me.