BOB ABERNETHY, host: There was jubilation in the streets of Egypt Friday (February 11) after President Hosni Mubarak finally decided to step down. He handed power to the military’s Supreme Council. The Council pledged to meet protestors’ demands for a peaceful transfer of authority that will lead to a free democracy. Meanwhile, debate continues over the role religion could play in a new government. Kim Lawton and I examine the week’s dramatic developments in Egypt with Geneive Abdo. She’s a longtime Middle East reporter and author of the book “No God but God: Egypt and the Triumph of Islam.” She’s a fellow and analyst at the Century Foundation and National Security Network. Welcome to you.

GENEIVE ABDO: Thank you very much.

ABERNETHY: Geneive, one way or another there’s going to be a new government in Egypt. What can we say about the degree of religious influence that we can expect in that government? 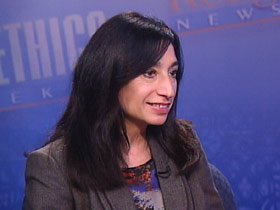 ABDO: Well that, of course, Bob, is the question everyone’s been asking, and I think that there’s no doubt, I mean as everyone has been reading about this big organization, the Muslim Brotherhood, that they will have a role in the government. I mean there’s no doubt about that.

KIM LAWTON, managing editor: And that’s different, right? I mean, they’ve been not having an influence, and so this would be a change?

ABDO: Yes, I mean, they’ve been a banned party, so this is a huge, huge change in Egyptian history, and they’ve been in Egypt since the 1920s, so this will be their first time to actually enter government.

ABERNETHY: There was a poll that came out this week taken by phone in Cairo and Alexandria asking questions about these things, and a very low percentage, 15 percent, said they approved of the Muslim Brotherhood. Has there been a change since years ago in that as a new generation has come up?

ABDO: Well, I think that the statistic that people that have used is 20 percent generally—that if there were free elections today, 20 percent of Egyptians would vote for Brotherhood candidates, but I think that could be sort of an underestimation.

ABERNETHY: But so what would that mean in a government if the Muslim Brotherhood or any strongly Islamist group had influence?

ABDO: Well, there are a lot of parties in Egypt. There are a lot of political parties, as we all know. Some of them are secular, some are nationalist. The Brotherhood is only one of them. However, the Brotherhood is very well organized, and they’ve been around for a long time. They’re a social, also, organization. They run hospitals. They do a lot of sort of social work in Egypt. So they are very, very influential. 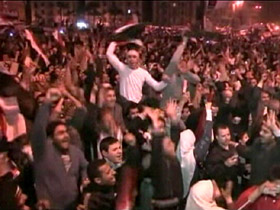 ABERNETHY: But in terms of policies, what would it mean—a policy, for instance, of Egypt toward Israel or toward the United States?

ABDO: The Brotherhood’s position today—and actually one of their leaders has been on television answering that question and he’s been reluctant to answer. He says we don’t know yet. Let’s not talk about foreign policy. But historically, the position of the movement has been against the peace agreement with Israel.

LAWTON: One of the issues I’ve been interested to watch is different representatives from the Muslim Brotherhood this week were sort of doing a Western PR campaign, and many of them said we want to have democracy but we don’t want it to look like American democracy per se, and they said they do want to see Islamic values somehow incorporated into a new government. But I think that’s what has people wondering, well, what does that mean in terms of everyday life in Egypt?

ABDO: Yes, and I think that this is something—I mean, if you can imagine, even for the Brotherhood I don’t know how they could answer this question, because they’ve never been in power. But I think that what they want—and they’ve been very clear they are for democracy, but as you say, not a Western–style democracy, and they want—whatever government the new government comes to be in Egypt they want it to reflect the values of the society.

ABERNEHTY: What does that mean, “the values of society”? Does that mean the same as strongly Islamic values?

ABDO: Well, I’ll just give you an example, okay? When the Brotherhood wrote a draft party platform three years ago, they said that they wanted a group of scholars to vet laws passed by the parliament to make sure that they conformed with Islamic values, so that’s one thing they have proposed. 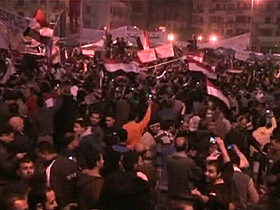 ABERNETHY: For instance, relating to women?

ABERNETHY: Would an Islamist government or a government with strong influence from the Muslim Brotherhood—would it be different as far as attitudes towards the United States are concerned?

ABDO: I do think so. I think that we have to be very careful not to be alarmist at this point, but I do think that not only the Brotherhood but many Egyptians actually believe that they should be sort of not so reliant on the aid that they receive from the United States, and they want to be more in charge of their own destiny.

LAWTON: There’s been a lot of different countries that have tried to incorporate Islamic values and democracy. What are the challenges? You know, some people say, is democracy compatible with Islam? Is this a new experimental point?

ABDO: I think it really is, and if we, even though this has been written about so much this week, I think if we take the two models we know of now, right, Iran and Turkey, I think that we are looking at a future Egypt that resembles Turkey much more than it resembles Iran. And Turkey, let’s face it, I mean Turkey’s been very successful. They have a vibrant economy, and they have so far been able to walk this tightrope, and I know that that’s something—

ABERNETHY: So we would not be looking at a theocracy.

ABERNETHY: What about the other religions in Egypt—the Copts, for instance, ten million of them? What’s the outlook for them in a new kind of government?

ABDO: The Copts, as we all know from reading the papers, have been the target of a lot of violence in Egypt, and I think that we know also that some of this violence has come from the state security services and the forces. So if there is a new state presumably there will more religious tolerance, I mean, we can only hope so. Just today, for example, there was a report that the current interior minister may have been involved in the attack on a church in Alexandria.

ABERNETHY: We have to leave it there. Geneive Abdo, many thanks.

ABDO: Thank you, nice to be here.