BOB ABERNETHY, host: At this weekend’s 53rd annual Grammy awards, the Recording Academy honors the best in the music industry. Among this year’s recipients is legendary gospel singer George Beverly Shea, who is receiving a lifetime achievement award. Beginning in 1947, Shea was the featured soloist at Billy Graham crusades. Last week, he turned 102. Kim Lawton spoke with him.

KIM LAWTON, correspondent: At 102, George Beverly Shea still sings as often as he can. He says singing is an important part of his spiritual practice.

GEORGE BEVERLY SHEA: You know, you keep tuned up with the Lord when you love the songs that are written about Him.

LAWTON: Shea and his wife, Karlene, live in Montreat, North Carolina, near their longtime friend, Billy Graham. A Canadian pastor’s son, Shea says music was always part of his life. He was working at a Christian radio station in Chicago in the 1940s when his baritone voice caught Graham’s attention. 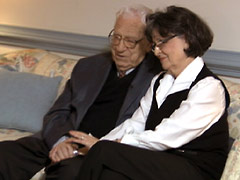 SHEA: Mr. Graham phoned me and then wrote me and asked me in 1947 to become a part of his team: “Sing a little quiet song before I speak.”

LAWTON: That began a relationship that has lasted more than 60 years. Shea sang at almost every Graham crusade. Shea says it was a privilege to be on the Graham team. He says his favorite part of the crusades was watching all the people stream forward after Graham gave the altar call.

SHEA: Your head is supposed to be bowed in prayer, but I like to say I peeked a little bit, and I saw those thousands of people all during those 63 years coming forward.

LAWTON: According to Guinness World Records, Shea has sung before more people than anyone else—an estimated combined live audience of 220 million people.

SHEA: They didn’t come to hear me. They came to hear Billy Graham.

LAWTON: During his 80-year career, Shea recorded more than 70 albums and wrote several popular worship songs. He was nominated 10 times for a Grammy and won in 1965. He’ll accept the Lifetime Achievement Award along with several other music greats, including Julie Andrews, Dolly Parton, and the Ramones.

SHEA: Someone said, “Why have you been doing this all these years?” I put my thumb up to the air toward heaven, and I said I’ve been doing it for Him.

LAWTON: Shea says his faith keeps him going, and he sees every day as a gift.

SHEA: I don’t know when heaven will loom up for me, but we have to look forward to it. I hope there will be an organ up there to play. Oh, boy, I love organ music.