BOB ABERNETHY, host: Faith-based and international aid groups rushed to help victims of the catastrophes in Japan. It’s estimated that more than 10,000 people were killed by the massive earthquake and tsunami. Japanese officials say more than 450,000 are homeless and in need of supplies. Humanitarian efforts, however, have been severely complicated by radiation from four of the country’s nuclear reactors.

We get more from Dave Toycen, the president and chief executive officer of the Christian aid group World Vision Canada. We spoke to him by phone from Tokyo on Friday night (March 18). Dave, thanks so much for staying up so late to talk with us. Are you and the others doing relief work there, are you able to get to all the people who need help, and do you have the supplies you need to help them?

DAVE TOYCEN (President and CEO, World Vision Canada): Well, basically we do. We’re anticipating we’ll be raising somewhere between $10 and $20 million, so our team here has already spent, you know, a chunk of that because they know it’s coming. But of course we believe we’re going to be able to raise that amount of money, and of course that turns into supplies and things that we can provide here. So, yes, I am positive about that. 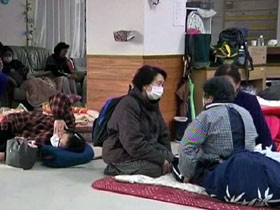 ABERNETHY: But you are able to, or the people who are in need are able to get help from you or from the government or from somebody else, right?

TOYCEN: Yes, generally so. My perception is, in the conversations we’ve had, what I’ve seen first hand, people are getting at least the basics of life. That means water, food on a daily basis, and most people now are in schools, gymnasiums, community centers, so that they are at least not out in the elements. It was minus four this morning with about ten, well, eight inches of snow.

ABERNETHY: What have you seen that moved you the most?

TOYCEN: Well, I think one of the things that moves me so much is in every one of these centers they have sheets of paper with people either saying yes, I’m alive and I’m at this location. The other ones that are even more poignant are the ones where you read where people are saying I am looking for my son, my daughter, do you know about them? And that always touches your heart. That just really, really touches your heart. And today I had a mother say to me, you know, this has been awful, but it’s my kids. The fact that my kids are alive, and children are precious because they remind us that life is about hope, and even our children in the midst of these difficult circumstances they still find the time to be happy and joyful. That’s humbling.

ABERNETHY: Dave, very quickly, we are almost out of time, but a lot of people are saying, well, we don’t need to give anything because Japan is a first-world country. It’s well organized. They don’t need as much help as perhaps people at other places and other disasters. How would you respond to them? 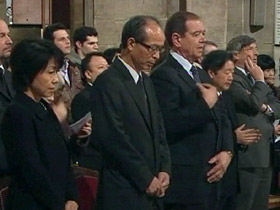 TOYCEN: Well, my first comment is yes, you’re right to a certain extent. They don’t need as much help. This is a first-world country. But, on the other hand, my experience is that most of us, or many of us at least, when somebody’s in trouble we have a sense we want to help out in some ways. And then when you think about, even I think of. say. Hurricane Katrina in the United States, how much Americans appreciated, at least that’s the feedback I got, when people from Canada and other places in the world came in and pitched in and gave, either volunteered or gave some money. So I think everybody has to make their choice, and we’re so pleased at World Vision. We’ve had so many people who want to step up and say we’re willing to help in Japan and send a message of hope.

ABERNETHY: Dave Toycen of World Vision Canada. Many thanks.

Faith groups around the world held prayer services this week for victims of the disasters. Meanwhile, some observers have spoken about the strong cultural and spiritual resources the Japanese have displayed as they deal with the catastrophe. Reverend Maggie Izutsu is an Episcopal priest who is also an expert on Asian bereavement rituals. She lived in Japan for many years and joins us now from Austin, Texas, where she leads the organization the Rite Source. Maggie, welcome. 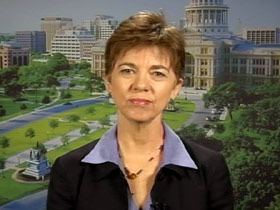 REV. MAGGIE IZUTSU: Thank you. It’s an honor to be here.

ABNERNETHY: As you see the way the Japanese people are responding to these tragedies, what stands out for you?

IZUTSU: I guess one of the things that my mind keeps going to is how they don’t ask the question “why me?” They’re not consumed with wondering what put them in harm’s way. They know they’re in harm’s way. They are very attentive to their surroundings, and they have a great reverence and fear of nature.

IZUTSU: Yes, I believe so. I think that partly comes from their Shinto tradition of this reverence for nature and their understanding of the vicissitudes of nature and capriciousness of nature. It’s also part of their Buddhist tradition that understands that all things are impermanent and things are subject to change, and they don’t see themselves as entitled to good fortune all the time or even good fortune ever. Of course, they seek that and they strive for that, but that’s not their focus.

ABERNETHY: We’ve seen a little disruption—frustrations of trying to get supplies and things. But, in general, the images have been of people who are very orderly and very respectful of each other. Talk about that a little bit. 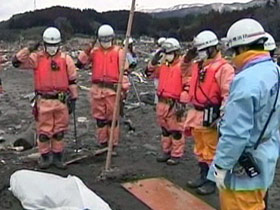 IZUTSU: Yes, well, I think that may come from very early training that is part and parcel of the Confucian tradition, which was imported from China, that seeks to make every opportunity in life—in daily life, secular life, as well as spiritual life or, more pointedly, religious life—an opportunity for moral self-cultivation, and it starts at a very early age. For instance, my son in a three-year-old’s class at nursery school’s teacher would talk about how she went home every night to try to understand how she could better inculcate a sense of little Johnny’s effect on little Tommy in terms of how he was behaving. So that sensibility of commiseration or empathy or understanding how our behavior affects other people starts there at a very early age.

ABERNETHY: And now there is the grieving and the rituals that are available, too, for helping people through that. What are the most important of those?

IZUTSU: The Buddhist tradition, as well as the new religions, have these very elaborate, very elongated memorial services—a sequence of memorial rites that go on literally ad infinitem, and they’re a wonderful occasion for families and friends of the deceased to come together at sporadic intervals to remember the deceased and share in the support that they can offer each other in that process. It also serves, I think, as a context for remembering the relative nature of our own egos, and the place that we have in this vast line of our ancestors and hopefully the progeny that will yet be coming, and to remember our place in society, and that also becomes a context for remembering that behaving well is a very important attribute of living.

ABERNETHY: Reverend Maggie Izutsu of the Rite Source in Austin, Texas. Many thanks.