RABBI GIL STEINLAUF (Adas Israel Congregation, Washington, DC): The Purim story is actually one of the books of the Bible. It’s called the Book of Esther or Megillaht Esther in Hebrew.

Jews today often think of it as a kind of fun, silly holiday. It’s kind of like Mardi Gras. It has costumes, and it has parties and festivals.

What really sets it apart as unique, in the Jewish tradition, is that it has specific mitzvot or commandments. We have to give gifts of food to each other. The most famous food that’s associated with Purim is what we call hamentoshen, and we have to give gifts to the poor, and we also have to sit down for a “seudah” or a festive meal together. We have to share the experience with community. 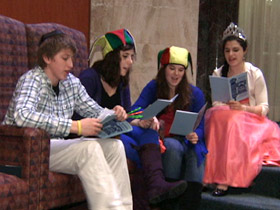 You have to hear the reading of the Book of Esther.

Reader: Moredechai told the servant that the Jews were to be killed by Haman and that Esther should go to the king to plead for her people.

STEINLAUF: When we talk about a terrible oppressor or enemy who has tried to destroy the Jewish people, there’s the expression “yemach shemo” which means “may his name be blotted out.”

Reader: Our enemy, replied Esther, is this wicked Haman.

STEINLAUF: So that’s taken literally. It’s not just a figure of speech. We give out noisemakers, which are called graggers. They swing them around and they make the noise. It’s as funny and as silly—as much as you can poke fun at the gravitas of life, the better. But, you know, it’s not just a child’s holiday. It’s actually a very sophisticated, very powerful spiritual message.

What’s most remarkable about the Book of Esther is God is not a character in the story. You never actually see God anywhere in the story. Esther is related to the Hebrew word “esther,” which means “hidden,” so that’s God’s hidden nature, and in a sense it reflects our ongoing sense of being mystified and curious about the fact why doesn’t God rescue us in the way that God rescued us from Egypt? And here in the story we see how, seemingly by chance, we managed to survive. What seems like chance is actually the surface of a much deeper reality, where God’s presence is working itself out in ways that we really can’t quite understand.

I think the deepest message of Purim is: You know what? It’s all ultimately okay. There really is a God even if we can’t find that God so directly. This world, like it says in the beginning of the Book of Genesis—it’s really “Tov M’od,” it’s really very good. We can even enjoy this world with all of its troubles and find reasons for joy.