BOB ABERNETHY, host: The situation in Libya remains uncertain. The Gaddafi government Friday (March 18) announced a ceasefire following UN authorization of outside military intervention. On Thursday (March 17), after a week of vigorous international debate, the Security Council approved establishment of a no-fly zone over Libya as well as “all necessary measures” to protect civilians.

What are the moral considerations that should guide a decision to intervene in another country? Kim Lawton took a closer look.

KIM LAWTON, correspondent: As the situation continued to deteriorate inside Libya, calls for international military intervention escalated. The UN’s resolution demanded a ceasefire, and if the violence doesn’t end, authorized enforcement of a no-fly zone and pledged to take “any necessary means” to protect civilians. But there are never easy solutions. 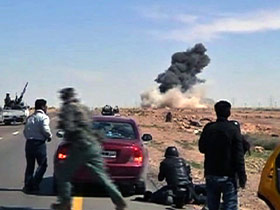 SHAUN CASEY (Wesley Theological Seminary): Whether you act or whether you don’t act, the stakes are really quite high, and that’s what makes it so daunting from a moral perspective: trying to find the right way to know when to intervene and when not to because the consequences, the body counts are quite high.

LAWTON: In the wake of the 1994 genocide in Rwanda, the United Nations hammered out a set of principles known as the “Responsibility to Protect.” The principles say that nations must protect their population from genocide, war crimes, crimes against humanity, and ethnic cleansing. And if a state doesn’t live up to that responsibility, the international community has a responsibility to step in. The United States has endorsed those principles.

PRESIDENT BARACK OBAMA (from Nobel acceptance speech, December 209): I believe that force can be justified on humanitarian grounds, as it was in the Balkans, or in the other places that have been scarred by war. Inaction tears at our conscience and can lead to more costly intervention later.

LAWTON: According to Casey, the principles draw heavily from the just war tradition, which says there must be a just cause for such intervention. 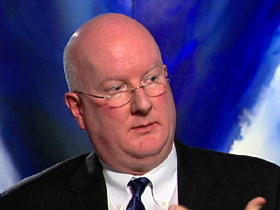 CASEY: What people need to be looking for, particularly with respect to Libya, is to what extent are war crimes being committed, are innocent people being directly targeted, is there something approaching genocide occurring on the ground at this point?

LAWTON: Once that has been determined, the next questions are who has the authority for approving an intervention and who has the responsibility of carrying it out?

CASEY: Simply because you may have a justification for intervention, that doesn’t answer the “who” question. Should France be the one who intervenes? Should Saudi Arabia intervene? Should the Arab League? Should the Africa Union? There are a lot of regional entities there that may actually have some resources that could be applied militarily.

LAWTON: Atrocities in and of themselves don’t automatically trigger intervention.

CASEY: Sure, we have a commitment to fighting injustice, but that doesn’t mean we’re going to go militarily instantly wherever injustice occurs. We have to ask the question “how large,” and do we actually have the empirical, sort of pragmatic capability to do anything about it?

LAWTON: Casey admits it’s difficult to know where that moral line is. 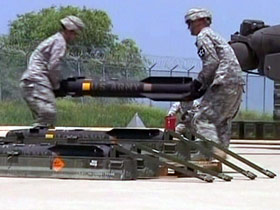 CASEY: Nobody is going to say, “Well, you have to have 50,000 people die before we go in.” So you have to take it case by case, and certainly in a situation like Rwanda, where hundreds of thousands of people were butchered, in retrospect you’d say, oh my goodness, of course that was on a scale that would’ve justified intervention.

LAWTON: Another question is whether there is what the just war theory calls a “reasonable chance of success.”

CASEY: So let’s say we do a no fly zone and Gaddafi still sends in ground troops and tanks and manages to defeat the rebels. Does the fact that we established a no fly zone mean we want to actually then put ground troops to deter Gaddafi if he continues to be successful?

LAWTON: Casey says concerns about potential success have so far prevented the international community from intervening in Darfur, even though there is strong consensus that atrocities continue to be committed there. He acknowledges that not acting in a particular situation can also be a moral failure.

CASEY: If you have the ability to intervene and to stop an injustice or stop an atrocity and don’t, I think you do have moral culpability as a result of that.

LAWTON: The moral questions are getting increasingly complicated, and Casey says they’re not going away any time soon.

LAWTON: All the more reason, he says, to stay vigilant in doing the moral calculus.