JUDY VALENTE, correspondent: The lumber shed at the Abbey of Gethsemani in northern Kentucky. It’s late February. Each night at 8:00 Brother Paul Quenon walks to the shed, as he has every night for 20 years. He goes around back, where he finds his mattress. This is where he will sleep—outdoors, no matter the weather.

BROTHER PAUL QUENON (The Abbey of Gethsemani): I can’t be a full-time hermit, but I can be a night-time hermit, and there’s something about waking up in the middle of the night, and there’s nobody around. There’s a kind of an edge of solitude that you cannot experience in any other way.

VALENTE: Here, a monk seeks to live every moment in the presence of God, in unity with God. Brother Paul came to Gethsemani 52 years ago. He was 17, inspired by reading the autobiography of the famous Trappist monk Thomas Merton, who introduced many Americans to the contemplative life. Merton would eventually become his spiritual director and would encourage Brother Paul to write. Thomas Merton said monks and poets are people who live on the margins of society. Brother Paul decided to become both. He says monks and poets remind us to pay attention to the world around us, to focus on what’s essential. 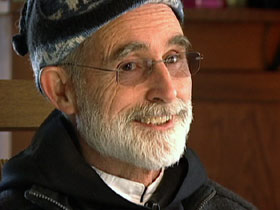 VALENTE: Indeed, many contemplatives say the transcendent is beyond words. Brother Paul has published three books of his poetry and is working on a fourth.

BROTHER PAUL: “The Hood”: —a hiding place / for the head / a portable anonymity / a refuge from / artificial light / a cover to make / dimness dimmer / to make time slow down

VALENTE: Ideas for his poems usually come to him on long, solitary walks across the monastery’s vast stretches of woods and fields. During each walk he writes a haiku—a Japanese form of poetry usually three lines, seventeen syllables and set in nature.

BROTHER PAUL: The monastery is a poetic context to begin with, and we live in a beautiful environment, and nature is so present day in and day out. I discovered the haiku, and the haiku is such a short form I started combining it with my meditation practice: 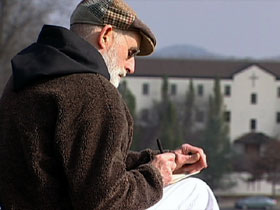 You’re in God’s beauty, and it’s physical. It’s almost like a symphony flowing by me as I walk along, relaxed, and it’s a beautiful experience.

VALENTE: Occasionally over the years, he would climb to the top of this water tower until finally the abbot closed it off. Brother Paul quips, “This used to be a fun place.”

It was this little cottage, The Hermitage, where Thomas Merton spent years in isolation, praying and writing. Retreatants visit the abbey year round, seeking to slow down at a place where prayer is the main form of activity.

BROTHER PAUL: I think they come here seeking for quiet and, you know, an atmosphere of prayer, and maybe some seeds of wisdom, and just to see what it is to live this kind of life.

VALENTE: What purpose do you see in living the Trappist’s life in the modern world?

BROTHER PAUL: Well, I think the purpose of the monastic life in the modern world is to show that we don’t need a purpose. The purpose of life is life, and you are to be just to be. Everybody measures their importance by how useful they are, so you need to shatter that. You know, somebody has to come along now and then just say listen, you know, that’s not it. That’s not what life is. 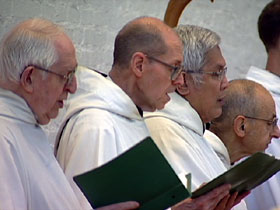 VALENTE: Forty-eight monks now live at the abbey. Once, there were more than 200. Brother Paul says many people are still attracted to the regular prayer and quiet rhythms of monastic life, but few are willing to stay.

BROTHER PAUL: I wish they would perceive the genuineness of the life. A man has to have, you know, a home and a career, and these are ways of achieving identity. Well, what we do is in a sense forsake our identity. We give up our identity to get a new identity, which really God formulates for us.

VALENTE: And yet Brother Paul says you don’t have to live in a monastery to seek what is important.

BROTHER PAUL: If you just sort of rest with what you have, be grateful for it, there again the chemistry of gratitude can transform what you have. Contemplation is simply maybe a big fat word for gratitude. To sense the presence of God in life and around me and in other people gives me a very deep gratitude.

VALENTE: Today the average age of the monks here is 70. Funerals are a regular part of life. 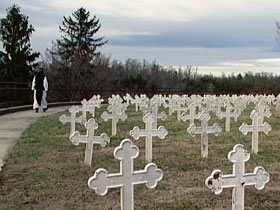 “Curved Walkway”: The burial ground fills with practical sounds from Tierce bell, drenching the dumb unheeding crosses. Alone I skirt around this rim of destiny, stirred by the bell… ‘til someday I’m left un-busied in this ground’s silent keep.

VALENTE: Brother Paul says that to be a monk is to live at the heart of a mystery, to live in a perpetual state of becoming. To him, that is both the power and poetry of monastic life.

BROTHER PAUL: We never get there. As Merton said, you know, if you think you have arrived you’re lost. People in the world come, you know, they come here on retreat. They ask me, “How long have you been here?” I answer as, what, another elsewhere, 52 years. But it is a fiction. How long have I been here? Excuse me, I haven’t gotten here yet.

For Religion & Ethics Newsweekly, this is Judy Valente at the Abbey of Gethsemani.