ABERNETHY: It’s been an emotional week since the dramatic US operation that killed Osama bin Laden in Pakistan. On Thursday (May 5), President Obama laid a wreath at Ground Zero. He met with loved ones of some of those killed on 9/11 and told them he hoped bin Laden’s death brought them a small measure of comfort. The president repeatedly cited the 9/11 attacks when he announced the operation on Sunday (May 1).

Obama: Justice has been done.

ABERNETHY: When the news broke, spontaneous celebrations began in front of the White House and across the country. That prompted vigorous debate about whether jubilation was appropriate. In some parts of the Muslim world, there were anti-American protests and vows of retaliation. Obama made a distinction between Islam and Al Qaeda:

Obama: Our war is not against Islam. Bin Laden was not a Muslim leader. He was a mass murderer of Muslims.”

ABERNETHY: Meanwhile, as details of the raid emerged so did moral questions about the bin Laden mission. Joining me with more on all of this is our managing editor Kim Lawton and Ambassador Akbar Ahmed, a former Pakistani diplomat, now the chair of Islamic studies at the American University in Washington. Akbar, welcome. Kim, welcome. Akbar, let’s start with the popular reaction in the Muslim world. 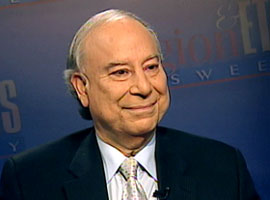 AKBAR AHMED (American University): Bob, the reaction to bin Laden’s death tells us a lot about what’s going on in the Muslim world. There have been threats, there have been some explosions, people were killed in Pakistan. There have been processions being taken out by the religious parties mainly, but what it’s telling us is that over this decade from 9/11 the leadership model of Bin Laden has become almost irrelevant. You’re seeing this revolution sweeping the Arab world. It’s being led by young people wearing jeans, and Facebook, Twitter. They want an inclusive society, a democratic society. They want to be part of the world order. They don’t want to blow up America or Israel or whatever.

ABERNETHY: But are you saying that Osama Bin Laden was kind of yesterday’s leader?

AHMED: Conceptually, yes. Bin Laden is suddenly, to me, as an analyst writing about the Muslim world for the last several decades, overnight he seems almost like a dinosaur. His methods failed. His vision still resonates. Muslims would still like to have justice and dignity and so on, but his method of achieving these means seems to be dated and irrelevant in today’s Muslim world.

ABERNETHY: But in this country he was very, very much an important figure.

AHMED: The dominant symbol of 9/11, because rightly he was linked to this terrible event and then the chain of events that followed which resulted in, over this decade, the deaths of literally millions of people, displacement of millions of people.

ABERNETHY: And Kim, in this country?

KIM LAWTON: Well, I was going to say that I’ve been hearing from a lot of American Muslims who were saying that for them he had so much highjacked Islam and highjacked the perception from non-Muslims about what Islam was that there this is a certain sense of relief that maybe that is now finished. 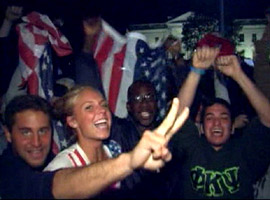 ABERNETHY: But what about on the street? The popular reaction here, the kids cheering.

ABERNETHY: And everything like that. A lot of people were very upset about that.

LAWTON: There’s been a really lively debate within the religious community about whether or not those celebrations were appropriate, and both sides have been using Scripture passages to sort of bolster their arguments. Some people saying that Scripture says that one should never rejoice when one’s enemy falls. But then others saying Scripture says that you should rejoice when good wins over evil, and so there’s been a little bit of debate. The Vatican issued a statement saying while Osama Bin Laden certainly was responsible for sowing hatred and division, one should never rejoice over another human being’s death.

ABERNETHY: And is there any agreement about where justice ends and revenge begins?

LAWTON: Well, that’s been another big topic of discussion. Where are those lines? And a lot of people saying, as President Obama said, justice has been done. But then other people questioning, was this revenge? Or when you see the celebrations does it appear that it looks more like revenge than justice?

ABERNETHY: Akbar, there are a lot of other people watching this besides Pakistanis and Afghanis and Americans and all. What does this open up in the way of imitation? Do you hear anything about that?

AHMED: I do, Bob. In fact, a lot of people in Pakistan are commenting on this. They’re saying that if America just flies in, kills someone, takes the body out, then this is a precedent for other people in the neighborhood, and Pakistan and India have had a very tense relationship for the last half-century, three wars between them. India’s been wanting the people behind the attacks in Mumbai, former city of Bombay. They want them. They want to try them for terrorism. And a lot of Pakistanis saying, suppose India does the same thing, just flies in, kills these people, takes their bodies out. What is there to prevent people from doing this kind of copycat imitation of what the Americans did? 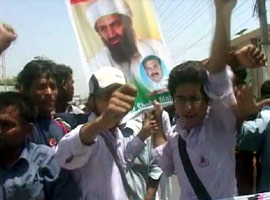 LAWTON: There, well, it has been a debate about the means that were used in this and whether they were ethical or legal. And that’s a hard thing to say, because for a lot of people this is obviously a very emotional thing.

LAWTON: And that’s what people are saying. That he was an enemy combatant in a field. But the fact that it happened, this war on terrorism has very unclear lines. There are some questions about that. And, in fact, the United Nations has asked for more details about exactly what happened and was it legal, was it ethical. So that’s a conversation that’s going to continue, I think.

ABERNETHY: And it also opened up the question of whether torture is worth it, Akbar?

AHMED: I would say, Bob, go back to the founding fathers. Read George Washington on torture when he refused to torture British soldiers who had been torturing American soldiers because, he said, America must always take the high moral ground, and that is critical for this new country that we are founding, the United States of America.

LAWTON: It’s unclear exactly how much information that led to all of this was obtained through these enhanced interrogations.

ABERNETHY: But we didn’t know that.

AHMED: We don’t know. So therefore you can’t build up the argument that the information came through torture.

AHMED: Not only these two countries. I would say the United States and the Muslim world. Because the war on terror, whether you like it or not, Bob, was driven by the symbolism of bin Laden, who towered over the horizon. He’s dead. It’s closure. Both the leaders of the Muslim world and the Untied States should really pause, reflect, take this moment and say it’s been a decade of death and destruction, so much pain and misery through out the world, let us now move towards a different direction. A world of peace and harmony and challenging the global problems that we face. There’s so many global problems facing us right now, and the United States can and must take the lead. This is the superpower, it has a moral vision, it must now lead us in that direction.

LAWTON: And I heard that a lot this week from the religious community. A lot of people whether they thought this was a good thing or they were celebrating or not, just the idea that indeed this is closure for one era and a lot of hope that we are being a new era.