MARTINA BAGNOLI (Curator, Walters Art Museum): A relic is usually a remains of the body of a holy person, could also be something that this holy person had touched. The saints were not touched by sin, and therefore their remains were imbued with the grace and the power of God. Therefore if you prayed to a relic, that is a kind of way of channeling your prayer to heaven. You don’t worship the relics or the saint. You venerate them, and that distinction is precisely in order to avoid falling into idolatry. 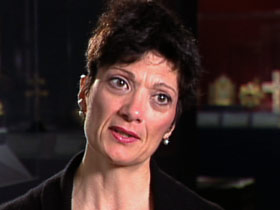 From the beginning of Christianity, artists were enlisted to create precious containers that would speak of the spiritual power of the content. According to doctrine, Christ and Mary ascended bodily to heaven, so we do not have bodily relics of these two very important figures of Christianity. However, we have reliquaries of the hair of Mary or the milk of Mary. Mostly for Christ you would have relics of the True Cross or other instrument of his passions.

Mary Magdalene and John the Baptist, of course, as well as, you know, Peter and Paul are very precious relics. Here we have two very important reliquaries containing these teeth. In the case of John the Baptist it’s encased in a very elaborate, beautiful container made of gold and rock crystal.

The Church throughout Christianity was worried about fraudulent use of relics and commerce of relics, and of course to attract pilgrims you needed the relics, so there was a lot of struggle sometimes to get important relics to your church, and sometimes they were even stolen, of course. 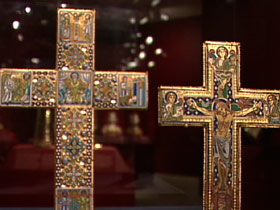 Throughout Christianity already from the fourth century onwards we have a lively debate within the Church on the orthodoxy of relics veneration. So you have periodically this outcry against the abuses and the point of it all. After all, Christian religion is about achieving something spiritual, not praying to something material.

I love the arm of Saint Luke. The gesture of the hands really reflect the personality of the apostles in question, Saint Luke being the writer of the Gospel. The hand is shown holding a pen, and also, of course, you have to remember that Saint Luke was also an artist.

Baudime is one of my all time favorite. I think that the way that the saint gazes at you is uncanny and quite unsettling.

In the twelfth century onwards you see bust and heads that are shaped and made with gleaming material, gold or gilded copper, and decorated with precious stones to portray the saint as a dweller of paradise. In the later Middle Ages and the Early Renaissance, the beauty of the material is here substituted with the actual natural beauty of the women. It’s beautiful in that paradox between the beauty of the girls and the lusciousness of their hair, and at the same time the idea that you can lift the top portion of the head and see the skull in it. The relationship between the horror of the relics and the beauty of the exterior, I think, is what fascinates me.