FRED DE SAM LAZARO: As one pastor put it, “This is a King among presidents.” A memorial to the Reverend Martin Luther King Jr. was unveiled in Washington this week, the first individual who’s not a president to receive such a tribute on the National Mall. A 30-foot statue lies at the heart of the granite monument that displays words from King’s writings and speeches. The choice of a Chinese sculptor and royalty payments to King’s family drew controversy and complicated the $120 million private fundraising effort. Congress authorized the monument in 1997. Despite the postponement of the memorial’s dedication because of Hurricane Irene, this weekend was still a time of reflection. Here to share his thoughts is the Reverend Dr. Robert Franklin, president of Morehouse College in Atlanta, which is also the alma mater of the late civil rights leader. Dr. Franklin, welcome.

DE SAM LAZARO: This unveiling comes at a time of serious political polarization in this country. Do you think that the monument has the potential any way to provide some healing in that divide? 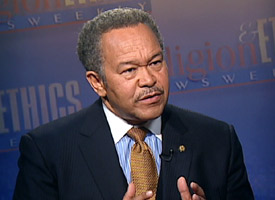 FRANKLIN: I believe so, and I certainly hope so. Dr. King was a man of healing and reconciliation even in the context of calling for justice. American politics is broken today, and Dr. King’s message, his life, his values and virtues can offer us a strategy for healing what is broken. It means political opponents must never dehumanize each other. They must speak truth to power, but they must also be willing to negotiate as well as confront, and I think the King memorial will be an inspiration and a reminder that that reconciliation is possible in America.

DE SAM LAZARO: What do you think his words would be today in this political environment?

FRANKLIN: Well, that we have to listen. We have to search for common ground, something that Dr. King learned from Howard Thurman and Benjamin Mays at Morehouse College, and that it’s never appropriate to dehumanize or demonize your opponent. We must always recognize their humanity and recognize their self-interest and try to appeal to that. That’s why King was such a genius as a moral leader. He confronted, but he balanced that with negotiation, and today all I hear from so many of our public officials, religious leaders, media commentators is confront, confront and polarize. Dr. King says no, you’ve gone overboard, and there’s another side to balancing this for the common good.

DE SAM LAZARO: One of the points of contention in the debate over this monument has been the whole issue of separation of church and state and the dedication of something to someone who is not—just not even a president but also at his core was a Baptist minister. Talk a little bit about it in that context.

FRANKLIN: Well, you put your finger on a fascinating question, because we’ve grappled for the past decade-and-a-half with the question of church and state and the appropriate presence of religion in our very diverse public life. I think that Dr. King actually offers a refreshing model of how you can be a religious person, a person of faith in the public square. How? Well, he was exceedingly ecumenical and interfaith. He respected the traditions, the texts, the beliefs and practices of other people without ever disrespecting or dismissing or marginalizing them, and although King was exceedingly particular, I mean, as you say, he was a black Baptist preacher from the South, he was also always in search of what’s universal in my particularity, and I think that’s an invitation to all Americans, and when we look at that monument I hope we see King saying I’m looking for common ground, not for the basis for further polarization.

DE SAM LAZARO: Well, Dr. Franklin, thank you so much for sharing your thoughts today.

FRANKLIN: Thanks very much.