KIM LAWTON, correspondent: At the height of last year’s devastating famine in the Horn of Africa, Rajiv Shah, administrator of the US Agency for International Development, visited a refugee camp in Kenya. There were thousands of families who had walked for days to escape starvation in Somalia. He says one woman’s story particularly touched him.

DR. RAJIV SHAH (Administrator, US Agency for International Development): Along the way, she literally couldn’t continue to carry both of her kids, and she had to make this gut wrenching choice about which child she would carry to safety and which one she would leave behind, and that’s the kind of decision that no mother should ever have to make.

LAWTON: Shah says encounters like that bolster his conviction that the US has a moral obligation to help ease suffering around the world. It’s an obligation, he says, that’s also in America’s strategic interest.

SHAH: We’re a nation based on moral values, and when we express those values to communities around the world, we’re showing them an America that is an optimistic America, an inclusive America, and a country with whom they want to partner and not fight. 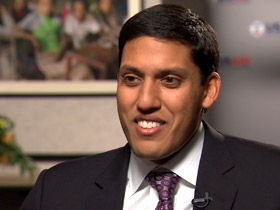 SHAH: We want to do our work, which is about protecting people who are vulnerable around the world and expanding the reach of human dignity, as broadly as possible. and often it is communities of faith, faith-based organizations, that are there working when the rest of the world has forgotten about people who have no other place to turn.

LAWTON: At 38, Shah is one of the Obama administration’s youngest top-ranking officials. He is Hindu and says his interest in humanitarian issues was first fostered by his parents, who immigrated to the US from India.

SHAH: When I was seven or eight years old, I don’t remember exactly when, I went to visit India, and they took me through slum communities just so I could see how people lived. And I grew up in suburban Detroit. I’d never been exposed to that before. And when you see other kids your age, when you’re seven or eight years old, living in entirely different circumstances, it affects you in a very profound way, and it has led to a constant motivation I’ve had.

LAWTON: Shah took over at USAID on January 7, 2010, just five days before the catastrophic earthquake in Haiti. He was immediately pulled into managing what would become the largest humanitarian response in history. After the quake, USAID worked closely with several faith-based organizations to provide food and shelter. Shah says he saw firsthand the effectiveness of those groups. 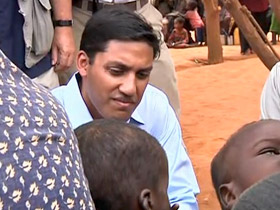 SHAH: Partners like World Vision or Catholic Relief Services that take the time to engage with communities they’re trying to serve, that are willing to be there for the long run, that work in partnership and cooperation with governments so that they are coordinating their efforts and getting the most out of what we—the investments we make.

PRESIDENT BARACK OBAMA (delivering speech): I want to acknowledge one particular member of my administration who I’m extraordinarily proud of and does not get much credit, and that is USAID Administrator Dr. Raj Shah, who is doing great work with faith leaders. Where’s Raj? Where is he? There he is, right there.

LAWTON: Under Shah’s leadership, the Obama administration has increased its partnerships with religious groups by more than 50 percent. According to Shah, USAID now has 115 different partnerships with organizations of faith around the world, and he hopes to expand that even further.

LAWTON: What is it that faith groups bring to the table in these partnerships?

SHAH: Well, I think it’s a core motivation that’s driven by a desire to get results. Organizations that are committed to the outcomes, that measure results, that ensure that scarce taxpayer dollars are in fact benefiting those who are most vulnerable often are communities of faith, and we want to work with them to achieve those results.

LAWTON: Government partnerships with faith groups have been controversial. Some critics worry about the US being tied to the religious mission of a particular group or taxpayer money being used for explicitly religious activities, such as evangelizing.

SHAH: Those are not activities we support. You know, we have a very clear set of defined outcomes and results that we’re willing to finance and that we believe we can support, and, you know, frankly, if you look at the broad range of what faith community groups are doing around the world, it’s actually service. 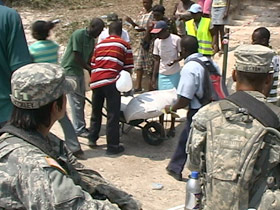 LAWTON: Another controversial partner has been the military. Some nongovernmental groups have criticized the growing role of the US military in disaster relief, especially in areas where the US has been at war. But Shah says it can work. He cites Haiti as a model.

SHAH: Many of our NGO partners and others who had previously been sometimes nervous about working with the military came back and said, wow, they were, they were great to work with, they were so responsive to our needs and the needs of local communities and they were really there to serve. And I’m just very proud of the way American men and women in the armed services conducted themselves in Haiti, and they made us all proud.

LAWTON: Is there a concern, though, about the perception of the US humanitarian arm too linked with the military side?

LAWTON: Shah says in an era of budget cutting, US faith leaders from across the religious and political spectrum have played an important role lobbying Congress to keep funding for programs that help the world’s poor. 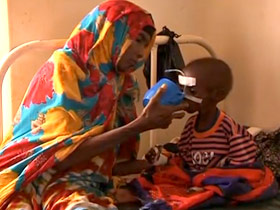 SHAH: When people see that great coming together, it reminds us all that on some basic moral issues, we can stand together even in sometimes partisan environments.

LAWTON: But he admits in the current climate, it can be difficult to make the argument to maintain foreign aid funding, even though it represents less than one percent of the federal budget.

SHAH: At the end of the day when you ask Americans what we should be spending abroad, they’ll say about 10 percent of the budget. Unfortunately they believe we spend 20 percent and so we have a lot to do to communicate the fact that this is a relatively small investment.

LAWTON: Shah says resources must always be allocated for humanitarian disasters. But he says the administration wants to put a new focus on long-term initiatives as well.

SHAH: It turns out that for about a tenth the cost, somewhere between one-eighth and one-tenth the cost of feeding someone for a year, you can help invest in their ability to move themselves out of poverty.

LAWTON: And he says the government is well aware that communities of faith have vast potential resources that can be enlisted in the battle.

SHAH: There are 330,000 congregations in this country that represent–I think the top ten alone reach more than 100 million people. You know, if we could just reach a small fraction of that community, that’s our vision of success.