DELMAR HOLBROOKE: I’m really getting ready for 90, “the big 9-0.” My family is already planning it. I am going to ski up at Mountain High early in the morning, come down and play a round of golf, and then head out to the beach to surf.

GONZALEZ: You’re not a sit on the couch kind of guy? 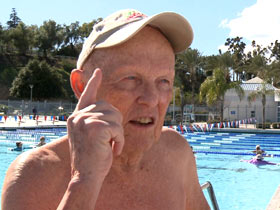 GONZALEZ: Holbrooke credits his energy to a life of exercise and healthy eating, but also his faith.

(to Holbrooke): Would you be as healthy as you are, in your opinion, without your faith?

HOLBROOKE: Oh, no, no. I am what I am because of my faith. To me that is just as clear as can be.

GONZALEZ: Like many other residents of Loma Linda, California, Holbrooke is a Seventh-day Adventist. That’s the Christian denomination that observes the Sabbath on Saturday. Adventists also emphasize a healthy diet and lifestyle as important expressions of their faith, and because of that emphasis, researchers say Adventists often have remarkably good health.

PROFESSOR LARRY BEESON (Loma Linda University): Adventists have an evidence of living longer and dying at a later age. They die of the diseases of the general population, but at a much later age—eight, ten years later.

GONZALEZ: Larry Beeson is an associate professor of public health and epidemiology at Loma Linda University. It’s a health and science institute affiliated with Seventh-day Adventists that’s been studying members of the faith since 1958. 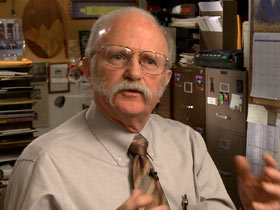 BEESON: …through a variety of different things. It’s not just one thing. It is their religious—how they relate to God and their fellow man, their diet, their exercise, their avoidance of tobacco and alcohol. All of that collectively contributes to longevity.

GONZALEZ: And because it has such a high percentage of Adventists who live long and active lives, researchers have dubbed Loma Linda one of five so-called health Blue Zones in the world.

BEESON: A Blue Zone is just an area where there is an unusual occurrence or more than what we would expect of people who live to be the late 90s, early 100s.

GONZALEZ: Diet seems to be especially important to Adventists’ good health and long life expectancy. Nearly 30 percent of Seventh-day Adventists practice some form of vegetarianism compared to only about three percent for the US population as a whole. In fact, at many Adventist institutions, such as the Loma Linda Health Center, only vegetarian meals are served.

PASTOR DANIEL MATHEWS(Loma Linda University Church of Seventh-day Adventists): I do follow a plant-based diet and have followed a vegetarian diet all my life, and I know you and all your viewers are going to look at me strangely, but I never tasted any meat.

GONZALEZ: Dan Mathews is a third-generation Seventh-day Adventist and a pastor. We talked to him about the connection between diet, health, and religious belief within his faith tradition. 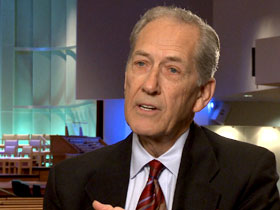 VIRGINIA CROUNSE: I feel good. Yeah, I do. I feel energetic.

GONZALEZ: We met seventy-three-year-old Adventist Virginia Crounse as she was relaxing in a whirlpool. She shared her diet and fitness routines with us.

CROUNSE: I actually eat most of the time two meals a day. I’ll eat like granola or oatmeal for breakfast with two or three fruits, fresh fruit. As long as I can remember, I exercise daily, at least six days a week. I walk at least two miles, rain, sun, or snow.

GONZALEZ: It’s not well known, but Seventh-day Adventism has already made its mark on American culinary history in what millions of people eat each and every morning. It’s the creation and mass marketing of breakfast cereal by a guy named Kellogg. That’s John Harvey Kellogg and his brother, Will Kellogg, both Seventh-day Adventists who developed corn flakes, one of the first mass-marketed breakfast cereals, in the late 19th century. They saw cereal as a health food alternative to the fatty breakfast foods of their day. 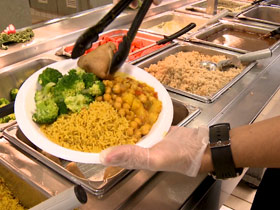 BEESON: Corn flakes and the other kinds of foods that came out of the Kellogg’s industry was really trying to deal with the whole grain thing and not trying to throw away all the nutrients when you refine and become white bread. You’re throwing a lot of nutrients away.

GONZALEZ: In our own time, as Americans search for ways to improve their diets and health, some researchers believe they can borrow some simple lifestyle ideas from Seventh-day Adventists.

BEESON: Reducing your smoking, reducing your saturated fat intake, exercising more—all that can be done by anybody. They don’t have to become an Adventist to gain the benefits that we’ve observed in the Adventist health study.

GONZALEZ: It is accessible to all of us.

GONZALEZ: At the pool, Delmar Holbrooke has his own advice.

HOLBROOKE: You have to keep your mind alive and continuing to grow, and your body just as much.