BOB ABERNETHY, host: Now, more on how the pope’s trip this week could affect Roman Catholics in Cuba. Joining me are Kim Lawton, our managing editor, and Patricia Zapor, a staff writer with Catholic News Service who was recently in Cuba. Pat, as recently as last month you were there, weren’t you?

ZAPOR: Well, Cubans want all sorts of freedoms, religious freedom among them. Atheism officially went away in 1992, and since then the Catholic Church has been creating more space for itself, and in ways that are trying to reach out to more Catholics, more of the general population of Cuba, and people want to participate in these things. There’s an energy.

ABERNETHY: But I think it’s, what, just a little over half of people who identify themselves as Catholics, and five percent of them only who go to Mass. 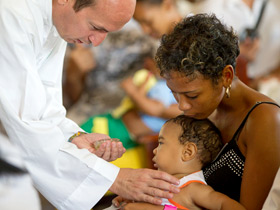 ZAPOR: Yeah, 60 to 70 percent of Cubans identify as Catholics. But people get their babies baptized, and they come back for funerals. So people are very culturally Catholics. It’s just the stuff in the middle that they’re out of the habit of participating in.

KIM LAWTON, managing editor: How are they hoping that the visit of Pope Benedict will affect their lives, will maybe provide more space and more openness?

ZAPOR: Well, when Pope John Paul II visited in 1998, that led to new openness for the church, to the church being able to have outdoor celebrations for Easter and so on. And it also led to release of political prisoners and all sorts of other types of openness. And people have great hopes that that will happen again, that this pope will encourage and help prod the government to new openness in a whole variety of ways.

ABERNETHY: If a Cuban Catholic wants to participate openly in the church, and not hiding anything, is that person free to do so, or are they persecuted in some even informal way if they’re religious?

ZAPOR: I don’t have the impression that there’s ongoing persecution of people who just participate in the church. We did hear stories of people who very recently, for instance, a university professor lost a job after being on the board of a highly boundary-pushing laity magazine. So people who press the boundaries a little too much might end up getting smacked back, but everyday practice, I don’t think that that is a problem.

LAWTON: The church leadership has had a delicate balance, haven’t they, trying to push the government on some things, yet also maybe partner with the government? 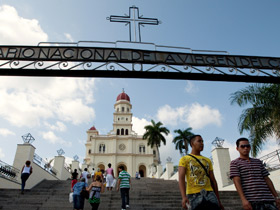 ZAPOR: Yeah, and that’s been very controversial among Cubans themselves, among Catholics, among Cuban Americans, as to whether any kind of dialogue with the government is helpful or not. But it’s been working. It’s been creating more space for the church to provide social services, to start an MBA program, to do all sorts of things that 25 years ago, even 10 years ago would not have been possible.

ABERNETHY: I read that there is one priest for every 19,000 Cuban Catholics. They’ve got a long way to go.

ZAPOR: They certainly do, and that’s even more dramatic than the situation of priest shortages around the world. That’s about as many priests as there are in the entire archdiocese of Miami in the whole country. But their laity networks are strong and very well-developed. That’s a situation that they’ve encouraged in these intervening years.

LAWTON: What are these house churches that you’ve talked about? How does that work?

ZAPOR: Well, in places where there isn’t a convenient church, people develop ministries within houses and neighborhoods. I encountered one parish that consists of nothing but 42 house churches. They don’t have a building. They have 42 house churches; that’s their parish.

ABERNETHY: You wrote a piece saying that Cubans want, Cuban Catholics, want more, more of everything.

ZAPOR: Right, and they’ve been getting more. More freedom, more services, well, more priests, of course, but a little bit more of everything.

ABERNETHY: And you think that this visit by Benedict will lead to that?

ABERNETHY: Patricia Zapor of Catholic News Service, many thanks.