BOB FAW, correspondent: If you’d like to know what a hospice chaplain does, watch Kerry Egan in New Bedford, Massachusetts as she visits seventy-one-year-old Jim Burgo, who didn’t want his face shown and who is dying from liver disease.

FAW: At life’s end, when Burgo is anguished and needs to talk about dying, the hospice chaplain listens and comforts.

BURGO: There are a lot of things about Vietnam that I am not proud of either.

KERRY EGAN: And I think God forgives those things.

BURGO: I hope so. I really hope so.

FAW: If one aspect of her healing ministry can be somber, her visit to the Fall River home of ninety-seven-year-old Mary Labrie shows another. 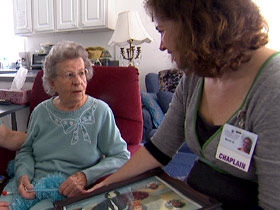 Singing: “When we all see Jesus, we’ll sing and shout the victory.”

FAW: Here the mood is upbeat, because Mary, unlike Jim Burgo, faces death with absolutely no fear—indeed, looks forward to being in heaven and being reunited with her late husband of 75 years.

MARY LABRIE: Oh yeah, I’ll see them again. We will all be together one day.

LABRIE: Oh, that will be wonderful.

FAW: Kerry Egan counsels people of all different faiths, and not all of her patients are religious. But the common thread in her work, she says, is helping people give meaning to their lives.

EGAN: How do you make sense of all of this that is going on in your life? For every person that I go in to see, my goal is the same, which is to find out what their goal is, to help them meet it.

FAW: A chaplain for thirteen years, Kerry Egan says that what is crucial is learning how to listen.

EGAN: I hear terrible stories sometimes—terrible stories, and the most compassionate thing you can do is not turn away. Oftentimes for you to go in and say, “It’s okay. It’s okay,” when they full well know it is not okay, it shuts them up. So now they can’t say, “I’m frightened. I’m angry. I’m confused,” because now they need to act like everything is okay. 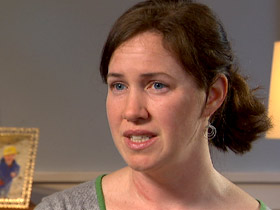 FAW: Listening is the most important thing?

EGAN: Yes. Deeply listening to what it is they’re saying.

FAW: Kerry says something was brewing with Jim Burgo. Finally, she understood. His father had taken him away from his mother when he was very young, and Burgo was afraid it was going to happen again.

EGAN: So are are you afraid that you will die and you’ll go to heaven?

BURGO: I am not afraid of going to heaven.

BURGO: That is very, very possible in my mind, yeah.

EGAN: Well, there’s no point in sugarcoating it, right? That’s not helpful. If someone is dying, and they’re sick, they know it.

(reading from Bible): “…teaching them to observe all things that I have commanded you. And lo, I am with you always…”

LABRIE: Oh, that is my favorite verse.

Some people really come to the end, and they feel good. You know, they’ve done a lifetime of work and of thinking about this and they just want someone to be there with them, to sort of enforce those strengths they already have.

FAW: But others struggle, and Kerry Egan tries to see them come to terms with what ultimately matters. 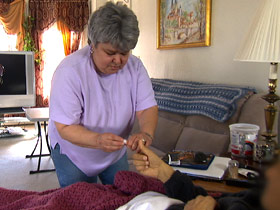 FAW: For a while, what Kerry couldn’t understand was why her patients talk to a chaplain so much about their families.

EGAN: It took me a long time to realize that is how people are talking about God. Again, they might not use the term “God,” but that’s how they talk about ultimate meaning. They’re trying to get at love. They’re trying to get at what God is. Jim is a great example of that. He was talking about his mother, and he was talking about love. What does the love of God look like? Am I going to get to see my mother again? Is the love my father showed me or didn’t show me, is that what God is like?

FAW: Raised Catholic, now an Episcopalian, Kerry Egan isn’t always successful. One patient actually threw a bedpan at her. But Jim Burgo’s wife, Elaine, says that every time hospice chaplain Egan visits, Jim isn’t the only one who benefits.

FAW: Just a few months ago, Mary was near death. Kerry and the hospice team brought her back to good health, and it was only with Kerry, says Mary’s daughter, Judy, that Mary was able to reveal how she worried about the grief her death would bring her children. 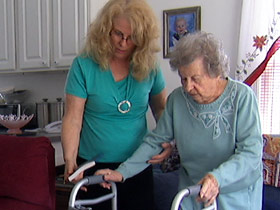 JUDY BIDDLE: It gave me that peace, knowing that Mom is not in denial, that she was just worried about us. She was worried about us children. That was really precious. You know, it’s so good to have someone from outside the family that she can share with, so that she might say things to Kerry that she might not feel comfortable sharing with me as a daughter.

FAW: Family members, of course, are not the only ones who appreciate Kerry.

JIM BURGO (to Kerry Egan): You make people better. You explain God to me. You’ve given me a whole bunch.

FAW: You read the Bible sometimes.

MARY LABRIE: I read it every day.

LABRIE: And there is some good information there to keep you going if you are concerned about things.

FAW: And seeing Kerry, does that help you keep going too? 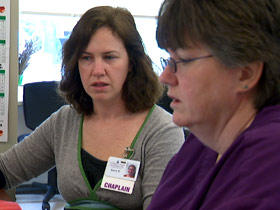 FAW: Kerry meets every day with members of the hospice team. This day she talks with nurse Patty Martin about Mary’s progress.

PATTY MARTIN (to Chaplain Egan): She’s walking around. She is eating better. She is gaining weight.

FAW: Mary is doing so well soon she will have to be taken off hospice care. That worries Kerry because for patients it’s hard to lose the care they’ve come to depend upon. It’s just another issue a hospice chaplain confronts. What helps her cope and decompress, says Egan, is a happy home life: two children, a supportive husband, two dogs. She prays, meditates, hikes, and dances. It helps, too, she concedes, to maintain a certain distance from her patients.

FAW: And when that distancing isn’t enough, Kerry says, she relies on her faith.

EGAN: That gives me a lot of strength to do this. To be able to say that this is not the end and that life is hard, and really hard things happen but that we can be with each other. We can help each other through it, and that is how God functions in this world.

FAW: With Jim Burgo or with Mary, Kerry Egan says she’s learned that while there are miracles, her role is not to be a miracle worker.

FAW: And what does Kerry get out of it?

EGAN: I get enormous joy. People know so much more than they think they know when they’re allowed to explore it themselves, and God is so much more present than anybody usually gives God credit for. And I get to see that. I get to know that.

FAW: Caring for them when their bodies are failing and their spiritual needs are crying out, too.

EGAN (to Jim Burgo): You’re such a good man.

BURGO: I am not, but someday…

FAW: For Religion & Ethics NewsWeekly this is Bob Faw in New Bedford, Massachusetts.

ABERNETHY: We are sorry to add that shortly after that interview Jim Burgo died.