BOB ABERNETHY, correspondent: We have a profile today of one of the most respected rabbis in the world. He is a seventy-four-year-old Israeli, Adin Steinsaltz, the author of 60 books on ethics, theology, prayer, and mysticism, with a few mystery novels included. Rabbi Steinsaltz is most admired for a monumental project that took him 45 years, sometimes working 17 hour days. He translated the Babylonian Talmud from ancient Hebrew and Aramaic into Modern Hebrew. The Torah is Judaism’s holiest text, Genesis through Deuteronomy. The Talmud is commentary on the Torah. But in its original languages, the Talmud was studied primarily by students and scholars. Now, the Steinsaltz Talmud makes it available to everyone.

The holiest site in all Judaism is in Jerusalem, the Western Wall of the Second Temple, destroyed in the year 70. The devout come to the wall to pray, and so do many thirteen-year-old boys at the time of their Bar Mitzvahs, when they take on the full responsibilities of adults. One of those duties is studying the Torah, with its 613 laws about how to live. The Torah, for Rabbi Steinsaltz, is a divine guide, a map of the paths and the main road through a world of danger and blessings—in his words, lions and angels. 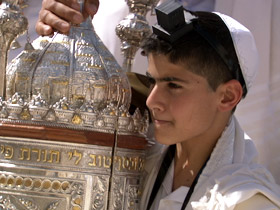 ABERNETHY: Holy as the Torah is, its laws are in some ways unclear. For instance, it requires keeping the Sabbath, but it never explains exactly how. So the Talmud emerged, first as an oral tradition, later written down—centuries of rabbinical commentaries interpreting the Torah’s laws and arguing over them. Rabbi Steinsaltz began his translation of the Talmud when he was 28. It took him 45 years and ran to 45 volumes.

RABBI STEINSALTZ: It was necessary because it is an important book. I once called it the center pillar of our culture.

ABERNETHY: Recently, Steinsaltz was in New York City teaching and explaining what is unique about the Steinsaltz Talmud—his own commentary and extensive background.

RABBI STEINSALTZ: You have here the original Hebrew, the translation in English, and then you have, you see, notes about the law. 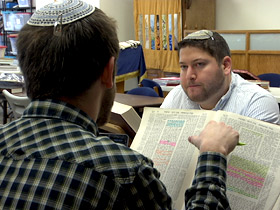 ABERNETHY: With his many books as well as his Talmud translation, the rabbi personifies Judaism’s commitment to learning and to argument as a means of understanding.

RABBI STEINSALTZ: The idea of the Talmud is that you are allowed to ask questions about anything, everything that can be done, encouraging you to ask questions, trying to find answers.

Yeshivat Chovevei Torah Rabbinical Students: And the rabbis let her then remarry. Even though there was only one witness.

ABERNETHY: Every day students and scholars around the world study and question and debate the meanings of the Torah and Talmud and the arguments of rabbis who have studied them. There is no single authority to decide how best to interpret the religious law, but argument over the centuries can lead to general agreement—until the next question and the next argument.

Steinsaltz was raised in a secular Jewish family, but his father insisted he study the sacred texts so he would not grow up ignorant. I asked him how he became religious.

RABBI STEINSALTZ: It was almost spontaneous. I don’t know where that came from. Believing in God is in a way is the most natural, perhaps even the most primitive notion that people have. 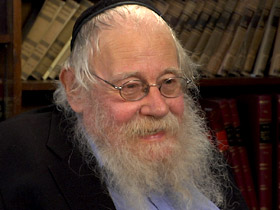 ABERNETHY: But belief, said Steinsaltz, is just the beginning.

RABBI STEINSALTZ: What is really difficult is not so much the belief but the relationship. I’m still striving to become better, to become faithful for serving Him, to become a human being as He possibly wants me to be.

RABBI STEINSALTZ: The Lord says I made the world. It’s pretty good, but there are all kinds of holes in it. You people go, and you make the amendments—bigger ones, smaller ones. But you, that’s your duty.

ABERNETHY: The rabbi says even the smallest good deed can have a global result, the so-called butterfly effect.

RABBI STEINSALTZ: The movement of the wings of a butterfly can change the world, and the point is basically we live in one world. Any movement in this world somehow affects everything else. So when we do anything better, we change the world. 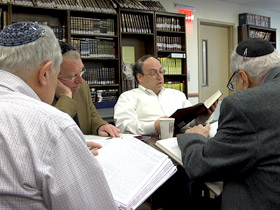 ABERNETHY: If Jews study the Torah, if they honor the Sabbath and the other holy days, if they do good deeds and partner with God, Steinsaltz says they will achieve holiness. He also says everyone possesses a divine spark.

ABERNETHY: Steinsaltz said he saw no signs of any early peace in the Middle East, but he insisted that he had not despaired.

RABBI STEINSALTZ: I am an optimist, meaning that I see things as black as they are, but I still hope.

ABERNETHY: Talking with the rabbi, it was clear that his optimism rests on his absolute trust in God.

RABBI STEINSALTZ: When you believe that, you see, everything comes from the Lord.so whenever something happens if it’s a glad thing, I’m saying thank you for making me happy or healthy or satisfied. If something untoward happens to me, I’s saying the same thing. Please, thank you for letting me know that you exist.

God exists everywhere in every way in every form. We have so many prayers in our religion, so many prayers, but sometimes the prayer is just like I pick up the phone and say hello, I’m glad that you are there.

Next month the first four volumes of the Steinsaltz Talmud in English are due to come out.

Read an excerpt from the introductory “A Message from Rabbi Adin Even-Israel Steinsaltz” to the Koren Talmud Bavli. Posted with permission from Koren Publishers Jerusalem: 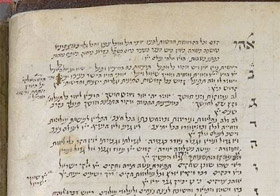 The Talmud is the cornerstone of Jewish culture. True, our culture originated in the Bible and has branched out in directions besides the Talmud, yet the latter’s influence on Jewish culture is fundamental. Perhaps because it was composed not by a single individual, but rather by hundreds and thousands of Sages in batei midrash in an ongoing, millennium-long process, the Talmud expresses not only the deepest themes and values of the Jewish people, but also of the Jewish spirit. As the basic study text for young and old, laymen and learned, the Talmud may be said to embody the historical trajectory of the Jewish soul. It is, therefore, best studied interactively, its subject matter coming together with the student’s questions, perplexities, and innovations to form a single intricate weave. In the entire scope of Jewish culture, there is not one area that does not draw from or converse with the Talmud. The study of Talmud is thus the gate through which a Jew enters his life’s path. The Koren Talmud Bavli seeks to render the Talmud accessible to the millions of Jews whose mother tongue is English, allowing them to study it, approach it, and perhaps even become one with it.