BOB ABERNETHY, host: Religious groups held rallies and a 48-hour prayer vigil in front the Supreme Court this week as the justices heard oral arguments over Arizona’s controversial immigration law. At issue in the case is whether the state law infringes on the federal government’s authority to establish and enforce immigration policy. But several faith groups argue the law violates the dignity of immigrants and could result in racial profiling.

For more on this I am joined by Kim Lawton, managing editor of this program, and Patricia Zapor, a staff writer with Catholic News Service who’s been covering the faith community and immigration. Pat, it’s nice to have you back here again.

ABERNETHY: The Catholic bishops and many other religious leaders want a whole new kind of approach to immigration. What specifically, what exactly do they want? 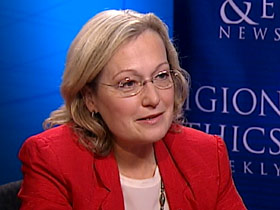 ZAPOR: Well, that could take the whole program to explain. They want a comprehensive approach, something that gives people who are already here illegally the chance to legalize their status so that they can pull their families together, reunite torn-apart families, work legally, be able to go home to their home countries and visit their families there. They want a path for jobs. There’s a whole assortment of things.

ABERNETHY: Any likelihood that they might get those things any time soon?

ZAPOR: I think that’s probably very unlikely in an election year, although it might make for some good political demanding during this season.

KIM LAWTON (Managing Editor, Religion & Ethics Newsweekly): One of the arguments this particular week, as the case was at the court, from the religious community was that some of the local laws could hinder their ministry. What were they talking about?

ZAPOR: Well, this came up most conspicuously in 2006 in a version of legislation that passed the House included a provision that would make it illegal for anybody to help people who are in the country illegally. Cardinal Mahony of Los Angeles, then the archbishop, at that time told his priests that if this bill passes I am not going to expect you to follow through with that, to follow that law. It’s seen as an imposition on the rights of people of faith to take care of others. 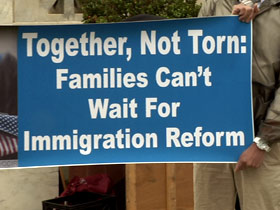 ABERNETHY: People talk about the rights of other people, too, and what do the religious leaders say to those who say look, we’ve got laws, and laws need to be enforced and obeyed?

ZAPOR: Well, I think the religious leaders agree that states, government have a right to enforce their borders, but their arguments against the current immigration situation relate to the civil rights era, when Dr. Martin Luther King and bishops and priests and rabbis were at the forefront of arguments that the laws requiring segregation were inhumane, and they were unjust laws, that they had a right and an obligation to fight against those laws.

LAWTON: What are some of the theological and moral arguments that these religious leaders, really across a pretty broad spectrum, are making on this?

ZAPOR: Well, and they go back to the Old Testament and into the New Testament to calls to take care of the stranger, to take care of those people who have no rights in a society. They are throughout scriptures. That’s one of the main things that they go to.

ABERNETHY: There was some new data that came out this past week about the number of immigrants from Mexico going down for the first time in a long time. Does that change things at all?

ZAPOR: Not really, because there are a lot of people who are in the country illegally, to begin with, and that hasn’t particularly—doesn’t reflect a slowing of migration from Central America, from South America. Just because the situation in Mexico is changing doesn’t really change the whole picture all that much.

ZAPOR: In Mexico, yes. Mexico’s economy has improved, there’s a lower birthrate, an assortment of factors involved in that.

ABERNETHY: Pat Zapor of Catholic News Service, many thanks.