TIM O’BRIEN, correspondent: The Alabama case before the Supreme Court stems from the brutal killing of 52-year-old Cole Cannon, whose body was found in the charred ruins of his mobile home nine years ago. Authorities first thought it to be an accident, but bruises on Cannon’s body and his broken ribs prompted them to investigate further. It turned out to be a murder committed by a neighbor, Evan Miller, who was only 14 years old, and his 16-year-old friend, Colby Smith. It was in the early morning hours; the three had been drinking heavily. When Cannon appeared too drunk to resist, the teenagers tried to rob him, but a fight broke out.

Children are capable of committing horrible crimes, even 14-year-olds like Evan Miller, who beat his victim over the head with this baseball bat and then crushed his ribs with it. He then placed a sheet over his head and told him, ‘I am God. I have come to take your life.’ A fourteen-year-old.

Candy Cheatham is the victim’s daughter.

CANDY CHEATHAM: Even with that, he did not stop beating him, and they set the trailer on fire—there were at least three or four points of origin—and left my Dad there to die. The cause of death was blunt force trauma to the head, and he had about seven or eight broken ribs in combination with the smoke inhalation. Then they proceeded to brag to friends about what they did. 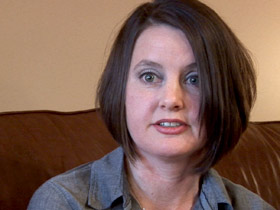 O’BRIEN: Murder in the course of another felony—in this case arson– is a capital offense in Alabama, as it is in most states. The Supreme Court threw out the death penalty for juvenile offenders in 2005, so when the jury returned its guilty verdict, the judge could only sentence Miller to life without parole. The Supreme Court won’t allow more, and Alabama law doesn’t allow anything less for one convicted of capital murder. Prosecutors say Miller got what he deserved.

ROBERT LANG (Prosecutor, Lawrence County, MO): Our legislature and the people of our state believe that if you commit these type of crimes, there are only two punishments that are fitting, and that is either the death penalty or life in prison without parole. So his protection is he’s not going to get the death penalty, but he’s going to be put away for the rest of his life.

O’BRIEN: The Supreme Court is now expected to use the Miller case to determine whether states are required to consider giving juveniles a second chance, no matter what they did. And each side is giving up a little in this case. Alabama is not arguing that all juvenile murderers should be ineligible for parole, only those who commit the worst crimes—crimes that would bring a death sentence if the defendant were an adult.

Evan Miller is represented by the Equal Justice Initiative and its founder and executive director, Bryan Stevenson, and Stevenson isn’t asking anyone actually be given parole, only that when offenders are so young that at some point far down the road, they at least be allowed to demonstrate they are entitled to be set free. 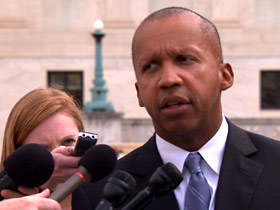 BRYAN STEVENSON (Equal Justice Initiative): I think everyone is more than the worst thing they’ve ever done, and I think that policy makers can make decisions about how to punish them. But I think children are uniquely more than their worst act; they have quintessential qualities and characteristics that a decent society, a maturing society, an evolved society, we believe, is constitutionally obligated to recognize and protect.

O’BRIEN: An argument Stevenson pressed in court to a skeptical Justice Antonin Scalia.

STEVENSON: I think the easier rule to write would be that there is a categorical ban on all life without parole sentences for all children up until the age of 18.

JUSTICE ANTONIN SCALIA: How do I come to that decision? What, do I just consult my own preferences on this matter? Something like 39 states allow it. I mean, the American people, you know, have decided that’s the rule. They allow it, and the federal government allows it. So I’m supposed to impose my judgment on what seems to be a consensus of the American people?

O’BRIEN: John Neiman, Alabama’s solicitor general, says life without parole is a reasonable alternative to the death penalty, even for juveniles. 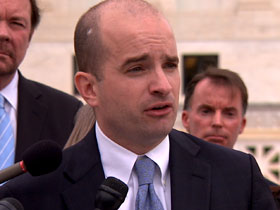 JOHN NEIMAN (Solicitor General, Alabama): The theory and the thought is that if someone doesn’t deserve the death penalty for that particular crime they deserve life without parole. That’s the appropriate way to express society’s outrage at these sorts of aggravated murders.

It is reasonable for legislatures to conclude that they’re going to draw a line in the sand with respect to aggravated murder, such that as a floor in terms of the appropriate punishment the defendant is going to get, at the very least, life without parole, a punishment that’s no doubt severe, but one that is less severe than the impact the crime has had on society.

O’BRIEN: But Attorney Bryan Stevenson reminded the justices that they have acknowledged in their past decisions that because children do not think like adults, they are less culpable.

O’BRIEN: At one point, the state’s demand for retribution appeared to give way to a justice’s concern for a child. 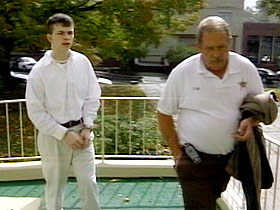 KENT HOLT (Assistant Attorney General, Arkansas): The principle justification in this case lies with the retributive principle. The punishment for this crime reinforces the sanctity of human life, and it expresses the state’s moral outrage that something like this could happen.

JUSTICE RUTH BADER GINSBURG: You say the sanctity of human life, but you’re dealing with a 14-year-old being sentenced to life in prison, so he will die in prison without any hope. I mean, essentially you’re making a 14-year-old a throw-away person.

CANDY CHEATHAM: Society needs to be protected, and it’s not throwing away a juvenile. If he wants to be rehabilitated, that can happen behind bars. It’s just too high of a cost to risk.

O’BRIEN: Candy Cheatham remembers her father as a “good man” and says how he died will haunt her for as long as she lives.

STEVENSON: If we win, the United States will still have the harshest punishment scheme for children in the world. We will still have very severe punishments in place to punish any offender who commits an aggravated crime.

O’BRIEN: The court was sharply divided in 2005 when it found the death penalty unconstitutional for juvenile offenders. Whether juveniles may also be spared life in prison with no parole when they commit murder isn’t any easier. Although some justices were sympathetic, others are known to feel that these decisions are best left to juries and state legislatures, not federal judges. The court’s opinions, and there will surely be several, are due in the next month.