BOB ABERRNETHY, host: In a coordinated effort, 43 Catholic institutions filed federal lawsuits to stop the Obama administration’s plan to require free coverage of contraceptive services. Among the plaintiffs were Catholic dioceses, hospitals, social service agencies, and universities, including Notre Dame. They say the requirement would infringe on their religious freedom. Supporters of the coverage plan say a proposed compromise would avoid religious liberty concerns, but the Catholic bishops reject that compromise. Meanwhile, a new Gallup Poll found that 82 percent of US Catholics believe birth control is morally acceptable. Fifteen percent said it was morally wrong.

Joining me now are Kim Lawton, managing editor of this program, and Kevin Eckstrom, editor-in-chief of Religion News Service. Kevin, Kim, welcome. Kevin, what do you make of this? 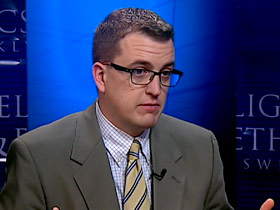 KEVIN ECKSTROM: Well, the Catholic institutions that filed suit are basically fighting over whether or not they have to provide birth control coverage to their employees in their insurance plans. That’s what the root of this is all about. The fact that they, 43 groups, came together and filed a dozen lawsuits shows that they are trying to come at this with the full weight of the church, to show that this is not just an isolated diocese or a small group, but that the whole range of the church is really upset about this. And it also signals, I think, that they don’t see any other alternative, that they don’t see a political compromise in the works with the White House. They, I think, in a lot of ways, feel like they have no other choice but to go to court.

KIM LAWTON: And they feel that the compromise that the White House has offered which some more progressive, liberal, moderate Catholics say that’s okay— these groups are saying no, it’s not okay. It doesn’t cover us, and for them it’s a matter of religious freedom, and they very clearly said, this is not about contraception, really. It’s about religious freedom and our ability to practice our beliefs and the government not telling us what to do, what we have to do, and the government not also saying who is a religious group that qualifies for an exemption from the policy.

ABERNETHY: And how representative do you think these groups are?

ECKSTROM: Well, they’re representative in that it’s a broad range. I mean, it’s schools, it’s groups, it’s dioceses, it’s big dioceses and small ones. But it’s only a handful of dioceses, I think, you know, less than 12 dioceses out of 200 or so in the country, so the vast majority of local dioceses did not join this suit.

ABERNETHY: But that doesn’t mean that they like, what’s going on.

ECKSTROM: Right. And a lot of them support what the bishops as a whole are trying to do, but there is some dissension in the ranks about what the best legal strategy is, and a lot of people, a lot of bishops, or some bishops think that this was a bit premature.

ABERNETHY: The fury of the opposition and the breadth of it suggest that the administration might have miscalculated when they presented this in the first place. Do you see that? 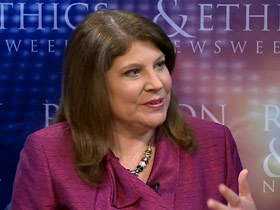 LAWTON: Well, the first policy, the first iteration of this policy got very widespread disapproval from a lot of Catholics, and we’ve heard that inside the administration there were people saying, warning the administration that this would not be popular. Now, more people, more Catholics have approved this, the compromise that the Obama administration tried to work out, but there are some suggestions that maybe they weren’t prepared for this and that the religious outreach wasn’t what it should have been in order to figure out how to maneuver this.

ECKSTROM: Yeah, and a lot of Catholic bishops said that they were basically blindsided by this. They were never consulted beforehand and say hey, this is what we’re planning to do, what do you think? Can we find something that works? Instead, they were just handed this and said take it or leave it, and the bishops basically have said no, we’re not going to take it.

ABERNETHY: Right in the middle of an election year.

ECKSTROM: Right. And there is some concern both within the bishops’ conference but also without that the bishops risk appearing to be anti-Obama or perhaps too Republican and that the timing on this needs to be very, very sensitive.