KIM LAWTON: Graduation day at Union Theological Seminary in New York. This multi-denominational Christian institution describes itself as “progressive and evangelistic,” and its stated vision is that graduates will change the world by practicing their theological vocations. That vision explicitly includes women, such as Itang Young. Young grew up in Houston. She says she never saw herself becoming a pastor or religious leader.

LAWTON: Young became an engineer and took on a high-powered corporate job. Then, she started questioning the purpose of her life.

YOUNG: I needed to do something to help improve the lives of the people around me. 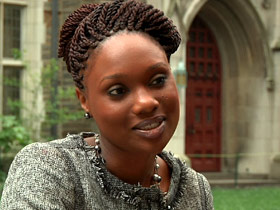 LAWTON: She concluded that seminary would help her get there, and at Union, she found a place especially open to female students.

PRESIDENT SERENE JONES: I think right now at this moment in history we’re in the midst of something of the magnitude of the Protestant reformation.

LAWTON: Serene Jones is Union’s first female president. She believes the rate at which women are entering theology and ministry is one of the biggest changes in 2,000 years of Christianity.

JONES: There are communities in this country in which if a woman says she wants to be a minister, she’s not going to be looked at like she’s stark raving mad. To have a situation in which we recognize the fullness of life of women, the full equality of women changes everything.

LAWTON: Women with seminary degrees are becoming ordained pastors. But they are also becoming chaplains, social workers, counselors, authors, scholars and professors. Despite the new opportunities, limitations do remain, even in denominations that support female leadership. 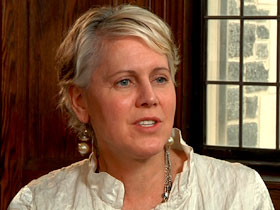 JONES: The number of women from Union and the number of women in this country who are the senior leaders of large congregations is so miniscule, and it still is sort of the, what they refer to as the stained glass ceiling. You can only go so far.

LAWTON: Jones says the challenges can be subtle.

JONES: There are obstacles I think in the church, of people who don’t even know they have a prejudice against women. But they’ll say things like, “You know, she just, I just, I can’t hear her voice in the back of the sanctuary. I want a minister who can talk loud.” Or “You know, she just looks a little too awkward in the pulpit.”

LAWTON: Then, there are more overt limitations. The Roman Catholic Church and certain evangelical denominations oppose female ordination.

PROFESSOR JANET WALTON: I am a Roman Catholic woman. I have no place at this table. This table is for men.

LAWTON: Janet Walton is a Roman Catholic nun who has been professor of worship at Union since 1981. She’s one of several Catholic women on the faculty here. 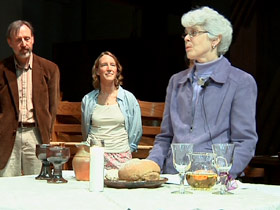 PROF. WALTON: It’s very difficult for me to imagine that millions of Catholics never experience a woman leading the liturgy. Because I think it matters. It’s not essentially that I think it makes a difference whether a woman or a man does it, but that no women can do it is a very big problem in the Catholic Church.

LAWTON: Part of how it matters, she argues, is in portraying a fuller vision of faith.

PROF. WALTON: There are lots of ways in which the, being a woman and having the experiences that go with being a woman do affect the way one understands God.

BARBARA RICE: It’s not just about having the same place as men in ministry. I mean, certainly we need all those same rights and need access to as many of those positions, absolutely, and equal pay, for sure, but it’s also about bringing all of our uniqueness as women into those positions. We have gifts. We have gifts that are uniquely women gifts and that those don’t get checked at the door

RICE: What is sacred?

LAWTON: Barbara Rice is a second-year masters of divinity student who says she has wanted to be in ministry her entire life. She grew up in a conservative evangelical church in North Carolina, and as a woman and a lesbian, she felt her opportunities for ministry were restricted. But she believes women have much to contribute. 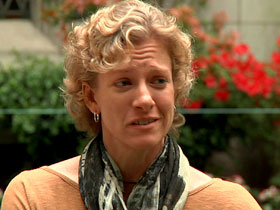 RICE: We have an ability to listen to our intuition. And I think, as far as spiritual matters go, that that’s incredibly important. Whether that’s the way we’re socialized or whatever it is I think that we tend to have a sense of things, that if we can learn to trust it, especially with the discernment of a community, it can be a really spiritually enlivening thing.

LAWTON: Jones believes women bring to theology what she calls a sense of spirituality wedded to the ordinary.

JONES: It’s about breaking bread and putting on Band-Aids on a skinned knee, and about being angry and standing up for justice in a community. Those aren’t things that men don’t do, because they do. It’s just that women somehow bear that in their souls with a depth and a persistence that brings freshness to ministry.

CHARLENE SINCLAIR: The journey for women has been a journey that’s been so difficult so that when they finally are able to step on this path, there’s a level of just like deep joy and gratitude.

LAWTON: For Charlene Sinclair, a 4th year PhD student, seminary has been a way to enhance her work as a community organizer.

SINCLAIR: Seminary actually not only gave me permission to engage my head in this process, but showed me that engaging my head was critical so that I wouldn’t be a reactionary pastor or a reactionary spiritual person, but I can do it out of a place of, not just deep love, but deep, thoughtful love. 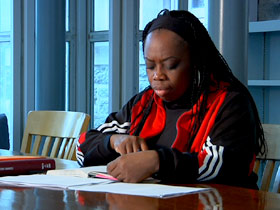 LAWTON: Jones found her own passion for theology early on.

JONES: Studying theology, reading Augustine and Calvin and learning about scripture and reading about women’s leadership, it was like eating chocolate all day long. It was so delicious. And that’s when I, when I stumbled into that world I realized I’d found my home.

LAWTON: She grew up in the Disciples of Christ denomination and says her family encouraged her to pursue that passion.

JONES: The struggle along the way was, it’s one thing to imagine yourself doing something and it’s another thing in the broader world to have this, the confidence and the strength to believe you actually can do it.

LAWTON: Jones says it’s important for women to have role models and people to encourage them. She mentors younger women. And, she says, men can also play an important role.

JONES: As women go into the ministry it’s often going to be men that are their biggest supporters. It’s not just women that are out there cheering and you know, giving sustenance.

LAWTON: Itang Young says her time at seminary vastly expanded her vision of how God may use her in ministry. She says it’s actually not all that different from her work as an engineer.

YOUNG: As an engineer, we build things better. We deconstruct and reconstruct items, objects, in a way that helps to improve the lives of other people. And within a ministerial context, the function is the same. We’re doing church in a new way. We are building God’s people. So I went from building things to helping build God’s people.

LAWTON: For now, Young is still deciding whether or not she’ll pursue ordination. She’s not at all worried that as a woman, her ministry options may be limited.

YOUNG: There’s one thing that I learned here at Union that is to create opportunities where none exist. So if there’s not a position available, market yourself and perhaps one could open. The word of God says that your gifts will make room for you, and I believe that.

LAWTON: Jones says that’s the vision she has for all her students.

JONES: If you can come to believe that God wants you to succeed and flourish and lead, that’s unstoppable.