KIM LAWTON, Managing Editor, Religion & Ethics NewsWeekly: After a two-year-long investigation, the Vatican strongly condemned a 2006 book on sexuality written by a prominent American nun. The Vatican’s doctrine office said Just Love by Sister Margaret Farley reflects a “defective understanding” of church teaching on issues including masturbation, homosexuality, marriage and divorce. Sister Farley taught Christian ethics at Yale Divinity School for more than 30 years. She said her book was not intended to be an expression of official Catholic teaching, but rather an “exploration of contemporary interpretations.” With this week’s news, the book has shot up the bestsellers charts. Many lay Catholics around the country have been rallying in support of US nuns. Last week, the umbrella group representing the majority of American Catholic sisters pushed back against a Vatican rebuke of them. In April, the Vatican accused the Leadership Conference of Women Religious (LCWR) of having “serious doctrinal problems” and ordered the group to place itself under the authority of Seattle’s archbishop. Conference leaders will go to Rome Tuesday (June 12) for a meeting with church officials to discuss the situation.

Meanwhile at the Vatican, the investigation continues in the so-called “VatiLeaks” scandal in which private papal documents have been leaked to journalists. The pope’s butler, Paolo Gabriele, was formally questioned this week. Under Vatican law, he faces up to six years in prison on charges of aggravated theft of the documents. But after Gabriele’s arrest, more documents were leaked, along with an anonymous note threatening still more unless certain church officials resign, including Cardinal Tarcisio Bertone, the Vatican secretary of state. Bertone, who has been targeted in many of the leaks, accompanied Pope Benedict XVI to Milan last weekend for a huge event—the World Meeting of Families. An estimated one million people attended a special Mass there. Benedict announced the next World Meeting of Families will be in Philadelphia, in 2015. He said he looks forward to taking part “God willing.” He’ll then be 88 years old.

Amid all of this, the US Catholic bishops will be holding their semi-annual meeting this coming week in Atlanta. Joining me now are Kevin Eckstrom, editor in chief of Religion News Service, and Patricia Zapor, staff writer of Catholic News Service. Welcome to both of you. On their public agenda, the bishops right now don’t have a discussion scheduled about the situation with the nuns, but a lot of people say they’ve got to be talking about it behind closed doors. How big of an issue is this for them and for the church? Kevin. 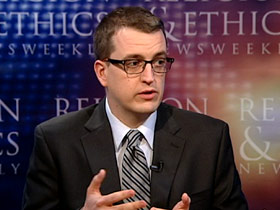 KEVIN ECKSTROM, Editor in Chief, Religion News Service: I think it is a big issue for them, because the bishops and the hierarchy have really had a public relations headache on this. This has not played out the way that they thought. People are rallying around the nuns. They’re coming to their defense. But I think, really, what you are seeing is a bit, not quite a civil war but kind of a civil skirmish within the US church about what it means to be Catholic. The hierarchy says, you know, you can’t stray the line on orthodoxy or theology, and we need you to be talking about homosexuality and abortion and gay marriage. And the nuns say, well, actually we want to talk about social justice, and we want to talk about the poor, and we want to talk about what else it means to be Catholic. And so it’s a fight over when you’re a Catholic in the public sphere what do you talk about, what do you emphasize?

PATRICIA ZAPOR, Staff Writer, Catholic News Service: And the sisters have long maintained that it’s not that they don’t follow the church teaching on issues like abortion and same-sex marriage and so on, but that they see their charism is to take care of the poor, to take care of the people who are marginalized in society. You know, they don’t see focusing on one as diminishing the other in terms of issues that are important.

ECKSTROM: It’s not a zero sum gain for the nuns.

LAWTON: What happens if, in this meeting that they’re having this coming week in Rome, they decide that they just can’t go along with what the Vatican is directing? What happens then? 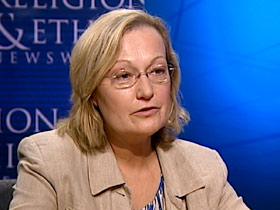 ZAPOR: Well, it’s quite possible, and some have discussed this, that the sisters could form a separate organization that does not come under the canonical auspices that the LCWR does. That’s one of the possibilities on the table.

LAWTON: Another thing that is on the bishops’ schedule is talking about religious freedom. They’re launching a campaign called “The Fortnight of Freedom” in the next couple of weeks. They’ve been talking about this. What are they doing, Kevin?

ECKSTROM: Well, they’re launching this fourteen-day period that ends on Independence Day, very deliberately, to talk about religious freedom. But they’re not just talking about the contraception mandate, which is the big thing that’s gotten all of the attention, but they’re also talking about the ability to hire and fire people who share their faith—that that’s a big deal. Or the ability of Catholic business owners to be able to set their own policies on things like offering birth control to their employees. It’s not just about the public sphere, but it’s about the private sphere, too. So the contraception is the one that’s gotten all of the attention, but they have a—it’s sort of a multifaceted agenda that they’re looking at.

ZAPOR: Well, they would like enthusiastic response from parishioners to write letters to members of Congress, to do whatever they—is within their power to let Congress and let the administration know how they feel. The response varies around the country. Some parishes are wholeheartedly jumping behind it. Some are doing less, some might in some places be just letting it go and letting people decide to do things on their own. It varies a lot from one place to another. 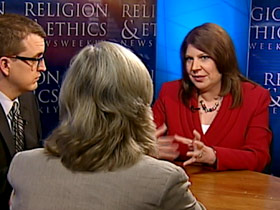 LAWTON: And, of course, a major thing on the schedule is, it’s hard to believe it’s the tenth anniversary of the bishops’ development of their charter. They call it their guidelines to prevent clergy sex abuse to protect children. What are they discussing now, ten years later?

ECKSTROM: Well, they’re basically looking back to see how effective it’s been. You know, have they been able to clean up the mess that erupted ten years ago. And to a large degree they have. But the continuing issue that they have, and again, it’s sort of a public relations problem, is that they are seen as going after nuns and Girl Scouts and rogue theologians, but there’s still no real mechanism to hold bishops accountable. The men themselves who allow the problem to get out of hand—you can’t sanction a bishop, you can’t fire a bishop. Only the pope can do that, and there’s no mechanism, and so a lot of people say, you’ve done great work over the past ten years, thank you for that, but you still need to hold yourselves accountable.

ZAPOR: And on the scale of the way things work in the church, ten years is actually a pretty short amount of time, and I don’t think there’s much dispute that they’ve made huge progress in putting structures into place in parishes and dioceses to deal with any possible accusation that comes up and to deal with perpetrators as they appear and also to help victims. Ten years is a short amount of time, as difficult as that might be to believe in this world.

LAWTON: And, in fact, I’ve heard some people say, believe it or not, you know, the Catholic church may be one of the safest institutions for children because of all of that—people are looking at overseas it’s being used as a model—but yet not necessarily followed. Are they looking to change or tinker with this policy at this meeting?

ECKSTROM: They have not made any major changes, at least in the last couple years, and there’s been no real push for changes from within the conference, but I think you’re right. We saw in the Penn State scandal that, you know, this is not just a Catholic problem and that Penn State and schools and other industries can learn a lot from what the church has learned over these past ten years, and that’s really what the bishops started with.

LAWTON: Well, alright. Thank you both for joining us.