BOB ABERNETHY, host: During President Obama's meeting with the pope, he also invited Francis to visit the U.S. We want to explore their meeting with Father Tom Reese, an authority on the Vatican and senior analyst for National Catholic Reporter. Tom, welcome. Welcome back here. Sum up the meeting between the president and the pope, would you?

FATHER TOM REESE, SJ (Senior Analyst, National Catholic Reporter): Sure. The principal focus of the meeting was talking about issues of peace, international issues, and also talking about how to help poor people, how to help the marginalized all over the world. This is an area where the pope and President Obama are on the same page. At the same time the Vatican always likes to support the local bishops when they're in conflict with their governments, and so the issues that the bishops of the United States are concerned of were also brought up.

ABERNETHY: Yeah, and this question of the U.S. bishops and their relationship with the U.S. president: There is very great difference there, isn't there? Especially on matters of contraception, things like that. 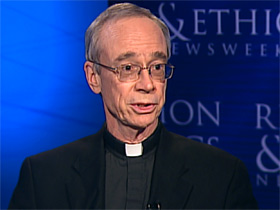 REESE: There are, but that wasn't the principal focus of the meeting. In fact, it doesn't seem that the pope and the president talked about that at all. It was really talked about by the Secretary of State for the Vatican.

ABERNETHY: Right after the conversation between the pope and the president, Obama had a news conference, and he said in there something I thought was remarkable. He used some language that we don't often hear, and I want to play a little bit of that and get your comment on it:

PRESIDENT BARACK OBAMA (speaking at news conference): “A belief that in politics and in life the quality of empathy, the ability to stand in somebody else’s shoes and to care for someone even if they don’t look like you or talk like you or share your philosophy—that’s critical.”

ABERNETHY: That's language we don't hear all the time from politicians, right?

REESE: Absolutely not. I think it shows the impact that Pope Francis had on the president. That language that the president uses is very much like the language that the pope uses in his apostolic exhortation Evangelii Gaudium, “The Joy of the Gospel,” where he talks about our need to look at one another as brothers and sisters; not the members of tribes or nations or political parties or religions, but to treat all of God's children as our brothers and sisters. 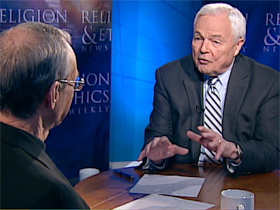 ABERNETHY: When the pope speaks about taking care of the poor in the world, what are the implications for capitalism?

REESE: Well, he has been very critical of the capitalistic system. It's not that he has some grand economic plan. He acts like an Old Testament prophet and comes in and says, “This is wrong. The poor are still with us. They're suffering. The system is not working for them. Do something about it.” And I think that's what he's telling politicians and business people.

ABERNETHY: And back to the meeting between the president and the pope: So what? What's accomplished?

REESE: Well, I think there's short-term and long-term consequences. The pope is going to the Middle East, and he wants to be a voice to help for reconciliation, to help the peace process, and that's extremely important. He also wants to change attitudes of people all over the world so we treat one another as brothers and sisters, and then we can live in harmony and take care of our poor brothers and sisters.

ABERNETHY: Tom Reese of National Catholic Reporter, many thanks to you.

REESE: Good being with you.

President Obama met Pope Francis for the first time this week (March 27) at the Vatican. They exchanged greetings and gifts before moving into a private conversation. “The principal focus of the meeting was talking about issues of peace, international issues, and also talking about how to help poor people, how to help the marginalized all over the world,” says Father Tom Reese, an authority on the Vatican and senior analyst for National Catholic Reporter. “This is an area where the pope and President Obama are on the same page.”