BOB ABERNETHY, host: At the Vatican this Sunday (October 5), Pope Francis is opening an unusual synod, a two-week gathering of Catholic bishops from around the world to discuss the church and families. Among the possible topics are marriage, divorce, cohabitation, annulments, and artificial birth control. Even before the synod began, there was a rare public argument among some top church officials. We want to talk about this. Kim Lawton, managing editor of this program, and Kevin Eckstrom, editor-in-chief of Religion News Service. Kevin, welcome. What was the argument about?

KEVIN EKSTROM (Editor-in Chief, Religion News Service): The argument is basically between the two sides of the church: the traditionalists, the conservatives who want to keep the church teaching as it is, and the more progressive side, which frankly is represented by Pope Francis, who are open to change. They haven't said yet what change they want to make or if they'll even make it, but they're open to it, and they're open to the idea. And so you have this really rare public disagreement between cardinals, saying the church can change, and the church should change. And the other side saying no, the church can never change.

ABERNETHY: But what was the argument about? 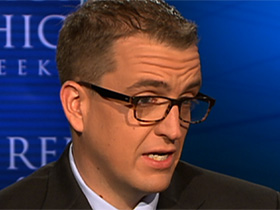 ECKSTROM: Well, the argument is really about, most immediately about communion for divorced Catholics. So under church law right now, if you are divorced and get remarried outside of the church, you can't get communion. And so what they're arguing about is whether or not they should change that rule and allow those divorced Catholics access to communion.

ABERNETHY: Now there's no voting, no decision-making, no change in this synod. But next year there's going to be another synod next October about the family again, and then, Kim—

KIM LAWTON, managing editor: Well, then there could be some change. I mean, nothing's ever guaranteed, especially when you're talking about the Catholic Church, but this is supposed to be the time for just discussing and debating some of these issues. And then decisions would come later, down the road. And on this issue of divorce and remarriage, you know, the church doctrine is that sacramental marriage is forever. It cannot be dissolved. And so therefore they don't recognize divorce, and therefore if you are divorced and you get remarried, in the church's eyes you're living in adultery, and that's why you cannot take communion and other sacraments. And so what the cardinals are arguing about is does it affect the doctrine that marriage is not able to be dissolved if you change how you treat people who are in those situations? And I think some of the conservatives are worried if you start tinkering around with that, what other issues and areas of teaching can be tinkered around with?

LAWTON: Right. I mean at this meeting that's the issue that the media and a lot of outside people are really looking at.

ABERNETHY: Yeah, but that may be the easiest one for them to deal with. 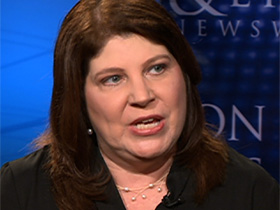 LAWTON: It's certainly the one that has the most momentum right now for change. But this conference is also—this summit is talking about things like how migration affects the family and, you know, how modern family life and poverty and, you know, all of those things put strains on marriage, and how the church can minister to people, minister to families on a whole range of issues, and so all of that. And there may be some really interesting changes in some of those areas that people aren't focusing on right now. ECKSTROM: Right. And it really is a larger issue of whether the church can change at all. There's a difference between doctrine and discipline, and so the church is not going to come out and suddenly say that, oh yeah, anybody can marry anybody, and it's fine. Or that gays and lesbians can get married. You know, that's not going to happen. What they're talking about is the discipline, so how does the church react when these people present themselves to the church? So when a divorced couple comes to the church, how does the church respond? When a gay and lesbian couple comes, or when an unmarried couple with kids shows up at church, what should the church response be? And that's really kind of what they're talking about. And the larger question is can they change at all? Is the church teaching—

ABERNETHY: And where is Francis in this?

ECKSTROM: I would put Francis slightly left of center. Now that's in relation to the wider church.

ECKSTROM: He's no raging liberal, but he's not an arch-conservative either, and he has voiced openness to at least talking about change, which that in and of itself is kind of a significant move.

LAWTON: And a lot of people are sort of spinning this meeting as an interesting test case for the impact Francis may have on the church: his personality, his style, his tone. That, you know, that's all out there, but what kind of an impact will that have in the real life of the church? And so some people are pitting this as conservatives versus liberals, but people are watching to see what Francis's legacy will be.

Host Bob Abernethy, managing editor Kim Lawton, and Religion News Service editor-in-chief Kevin Eckstrom set the stage for the Vatican’s two-week gathering of Catholic bishops that begins October 5 to discuss the church and contemporary family life. Among the topics for debate at the synod: marriage, divorce, remarriage, annulments, and cohabitation.