But one year ago, members of St. Luke’s parish were devout, devoted Episcopalians. This is the first Episcopal church in the country to convert to Catholicism under Vatican rules designed to attract disaffected Episcopalians.

If 20 years ago I had said you’re destined to be a Catholic priest, how would you have answered?

FATHER MARK LEWIS: I would have thought you were crazy.

FAW: Under a 2009 decree by Pope Benedict XVI, St. Luke’s, like all Episcopal churches that choose to convert, gets to retain much of its liturgy and traditions, like using its Book of Common Prayer and Anglican hymns.

It also gets to keep its married priest, Father Mark Lewis, who is exempt from the Roman Catholic vows of celibacy. Father Lewis, an Episcopal priest for 10 years, and his wife, Vickey, have two children. Their grandson, Sherman, is an altar server. 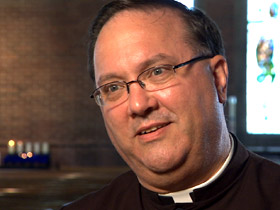 FAW: Former Episcopal priest, Father Scott Hurd, married with three children, also found the move to Catholicism seamless. He was ordained into the Catholic Church in 2000 and acted as the chaplain here while Father Lewis waited to be ordained.

FATHER SCOTT HURD (US Ordinariate): There is a real hunger amongst some Episcopalians and Anglicans for authority. It was the question of where can true Christian authority be found that was a key element in this community’s journey.

FAW: It wasn’t just the need for authority, say other former Episcopalians. They were also uncomfortable because the Episcopal Church approves of ordaining women, openly gay priests, and same-sex marriage.

STEPHEN SMITH (Congregant): There’s not any one real incident you can point to, but it’s like the strands of a rope giving one by one, and each one weakens the rope as a whole. 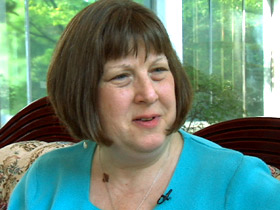 FAW: Anne Marie Whittaker feels that she didn’t leave the Episcopal Church but that the church left her.

ANNE MARIE WHITTAKER (Congregant): All of a sudden it was do-your-own-thing mass, and there was a lot going on, for instance, a clown mass. I would come in and someone put a red nose on me! I saw children circling altars. One by one, parishes started to succumb to some of these practices in order to attract people, and it made it difficult for me to worship in that atmosphere.

FAW: Under the new Vatican guidelines, an estimated 1300 Anglicans and 150 married priests have inquired about being received into the Catholic Church. To accommodate them, the Church has established a new ordinariate, the equivalent of a nationwide diocese. Father Hurd acts as its chief of staff.

HURD: I don’t see it as being a tidal wave, but I see it as a slow and steady trickle of people who wish to—who feel led to come in this direction. 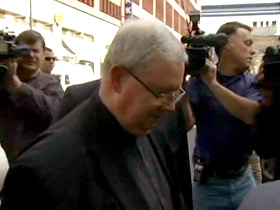 FAW: And who feel led despite revelations of widespread priestly pedophilia and cover-up within the Catholic Church .

FAW: But it’s bigger than the Church?

WHITTAKER: It’s bigger than the Church.

FAW: Some Episcopal Church leaders, such as Bishop Eugene Sutton of the Episcopal Diocese of Maryland, argue that these conversions are not a threat and that many Catholics become Episcopalian. 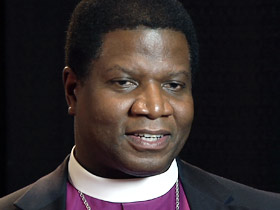 BISHOP EUGENE SUTTON (Episcopal Diocese of Maryland): I like to say that we are really one spiritual family. We believe about 90 percent of things in common. Where we disagree is on matters of authority and some other spiritual matters. But the important thing is that we are not fighting; we are not in competition with one another.

FAW: Even though the number of Episcopal congregations converting to Catholicism is relatively small, the impact on the Episcopal Church has not been negligible. Indeed, here at Virginia Theological Seminary, the country’s largest Episcopal seminary, the president and dean calls the movement “a real threat.”

REVEREND IAN MARKHAM (Dean of Virginia Theological Seminary): There’s quite a lot of traffic currently going both ways between the two traditions, especially at the level of congregants. What’s interesting here is you’ve got entire congregations and clergy making the shift. So, yeah, I think the Roman Catholic Church is a threat, because we’ve lost the sense of our theological understanding and identity.

MARKHAM: There was a perception that this was poaching by the Roman Catholic Church of Anglicans around the world. It was discourteous, it was stealing sheep, it was unecumenical.

FAW: It is seen as a kind of poaching? 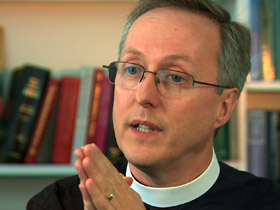 MARKHAM: It’s viewed as not recognizing the value of and integrity of our traditions.

FAW: Conversion, then, is a touchy issue which newfound Catholics handle both diplomatically and bluntly.

HURD: I think it’s very important that this initiative is identified as a response and not an offer. You know, we’re not trying to steal sheep or to poach. We’re trying to pastorally respond to those who wanted to come in this direction for some time.

FAW: Whether “poaching” or a natural “evolution,” Episcopalians troubled by what’s happened at St Luke’s and elsewhere argue that their Church simply cannot sit back and watch.

MARKHAM: I think this could be quite a healthy movement for the Episcopal Church, because what it does is it keeps the Episcopal Church focused on providing a theological rationale for the things that we do. Too often we couch our changes in terms of policy or positioning on questions like sexuality, in terms of secular discourse. We as a tradition need to be as self-confident as Roman Catholics are. We need to be equally robust in saying, look, we actually think we have discerned what God requires of us as a community in the world. And we need to put our vision up against the Catholic vision. 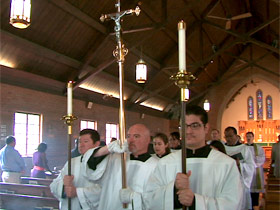 FAW: While some Episcopal leaders have made conversion difficult, that was not the case here at St Luke’s. Under generous terms, this parish gets to keep its building. But however the conversion is handled, church leaders see little need to back down from where the Episcopal Church stands on social issues.

SUTTON: One thing that the Episcopal Church does that is very attractive to people is that we try to do two things at once, and that is hold onto the ancient past, We believe in tradition. But the other thing we do well is embrace the new. We do not believe that in order to follow Jesus means we have to have our heads in the sand, and we cannot be open to any new understanding or any new way of being the church.

FAW: For new converts, though, it is that very tension between embracing both the old and the new which has caused them to turn in a new direction.

LEWIS: It was a move to going to what we believe as truth and what we know is truth, and I don’t think there’s anybody alive that would know what truth is and not move to it.

WHITTAKER: It is going home. It really is, and it feels good. Everyone’s been so very helpful, and I’m at peace. I’m at peace.

FAW: Here where “going home” brings comfort to a small congregation and implications for the wider Episcopal Church.

For Religion & Ethics NewsWeekly this is Bob Faw in Bladensburg, Maryland.