ABED AWAD, Awad & Khoury Law Office: We can have a will compliant with shariah, no problem.

KIM LAWTON, correspondent: At the Awad & Khoury law offices near Newark, New Jersey, attorney Abed Awad consults with Muslims about creating contracts, wills and other legal documents that adhere to the principles of shariah, Islamic law. And that’s important to Muslims like Asif Mustafa.

ASIF MUSTAFA: The way of shariah means that there’s a guideline for how I should be interacting or doing commerce.

LAWTON: Awad says over the past decade, he’s handled more than 100 cases that have involved some component of Islamic law. Now, a growing movement seeks to ban state courts from considering Shariah in any way. Awad says this would restrict his ability to litigate cases…and judges’ ability to decide them.

AWAD: These things will trickle down to your average American Muslim when it comes to distributing his estate, getting married, issues regarding their dissolution of marriage. This is divesting courts of their own authority. 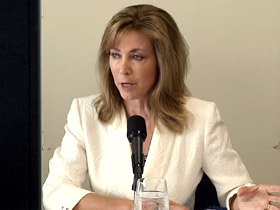 LAWTON: But proponents say legislation is necessary to protect American interests. Karen Lugo is an attorney and anti-shariah activist.

KAREN LUGO, Center for Constitutional Jurisprudence: The problem is that within a society of a Western culture, you cannot have two prevailing legal systems side by side. Ultimately there will be a breakdown of what we, in our country, have agreed to be governed by, which is this consent to live under a rule of law, not of men, not of clerics.

LAWTON: Shariah is an Arabic word that means “path to the watering hole.” For Muslims, shariah is the divine law revealed in the Quran.

AWAD: Shariah is a methodology to engage in the divine text, to ascertain divine will. It’s constantly in flux, it’s evolving, it’s very flexible. 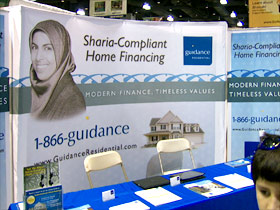 LAWTON: The bulk of shariah deals with topics surrounding worship, diet, family relationships and financial transactions. But there are also principles for political order, crime, and punishment. And how these have been interpreted and applied in many predominantly Muslim countries raises concerns here in the U.S. David Yerushalmi, an attorney and Orthodox Jew, is one of the most prominent—and controversial–voices in the anti-shariah movement.

DAVID YERUSHALMI, Center for Security Policy: If you look at the actual doctrine that the Mujahedeen, the various jihadists around the globe say drives their jihad against the west, it is shariah law and its doctrine of jihad. If we are to take them seriously, and I would of course suggest that we ought to, than that becomes a national security threat.

LAWTON: Some people who have lived in countries where shariah is the basis of law agree.

NONIE DARWISH, Former Muslims United: It’s really time for the West to understand, what are the consequences of welcoming shariah, or even saying that shariah is misunderstood. There is nothing misunderstood about a law that condemns women to stoning, to death, and to flogging. 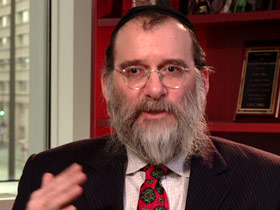 LAWTON: There’s been a contentious shariah debate across the country. In 2010, voters in Oklahoma passed an initiative to ban state courts from considering shariah. But a court challenge has so far prevented it from taking effect. Activists are now supporting bills that don’t explicitly mention shariah, but instead ban courts from considering any foreign law. Four states have now enacted such laws, and similar bills have been taken up in more than 20 other states.

YERUSHALMI: It doesn’t identify Shariah per se because it doesn’t have to, although Shariah certainly incorporated within its reach. It says, any foreign law or foreign judgment that would violate in the particular case at issue a fundamental constitutional liberty of one of the parties, due process, equal protection, the court will not grant it recognition.

LAWTON: Azizah al-Hibri is professor emeritus at the University of Richmond Law School and founder of Karamah, Muslim Women Lawyers for Human Rights. She says she too is concerned by how shariah has been interpreted and implemented in some places, especially overseas against women, arguing that it is not a true representation of Islam. Still, Al-Hibri says anti-shariah legislation is unnecessary because under the American legal system. 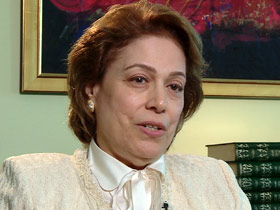 AL-HIBRI: Our constitution basically trumps everything else. And that also goes on the state level with the state law. You don’t just bring a law from another country and impose it here if it is against public policy. That’s not how we work here.

AWAD: We can have a valid polygamous marriage out of Egypt and if this polygamous marriage is brought to the United States and the court is requested to enforce Egyptian law which would permit polygamy, but that violates our public policy, so a US court would not recognize it.

LAWTON: Awad, who also teaches at Rutgers Law School and Pace Law School, says the circumstances where shariah is relevant in US courts are limited, mainly to providing additional information for a judge reviewing, for example, a contract that follows shariah financial guidelines.

AWAD: He applies basic New Jersey contract law. So he’s not really enforcing shariah. Shariah is just a tool to aid the court to better understand what it is reviewing. 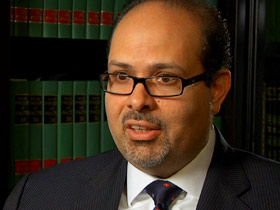 AWAD: This vast net that is being cast to prevent state judges from considering any foreign law is catching in its net Jewish law, Canon law, Hindu law.

LAWTON: Interfaith groups, including many Jewish groups, have also been vocally opposed to the legislation.

RABBI DAVID SAPERSTEIN, Religious Action Center: We refuse to be divided along religious lines. It is what is at stake in this debate over shariah law. And I’m proud to stand with all of you and my colleagues here to say that is simply un-American at the deepest and most profound level.

LAWTON: Anti-shariah activists contend that Islamic law has been used in unfair decisions against women, especially in domestic cases. In the most frequently-cited case, a New Jersey woman tried to get a restraining order against her husband, alleging that he raped and beat her. After hearing testimony that the husband’s Muslim faith obligates wives to have sex with their husbands, the judge denied the restraining order. Many Muslims agree that was a mistake.

AL-HIBRI: Muslims were upset because we don’t believe especially women, that God permits the man to beat the wife. Human rights activists were upset. Constitutional scholars were upset. Everybody was upset. And you know who was upset as well? The appellate court which immediately reversed that decision, because it was a bad decision. 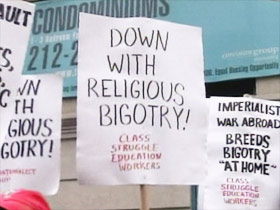 YERUSHALMI: The woman happened to have an attorney and she happened to have sufficient funds to make an appeal. And only then was it corrected. Well, how many women, like this woman, who can’t afford an appeal?

LAWTON: Muslims around the country say the legislative efforts discriminate against them.

NAEEM BAIG, Islamic Circle of North America: It is to create this fear of Islam and Muslims in the larger society, that “oh, Islam does not belong in America. These are foreigners, don’t trust them.

LAWTON: The Islamic Circle of North America, ICNA, has launched a national multi-million dollar campaign to counter what it believes are negative misperceptions about shariah. The campaign features billboards, informational mailings, and community forums about what shariah is and is not.

ASIM KHAN: Thank-you for calling 1-855-Shariah. How can I help you?

LAWTON: ICNA has also set up a toll-free hotline where Muslims and non-Muslims can call to ask questions about shariah or get information about the push for legislation. 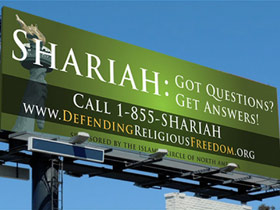 BAIG: They can say that it is anti-foreign law but we know that it is targeting one community, one faith.

LAWTON: Anti-shariah proponents say they intend to keep up the pressure on at the local level.

YERUSHALMI: If the law doesn’t pass, it engages enormous debate because the opposition has put the brakes on, but that means it comes up again at the next session and there’s another public debate.

LAWTON: Al-Hibri’s group Karamah has been sponsoring town-hall meetings to make sure the public debate includes Islamic law experts. She says open dialogue and education are the only way to resolve the conflict.