BETTY ROLLIN, correspondent: Joel and Scott Tinsley-Hall combined their names when they married in Iowa three years ago. They were both brought up in conservative religious homes, which made their paths to this marriage long and difficult.

SCOTT TINSLEY-HALL: I was raised in a fundamentalist Baptist church. My dad was the music minister of the church. There were expectations, like he said, that you’re not gay. If you are, you can change and you can become straight. 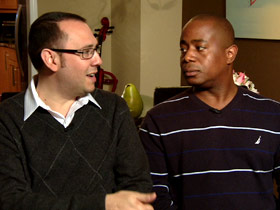 ROLLIN: Before they married, they first tried to find a church that would accept them, which they did in the mid-west. And why was it important for them to marry?

JOEL: We deserve the same rights, so me being a homosexual male, if I am in love with my partner for 7 years, I should have that same right to marry him. It’s not a religious thing, it’s an equal rights thing.

SCOTT: It was a chance for me to stand before my family and friends and put my relationship on the same level as theirs.

JOEL: That’s right. Plus there’s that whole protection aspect of it as well, because, you know, if you have a civil union, let’s say if Scott got sick, his family could come in and deny me visitations in the hospital.

ROLLIN: Now in Baltimore, Scott and Joel have found the Open Church where their pastor, Rev. Brad Braxton, is a strong advocate for gay marriage.

REV. BRAD BRAXTON (The Open Church): The love that my lesbian, my gay, my bisexual, my transgender friends share, one with another in committed relationships is equally as valid in the sight of God, not just the State, but in the sight of God, as is the love shared by heterosexual couples.

ROLLIN: What makes you sure that God does want this? 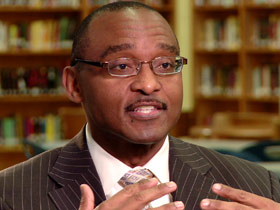 REV. BRAXTON: Because God is love. I am persuaded that God is love, and that for me is the fundamental message of scripture.

BISHOP HARRY JACKSON (Hope Christian Church): How is it that the group that says it’s being discriminated against takes all the authority, all the privilege, all the rights, pulls all the levers and has greater rights than the rest of us?

ROLLIN: Not too far away in Beltsville, Maryland, Bishop Harry Jackson has been a major opponent of gay marriage.

(to Bishop Jackson): Where does it say in the bible that homosexuals shouldn’t marry?

BISHOP JACKSON: It says it all over. Start with Deuteronomy, Leviticus, 1st Corinthians, go on and on….

ROLLIN: It says homosexual shouldn’t marry in the Bible?

BISHOP JACKSON: No, there’s a prohibition against homosexual activity. 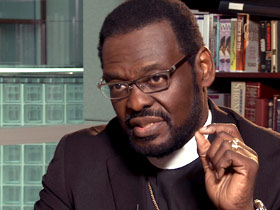 REV. BRAXTON: I take the Bible with the utmost seriousness. Yet I realize that there are times when the Bible misbehaves. It is not at its best self. The Bible promotes genocide, the Bible lessens half of the human race in its dehumanizing statements when it talks about women. The Bible says a lot of things.

ROLLIN: Many pastors in Maryland and elsewhere have weighed in on this issue. Rev. Al Sharpton:

ROLLIN: Rev. William Owens on the issue of civil rights:

PRESIDENT BARACK OBAMA: I believe that gay couples deserve the same legal rights as every other couple in this country. 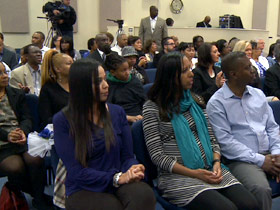 ROLLIN: Now that President Obama has come out in favor of gay marriage, Bishop Jackson and others want their congregations to deny the President their vote.

BISHOP JACKSON: Just because somebody’s skin is black you’re going to support an anti-God, anti-Gospel agenda, no wonder you can’t get a job. Beware my Christian friend, you should not vote for Barack Obama.

ROLLIN: Rev. Braxton believes that the reason that many African Americans oppose gay marriage has to do with their history of being denied the right to marry as slaves.

REV. BRAXTON: When you are disallowed a right and you are requesting to get the right, one of the best ways to do that in the face of those who hold power is to show that you are morally respectable. And so heterosexual marriage and lifting up the family, that is the morally respectable way. And anything that deviates from that my in fact bring again upon us that whole cycle of shame and violence, and that is so deep in African American culture.

SCOTT TINSLEY-HALL: As more people are open with their sexuality, our friends, our family, our mothers, our fathers, our grandparents who may have at one point had a different view, say “Wait, that’s my grandson I’m talking about now, or that’s my son, or that’s my nephew,” and that’s what’s going to change the church eventually. It’s going to bubble up from society. As society changes, the church will change.

ROLLIN: Same sex marriage is legal in 6 states. If Maryland votes in its favor, it may be the first state to legalize gay marriage as a ballot initiative. For Religion & Ethics NewsWeekly, I’m Betty Rollin in Baltimore, Maryland.