BOB ABERNETHY, host: Much of the East Coast is still grappling with the devastation of Hurricane Sandy. The storm affected at least 17 states, caused massive flooding, and left millions without power. Religious leaders, including Pope Benedict the 16th, prayed for the victims and for a strong recovery. And many faith-based groups quickly rallied to help those impacted by the storm—among them, the North American Mission Board, the relief arm of the Southern Baptist Convention. Mike Ebert is the Mission Board’s vice president for communications. He joins us from the board’s headquarters in Atlanta Georgia.

Mike, welcome. Let me begin with inviting you to talk about the extent of the SBC’s efforts here. How many people do you have? What are you doing?

MIKE EBERT (Southern Baptist Convention): Well, Bob, we have 82,000 trained disaster relief volunteers, 15,000 disaster relief units, and we will by Monday be at a 400,000 meal capacity. So we’ll be preparing 400,000 hot meals to be served to victims and other first responders, and that will be kind of the beginning point for us. We’ll see where it goes from there. 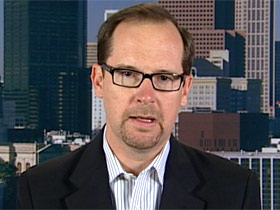 ABERNETHY: I heard on the radio the mayor of Hoboken a couple of days ago pleading for people in the neighboring towns to come bring them food. Do you hear that kind of thing?

EBERT: We do. We’ve been watching the reports like you, and we do have several of our people on the ground already, and so that’s why just as this is an historic disaster for the United States, it’s going to be a historic response for Southern Baptists. We’ve mobilized every mobile kitchen unit we have east of the Rockies, so that’s how big of a response this is going to be.

ABERNETHY: And people are coming from where, all over the country?

EBERT: Really, we have units as far away as Texas, Oklahoma, Missouri, who are on their way now. We have 15 kitchen units that are already set up and preparing hot meals.

ABERNETHY: What’s the priority? The meals? 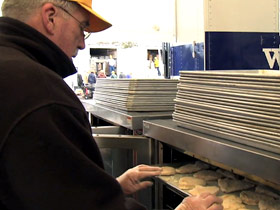 EBERT: Right now the priority is the meals, because so many people have been—well, they’re just not even in their homes. They’re in shelters, or they’re without power, and that could remain the case for another three weeks. But after that, we also have other units that will come in and help with tree removal so people can get power restored; help with mud-out work for homes that have been flooded. So it’s a very comprehensive response.

ABERNETHY: Is the government doing so much that there’s not much work left for the private groups, or is there plenty of work for you?

EBERT: Plenty of work. It’s very much a partnership. We work very closely with FEMA. We have a representative in their D.C. office; same with American Red Cross. We have a representative there. So it’s very much a partnership between Southern Baptists, the American Red Cross, the Salvation Army, and we all work together very well and with local governments.

ABERNETHY: And quickly, Mike. It’s a spiritual relief program as well as a material one, isn’t it?

EBERT: Sure is. First we want to relieve the physical suffering, but secondly we do have chaplains that come in with every unit so they can be there for spiritual counseling, spiritual encouragement. This very much is just as much a physical crisis as it is a spiritual and emotional crisis for people.

ABERNETHY: Mike Ebert of the Southern Baptist Convention. Many thanks.