BOB ABERNETHY, host: Like many others in the nation, faith groups are assessing the impact of this week’s election. According to exit polls, President Obama won a slight majority of Catholic voters overall, thanks largely to strong support from Latino Catholics. Mitt Romney won the white Catholic vote by an almost 20-point margin. Almost 80 percent of evangelicals who voted voted for Romney. Black Protestants went overwhelmingly for Obama, as did the vast majority of Jews. But the biggest share of Obama’s faith coalition was voters who say they aren’t affiliated with any religion.

Steve Schneck was co-chair of Catholics for Obama. He says while issues like abortion, religious liberty, and gay marriage were important, in the end it was the economy that tipped the scale for the president.

STEVE SCHNECK: All of these religious issues, while they are important to religious voters, I think, even among religious voters they ranked these issues a little further down on the spectrum.

ABERNETHY: Ralph Reed of the Faith and Freedom Coalition admitted that a massive mobilization among religious conservatives wasn’t enough to offset the number of women, young people, and minorities who voted Democratic. 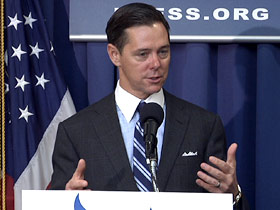 RALPH REED: I think we need to do a better job of not looking like, you know, your daddy’s religious right. You know, we have to be as a movement younger. We have to be more diverse ethnically.

ABERNETHY: Voters also decided several key ballot initiatives. For the first time ever, measures to approve same-sex marriage passed by referendum in Maine, Maryland, and Washington State. And voters in Minnesota rejected a proposed constitutional ban on gay marriage. In Massachusetts, a measure to legalize physician-assisted suicide was narrowly defeated. In California, voters decided not to abolish the death penalty.

With all the acrimony around the election, many religious leaders called for a new spirit of civility. More than 700 churches held special Election Day Communion services. Organizers said they wanted to refocus allegiance to God and work for justice beyond the ballot box.

Now, more on this week’s presidential election: I’m joined by Kim Lawton, managing editor of this program; Kevin Eckstrom, editor of Religion News Service; and Rachel Zoll, national religion writer for the Associated Press, who’s with us from New York. Kim, underneath all the data do you see a message?

KIM LAWTON: Well, there’s definitely a message for, I think, the Republican Party and the religious right—that those old faith-based coalitions that won elections aren’t winning those elections any more. I mean, you had—evangelicals did an unprecedented mobilization. They came out to the polls, and they voted more for Republicans than they have in previous elections even. You had, when you break out by race, almost 60 percent of white Catholics going for Romney and still those two together weren’t enough to tip the election, and that’s different than previous elections, and believe me that’s making many of the people inside the religious right, but also inside the Republican Party, taking notice. 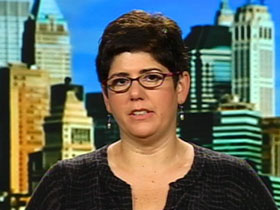 ABERNETHY: Rachel in New York: did you see any pattern or message in all that data?

RACHEL ZOLL: I think one of the messages is a growing acceptance for Mormons by the Christian conservatives. The—we saw at the beginning of this election, people thought that Mitt Romney’s faith, his Mormonism, was going to keep evangelicals from the polls. Now we don’t have final numbers on the size of the electorate, but it’s clear that he won— Governor Romney won the overwhelming percentage of white evangelical votes. They did vote for him despite theological differences.

ABERNETHY: And how do you interpret that?

ZOLL: That Mormons have, in a growing way—are gaining acceptance in the United States.

ABERNETHY: Kevin, what did you see?

KEVIN ECKSTROM: I think one of the big take-aways, not just on religion, but just generally is the growth of the Hispanics. I think what, 71 percent of Hispanics voted for President Obama, and that’s not just a message for the Republicans or the Democrats, but I think also for evangelicals that the coalition that they’ve always relied on, primarily white, primarily older, primarily male, isn’t going to cut it anymore. And so I think you’re going to see, perhaps, a bit more evangelical activism on immigration, which they’ve already been doing, but I think this election will really kind of ramp that up.

LAWTON: And it’s an interesting question.

ABERNETHY: And they’re talking about that coming up soon. 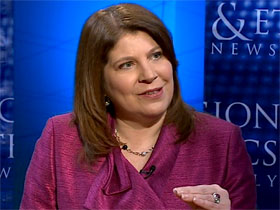 LAWTON: Exactly, exactly but that’s the question. Religious right leaders are saying, okay, we recognize we need to open up a little bit. The Republican Party recognizes they need to reach out. But how do you do that? Do you need to change the message? And I think that’s one question that people are taking away different answers on. Is the answer to be less extreme, or less dogmatic on issues like abortion and gay marriage? Will that appeal to more people? Now, Latinos tend to be more conservative on social issues, but they don’t tend to vote, by and large, on the social issues, so how exactly do you broaden that tent?

ABERNETHY: Rachel, you’ve had things to say about the difference between changing the language of something that you want to talk about and changing the position. Fill us in on that.

ZOLL: Well, that’s one of the fears I think among a lot of Christian conservatives, religious conservatives in the Republican Party—that the lesson that the party will take away from this is that they should not be speaking about social issues and that this emphasis on social issues is actually something that’s going to hurt them. Now the counter-argument that a lot of the different groups are making, including the anti-abortion groups, is that we had—they had a moderate nominee, Mitt Romney, for the job who did not talk enough about social issues, and that is one of the arguments I’m hearing.

ECKSTROM: But if you look, though, at social issues, if you rope in homosexuality with that, along with abortion that Rachel mentioned, I mean, we had a clear win for gay rights across the board almost in this election. So I think, yeah, you can talk more about abortion or homosexuality, but I think the numbers and the trends, at least on the gay question, maybe abortion’s a little different, but on the gay question I think what we saw this time is that it doesn’t have the same salience and the same power or even the same level of acceptance that many religious conservatives might think.

ABERNETHY: What does that say to you—that the country is becoming much more tolerant? 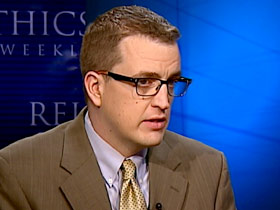 ECKSTROM: Yes, I think so. And I think, you know, we used to talk about the Will-and-Grace Effect back in the ‘90s, you know, where people learned about, you know, gay people, but now you have shows where you have two gay dads, and you’ve got a transgender character on “Glee.” The society is moving much faster than politics or even the religious institutions on this question.

ABERNETHY: Rachel, I wanted to ask you where do the election returns leave the relationship between the Catholic bishops and the president of the United States?

ZOLL: That’s the question. Things got very bitter this year between the bishops and President Obama when he enacted the birth control mandate that was part of the health care—his health care reform. He and Cardinal Dolan, who is the president of the U.S. bishops conference, once actually had a very friendly relationship. Instead, they now—you hear bishops very vehemently condemning President Obama throughout the election for his policies, saying he’s dangerous for the country and dangerous for religious freedom itself. It’s not at all clear how they’re going to work together going forward. One of the other problems that the bishops have is that when they went to Republicans who appeared to be more sympathetic and open to their situation, or their argument on the religious liberty question, ultimately did not do anything for them and dropped the issue.

LAWTON: And there’s some interesting, also, I think—tensions within the laity, the Catholic community, that we saw come out in this election. I mean, we saw outside Catholic players on both sides. The bishops were very active especially highlighting issues of religious freedom, abortion, marriage, traditional marriage. You also saw the “Nuns on the Bus” and people from the more progressive end in the Catholic Church raising issues about economic justice and budget concerns, and there were a lot of divisions, and frankly I saw a lot of vitriol in the Catholic laity, on the blogs and everything, between those two wings which—those differences have always been there, differences of emphasis maybe within the Church, but some of that vitriol really seemed to bubble up in this election.

ABERNETHY: So, the Joe Biden wing and the—

LAWTON: The Joe Biden Catholics and Paul Ryan Catholics, and they didn’t agree on a whole lot this time around.

ECKSTROM: But I think at the end of the day, Cardinal Dolan who heads the bishops conference is, in a lot, a lot of ways, in the same position as Speaker Boehner in the House, and they’re going to have to work with this president whether they like it or not. They tried maybe to defeat him. It didn’t work. But I think Cardinal Dolan at his heart is a pragmatist and wants to get something done, and the question is how they’re going to work together. I think they’ll be forced to work together.

ABERNETHY: Everyone talks about the message being, okay, you guys, go back to Washington, make some compromises, get something done. It’s not clear exactly what’s to be done although everyone agrees immigration is one of the things that’s very high. But a lot of people see this fiscal cliff coming, the need for Congress and the president to get together to prevent big, big cuts in spending and big, big increases in taxes. So how can the religious communities help in that?

LAWTON: Well, it’s interesting because religious people have been and will continue to be involved sort of in both ends of that debate, and for each side it’s a moral issue. So, you have Catholics, including the Catholic bishops, saying we need to help the poor. Budget cuts can hurt the poor and that, that’s a matter of belief, religious belief, and conscience for them. You have religious conservatives using moral language to talk about the debt, and it’s immoral to leave a debt to our children, and they’re pretty strong on that, and the press releases that I’ve been getting after the election certainly didn’t mention compromise as a religious value. They—all sides talked about staying strong on their particular positions.

ZOLL: One of the interesting things that this brings up is that this is an area where the bishops, the Catholic bishops, can work closely with the Obama administration, and I suspect that the Obama administration would very much welcome it. I don’t think anyone benefits, and they don’t feel that anyone benefits from the tensions between them, and the bishops have obviously not only a theology but an incredible track record in terms of supporting poor, the poor people in terms of charities, and they are very concerned about these social issues, and next week when they meet they will also be discussing the economy and poverty.

ABERNETHY: Our time is up, I’m sorry to say. Rachel Zoll in New York, thank you very much. Kim Lawton here, Kevin Eckstrom here in Washington, thanks to all of you.