BOB FAW, correspondent: In one of America’s most shameful chapters, thousands of African Americans—no one will ever know how many—were lynched. For two sisters who witnessed a lynching, memories still haunt. Ninety-four-year-old Katherine Fletcher will never forget how her one-time classmate was murdered in St. Joseph, Missouri eight decades ago.

KATHERINE FLETCHER: They chained him to the back of a car and dragged him up and down the main street in the black neighborhood, screamin, you know, “This will happen to you so and so.” Then they hanged him to a tree and set afire to him and burned his body.

FAW: Throughout the country, from the Civil War era well into the 20th century, African-American men, women—even some whites—were lynched, their bodies often shot, mutilated, and burned. Katherine Fletcher’s 92-year-old sister, Korea Strowder, remembers what a mob in Maryville, Missouri did to a black man accused of killing a white woman.

KOREA STROWDER: They decided to put him, chain him on the roof of the school and then set the school on fire.

FLETCHER: There was no evidence that this man was involved with her at all. But they had to pick up somebody.

FAW: Katherine Fletcher is one of over 70 elderly African Americans interviewed by Reverend Angela Sims for her Remembering Lynching project housed at Baylor University’s Institute for Oral History. 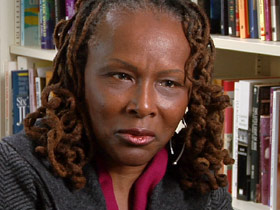 REV. ANGELA SIMS (St. Paul School of Theology): If we don’t capture the narratives now, they will be lost to history forever.

FAW: Angela Sims, who teaches ethics and black church studies at St. Paul School of Theology in Kansas City, Missouri, spent two years interviewing African Americans who grew up in what theologian James Cone calls “the shadow of the lynching tree.” They either witnessed a lynching, lived in fear of one, or in the case of 92-year-old Willie Matthew Thomas, narrowly escaped being lynched.

WILLIE THOMAS: One of them said, “Well look, are we gonna hang him? Guess we’re not.” Another one said, “Sure, we gonna hang him.” And so he made up the noose, and they put it round my neck. I remembered in the Bible it speak about how they treated Jesus, and they said, “They led him away to be crucified.” They led me away to be crucified, to be hung.

FAW: Thomas was saved when a white man, who knew his family, showed up with a shotgun and intervened.

Dr. Sims got the idea for her project when she heard a speech about lynching by retired minister the Reverend Wallace Hartsfield Sr. Now 83, he was only eight or nine living in Georgia when he peered from behind a curtain and saw a mob. 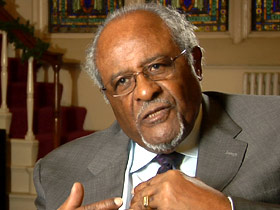 REV. WALLACE HARTSFIELD(Metropolitan Missionary Baptist Church, Atlanta): They had taken the man out, and they had used his body for gun practice, and then they had hanged him, and then cut him down and dragged him through the street and this was supposed to be a warning to, you know, “uppity niggers.”

FAW: Photographs were made of lynchings, then turned into postcards.

SIMS: When we think about lynching, particularly lynching as mob spectacle, it was very much a spectator sport. And so children were even dismissed from school in order to participate in the spectacle that was hanging, burning, maiming, dismembering.

STROWDER: I had to take the bus home, and I had to ride a bus through the mob and to see the joy on their faces, as if they were coming to a picnic.

SIMS: These postcards are just a graphic depiction of the way in which a culture of terror is almost endemic to what it means to be a citizen of this republic. Lynching was always more than the death act. It was really designed as a way to control human behavior.

FAW: Sims found that those who witnessed lynchings were left initially with fear and bitterness—then lifelong scars. 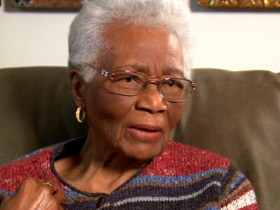 FLETCHER: It made me hate with a kind of hate I had never experienced. And I hated all white people. It was a hate that was really beginning to make me ill after awhile.

FAW: Raised a Baptist, Fletcher’s faith was shaken by what she had seen.

FLETCHER: If the Lord that I hear about is the Lord of mercy and love, why would something like this happen?

FAW: What is remarkable—what nearly all those who encountered lynchings told Sims—is that despite the evil and the terror, they were not only able to carry on, the were also able to forgive.

FLETCHER: I had to. I realized that it was a burden on me, it was such a burden carrying around this weight of hate. I guess my answer was Jesus was hated and treated so badly but he could, could, could forgive. If he could forgive, I should be able to forgive also. 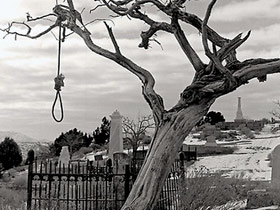 THOMAS: What that white man did to me—come and rescued me and took a chance on his life—that gives me a sense of forgiveness. I forgive those people. You have to do that.

FAW: Sims calls their faith “the theology of liberation.”

(to Sims) You at one point said, “I’m listening for what salvation and redemption might look like.”

SIMS: I marvel at people’s ability to not only live through what they experienced but not to become consumed by hatred. For some it was arriving at a point where they recognized that even in the midst of evil, God was still with them.

FAW: Their lives, their testimony, an affirmation that lives once scarred can transcend evil.

HARTSFIELD: I think my faith must dictate to me what I say, what I do, how I act, how I live my life. And my faith teaches me that I am to forgive.

FAW: Even as the lynching tree continues to cast its shadow, this is a tale of remembrance and redemption which shows that it is possible to move into the light.

For Religion & Ethics NewsWeekly, this is Bob Faw in Kansas City.