BOB ABERNETHY, host: This weekend of inauguration celebrations, we want to explore the mood of the country and perspectives on the next four years with three distinguished people of faith. They are the Right Reverend Mariann Edgar Budde, Bishop of the Episcopal Diocese of Washington, DC; John Garvey, a lawyer and the president of the Catholic University of America in Washington; and Harold Dean Trulear, a professor of theology at the Howard University Divinity School. He joins us from Philadelphia, where he is active in ministry to prisoners. Welcome to you all. Professor Trulear, four years ago for many people there was an extraordinary mood of excitement and hope. What happened?

PROFESSOR HAROLD DEAN TRULEAR (Howard University Divinity School): Well, I think that what we were witnessing four years ago was sort of like a revival service. There was a real sense of expectancy, a real sense of hope, and like all revival services, at the end of the service you’ve got to go out and get the work done. And some of the energy begins to dissipate, some of the hope begins to dissipate as you come up against the harsh realities in the society, and I think it’s just natural that the second time around you don’t have the same type of expectancy. I see the first time as a revival service, and now it is communion and renewal, healing. That’s the kind of service mood I see this time. 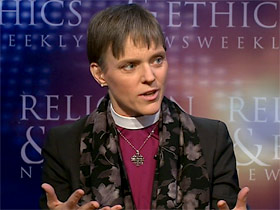 BISHOP MARIANN EDGAR BUDDE (Episcopal Diocese of Washington): Well, what I—my sense was that the president really saw himself, and we saw him, as the one who would bring us together as a country. There wouldn’t be red America, there wouldn’t be blue America. We would be one country together, and what we learned in the first administration is that we were not yet ready to be that country, that we are far more isolated and polarized as a country than we knew ourselves to be, and what we wanted ourselves to be at that time. So my sense is that the task now isn’t so much to speak to the middle but to, in fact, help create a middle where there it’s so much easier for us to stay in our isolated areas with people who think like us, and the president’s task and the tasks of communities of faith is, in fact, to create that common ground where we can find the compromises that we need to make to go forward.

ABERNETHY: Let’s come back to that. President?

PRESIDENT JOHN GARVEY (Catholic University of America): There’s a temptation in talking about these things to look to the president and the government as the leaders in all of these matters, and that’s maybe a mistake in matters of religion. You know, we live in a country where the president is not the head of the national church. It’s people like the bishop who are religious leaders. I think it might be, for many of the issues we’re dealing with in the country, more forceful and outspoken religious leadership from religious leaders would be helpful. I think about immigration as a good example and gun control as another. On the other hand, there are some matters, just to finish the thought, where the conflicts that we’ve had are between the government and private actors, the fight we’re having over health control, health care.

ABERNETHY: When you talk to students at Catholic University, and wherever, do they seem to you kind of disillusioned? 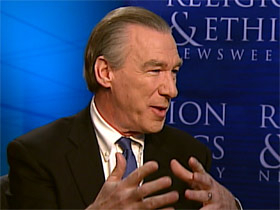 GARVEY: Maybe with the possibilities of political solutions for our problems, but young people are much more hopeful than the rest of us, so I think there’s always a much more optimistic spirit on college campuses than there is out in the world.

BUDDE: Well, I would even say, I take it further, and I have two young adult sons, so I watch through, I often watch the work of the country through their eyes and through the young people that I serve, and my sense is in this election, the most recent election, that the future of our country kind of showed up and voted in a way that no one was really expecting that they would, given what you surmised, which was a sense of, perhaps, disillusionment or, in the professor’s words, the revival being over. But, in fact, I think they came back more seasoned, more realistic, more determined to do the hard work to bring about the kind of political consensus that we need, and particularly in the state of Maryland, if you look at the two issues that were passed on referendum, the religious communities, the immigrant communities, people of color—they all came together in ways that totally surprised the expectations, given what was perceived to be such a mood of pessimism, even just months before.

ABERNETHY: What about you, Professor Trulear? Do you sense any little glimmer of hope anywhere that things can be better? 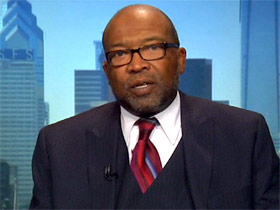 TRULEAR: Oh, I think there’s a lot of hope. I think that it’s just more grounded in reality, which is, I think, the gist of the bishop’s comments—that there is a sense that there were things that were accomplished during the first administration. I think she’s absolutely right. We have surfaced some of our unreadiness, but then that gives us a more clear agenda for the next four years. I think that also we’ve got glimmers of hope in some of the things that, some of the ways in which people came together around Hurricane Sandy. We’ve seen that in the New York, New Jersey, Connecticut area. Ways in which this country is now ready for a conversation on violence and gun control based on what happened in Newtown, Connecticut, and of course when the president made his remarks about Newtown he not only included Newtown, but he also included the streets of Chicago, and so there is, there are these different packets of hope, even in the midst of difficulty, that a number of our students at Howard University and other people that I work with are latching onto at this time.

BUDDE: I would also say that one of the things that we are learning is what we would need to do as a country in the face of natural societal resistance to change, and that there is—there are hard lessons to be learned about how to lead in times of polarization which are different than in times when we, when the country is more naturally coming together, and so those require different leadership skills, different spiritual skills, different levels of truth-telling.

ABERNETHY: I wanted to pick up on something that you said, Professor Trulear. When we were talking earlier you spoke about not just gun control, but violence control. Talk about that a little bit.

TRULEAR: Well, gun control is a piece of violence control. We’re a very violent nation. I often talk with my students about the fact that Thanksgiving is the big holiday in the United States because we get to eat as much as we can, which is our consumerism. Then we get to watch football which is a celebration of violence. That’s who we are, and the violence that we see on our streets, the violence that we see in the mass killings is a reflection of a lack of civility all the way around in our country. One of the things that I know a number of faith leaders are doing, and we saw it in the Washington Post this past Thursday, is calling on a more civil tone of political discourse, because there’s violence in words and the ways in which candidates attacked each other during the campaign and the ways in which the bipartisan divide is being reflected in vehement speech and violent speech towards one another. So it seems to me that there’s an opportunity for people of faith to deal with violence at a variety of levels, from mass killings to street violence to the way we talk to each other, and our leaders need to model that. That’s one thing that I think our president has been very good at. 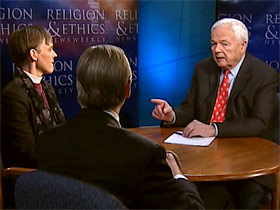 GARVEY: You know, one of the hopeful signs that I saw coming out of the last election was an increased attention to the problem of immigration reform on both sides. I think the role that the Hispanic and Latino community played in the election outcomes themselves brought the Republican Party, or the parts of the Republican Party that have been hard to move on immigration reform, back into the center on this issue. That’s an area where I think we’re going to see, we’re going to see real results, both Marco Rubio on one side and President Obama on the other side.

BUDDE: It’s also instructive, I think, in terms of how the political landscape is influenced by what’s happening on the level where people live. The reason the politics shifted is because the country is shifting, and when the country shifts in such a dramatic way there’s really no choice but for the political realities to shift in response to those.

ABERNETHY: This is what I was trying to get at, whether we can look to churches and to denominations and different religions for some kind of coming together that will be a model as well as an encouragement for people, for elected officials.

BUDDE: There’s a model, but there’s also a, yes, coming together, but also having—learning how to have conversations on very difficult topics. Yes, without insulting and demeaning each other, but also trying to present one’s perspective from our personhood, who we are as children of God, so we can’t so easily demonize one another or dismiss one another as unworthy of our consideration.

GARVEY: But this is what I mean by tending to see everything through a political lens. So you’re talking about our job ought to be that we model behaviors so our politicians behave better, but in fact this is a religious issue in a much more important sense. The Christian churches and the Jewish congregations, the Muslim congregations believe that taking care of the poor, the orphans, the aliens is a religious obligation because we’re all children of God, and so in the first instance we want to do it because it’s good for the people who are here and need care among us, and the politicians ought to be listening to that.

ABERNETHY: Well, our time is up I’m sorry to say. Thank you very much, Right Reverend Mariann Edgar Budde, President John Garvey, and Professor Harold Dean Trulear. Many thanks to each of you for an interesting conversation.