BOB ABERNETHY, correspondent: As we have reported, a recent poll by the Pew Research Center found that nearly one in five—20 percent of Americans—say they have no religious affiliation. Many of them are people who say they are “spiritual but not religious.” They may believe in God, but they do not want anything to do with organized religion. Meanwhile, books by prominent atheists have condemned religion in general and Christianity in particular. These criticisms have offended many religion leaders, among them the Reverend Lillian Daniel, who has a book out this month called “When ‘Spiritual But Not Religious’ Is Not Enough.” Full disclosure: I wrote a blurb for the cover.

At the First Congregational Church in Glen Ellyn, Illinois, an upscale suburb of Chicago, Lillian Daniel is the senior minister. She says she has had enough of outsiders who bash the church, and of church people who don’t protest. So she is pushing back herself—in a new book, in articles, and in sermons she preaches as a guest minister around the country.

At Howard University in Washington, DC recently, Daniel railed at writers and others who, she says, have blamed the church for many of the world’s biggest problems. 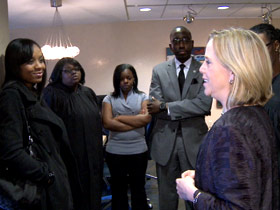 REV LILLIAN DANIEL: What church community are you describing? Because it is not mine. And how dare you presume to paint me with that broad and offensive brush? So why is it that when the ‘spiritual but not religious’ complain about Christianity, why don’t we get mad? Why don’t we tell them a different story, of a progressive church where your questions are welcomed, where we worship a God who invented us and not the other way around.

ABERNETHY: Daniel’s audience included the dean of the Howard chapel and Howard’s president and his wife. She referred to them when she acknowledged her own part in what she calls America’s culture of narcissism.

DANIEL: …in which it is so easy to think, “It’s all about me.” So much so that when the dean told me quietly that the president and first lady were here today you know where my mind went. I’m from Chicago. I said, “Barack and Michelle? Here?”

ABERNETHY: But Daniel’s humor is not always so gentle. She ridicules people she says try to make up their own God and their own forms of worship.

DANIEL: Often some shallow combination of exercise and caffeine, coffee shops as spiritual community, hikes as pilgrimages, The New York Times as sacred text, and sunsets—don’t ever forget the sunsets. These people are always informing you that they find God in the sunsets. Well, excuse me, as if people who go to church didn’t see God in a sunset. You know, my take is that any idiot can find God in the sunset. What is remarkable is finding God in the context of flawed human community, and a tradition bigger than you are with people who may not reflect God back to you in your own image. 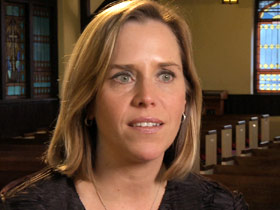 ABERNETHY: Another favorite target for Daniel are Christians who seem to her confused about how God works.

DANIEL: About a year ago, perhaps you remember this from the news, a man who was alleged to be Tim Tebow’s pastor announced to the world that he knew why the Denver Broncos were seven-to-one since installing Tebow as quarterback. He said it’s not luck. Luck is not winning six games in a row. It’s favor, God’s favor. Sorry, but that pastor seems to have skipped his theology class. Because saying that all those touchdowns were a sign of God’s favor is what I like to call touchdown theology, and in my book it gets a grade of F. Surely there are other Christians praying just as hard on other football teams. And what other players who follow other religions? That was personally embarrassing to me as a person of faith. But I also could not help but notice the glee with which the media glommed onto this touchdown theology. Remember that? They were writing about it right and left. It was something to mock in the Christian family, another reason to see Christians as stupid and simpleminded. 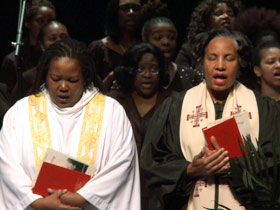 ABERNETHY: Along with Daniel’s complaints about the church’s critics, she also has great sympathy for those some churches have hurt.

DANIEL: Some people don’t like it because they really have been wounded by a church at some point. Or they have been a part of organized religion where they’ve been damaged and hurt in profound ways. All you can do is respond compassionately and just be so sad that that happened.

ABERNETHY: Still, she insists, most of the attacks on the church are unfair.

DANIEL: Where I get frustrated with some of the writing that’s being done by atheists now is they present a very denigrating and insulting vision of the church. I mean, they take, you know, the stupidest example you could find, and they say that’s Christianity. So, you know, the idiotic minister who wants to burn the Qur’an, you know. They say that’s Christianity looks like. These are intelligent writers who should know better. Other people get angry because they’re sort of like, how dare you make a positive case for what you’re doing? And that’s the sloppy thinking, where you are “shoving it down my throat.” You can make an intelligent argument why religious community matters without saying that the other person’s going to burn in hell.

ABERNETHY: Daniel wishes every critic would learn more about the church they’re criticizing.

DANIEL: It’s like we have this amnesia, like really, nobody in past generations studied this stuff and put some thought into it and it might be worth reading? Oh no, it’s just I can kind of get it on my own. And there’s this sort of almost worship of our own feelings and not much respect for traditions and experience and wisdom from outside ourselves.

ABERNETHY: Daniel says it’s normal for some people, especially the young, to turn their backs on religion for a while.

DANIEL: What I think is sad is when people kind of get stuck there, and they know they’re missing something, but they’ve got this picture of religious life, that it’s judgmental and shaming and homophobic and sexist, all these things, and I just want to say look around you. There’s so many beautiful options in the religious landscape. You don’t have to be out there on your own.

ABERNETHY: Which was the message at the close of her sermon.

DANIEL: Life is not a picnic, and the people who finally dig in and put down roots in one tradition bigger than themselves figure that out. There is a middle ground between the rigidity of touchdown theology and the superficiality of make-it-up-yourself spirituality. It is called a mature faith, practiced in community over time, reasonable, rigorous, real, grounded in tradition, centered in worship, called to serve and free to dream. Amen. 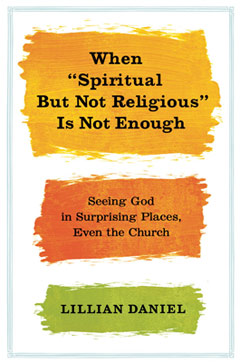 His dad was happy to stop with the self-made religion of gratitude, like a person who fills up on the deep-fried appetizers and doesn’t order anything else from the menu. He may not feel hungry for dinner now, but that snack will not sustain him for anything like real exertion. It tastes good, but it’s just not enough…When you witness pain and declare yourself lucky, you have fallen way short of what Jesus would do.

When you witness suffering and declare yourself to have achieved salvation in the religion of gratitude, you have fallen way short of what God would have you do, no matter what religion you are called to.

The civil rights movement didn’t happen because people felt lucky. The hungry don’t get fed, the homeless don’t get sheltered, and the world doesn’t change because people who are doing okay feel lucky. We need more.

As the scripture today tells us, “In accordance with his promise, we wait for new heavens and a new earth, where righteousness is at home.” We can’t sit back and simply feel gratitude, or feel lucky. No, as Christians we expect more, way more, like a new heaven and a new earth, and because we follow Jesus, we better expect to be involved in making it happen, alongside other people.

Gratitude is a biblically commended attitude. Feeling lucky is another religion altogether, one that says the gods pick one teenager to live in the suburbs of the richest nation on earth and another teenager to starve. In a worldview of luck, righteousness is really not a home.

But at some point the worldview of luck just doesn’t pan out. At some point you realize that this isn’t enough, and you long for something as outrageous as a new heaven and a new earth. At some point, if you think about it at all, that person with the self-made religion will use his God-given brain and the wisdom of hard experiences and start to ask angry and provocative questions about this spirituality of status quo.

I’m not against gratitude, any more than I am against finding God in a sunset or a child’s eyes. Those are all good tings, along with puppies, rainbows, great vacations, and birthdays. But here’s the thing—none of that constitutes a religion, and I actually believe, contrary to popular wisdom, that in an age of spiritual people who are not religious, we need religion, and its dearest expression to this particular religious Christian person, the church.

I remember a family new to our church, whose grade-school-age kids had only a year of Sunday school under their belts. In the middle of what was his second Christmas pageant rehearsal ever, the little boy cried out in total exasperation, “Do you mean to tell me that we are doing exactly the same story we did last year?”

Today that youngster is grown up and has been blessed by the repetition that gives his chaotic days meaning. In a world that demands that everything be a one-time-only original production, the church remains a place to remember that there is a someone much better than we are at original creations.

From “When ‘Spiritual But Not Religious’ Is Not Enough” by Lillian Daniel (Jericho Books, 2013)

Tags: Christianity, Lillian Daniel, None of the Above, religiously unaffiliated