KIM LAWTON, managing editor: Before Monday’s public swearing-in ceremony, the Obamas attended a special worship service at St. John’s Episcopal Church. Protestant, Catholic, and Jewish leaders were part of the service, which was closed to cameras. Then, the public ceremony began with an invocation by Myrlie Evers-Williams, widow of slain civil rights leader Medgar Evers and the first laywoman to give an inaugural prayer.

MYRLIE EVERS-WILLIAMS: We invoke the prayers of our grandmothers, who taught us to pray, “God, make me a blessing.”

PRESIDENT OBAMA, in inaugural address: The oath I have sworn before you today, like the one recited by others who serve in this Capitol, was an oath to God and country.

LAWTON: The president cited God many times in his address. He laid out a liberal vision for the nation, which included an explicit endorsement of gay rights. 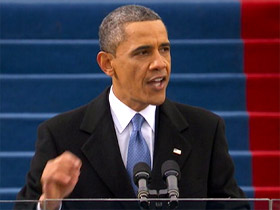 OBAMA, in inaugural address: Our journey is not complete until our gay brothers and sisters are treated like anyone else under the law.

LAWTON: That was praised by some faith-based leaders who called this “the most LGBT-friendly” inauguration in history. But religious conservatives were critical, calling the statement “strident and divisive.” Many evangelicals are still upset that Rev. Louie Giglio, who was originally set to give the inaugural benediction, withdrew because of controversy over a sermon against homosexuality that he gave in the 1990s. St. John’s rector, Luis Leon, offered the benediction instead.

Evangelicals did participate in the interfaith Inaugural Prayer Service at Washington National Cathedral on Tuesday (January 22). With the Obamas and Bidens in attendance, representatives from a broad array of religious traditions prayed for the nation and its leaders. The service included Protestant, Catholic, Jewish, Muslim, and Sikh participants. A major theme of the event was finding a common vision in a nation that remains deeply divided. 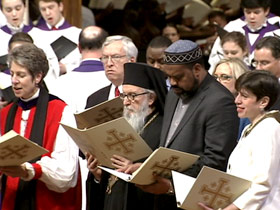 BOB ABERNETHY: Kim, for all the religious diversity at the Cathedral and at other events, the inauguration itself, the main event, was remarkably Protestant only. A Protestant giving the invocation, a Protestant doing the benediction. Did you hear any complaints about that?

LAWTON: I didn’t hear any complaints, probably because there was so much diversity at some of the other events. The last few inaugural events have been very Protestant in terms of the religious leaders who participated. That hasn’t always been the case. During FDR’s time, there was a Catholic. There have been Jewish leaders, Greek Orthodox leaders in the past who have done it.

ABERNETHY: And the inauguration itself is always such a reminder of the intertwining of religion and government, the language, so many references to God, especially in the music.

LAWTON: The civil religion, America’s civil religion, is always at the forefront, what people call, this idea also people call American exceptionalism, that God has some kind of special, chosen place for America. President Obama, I thought, in his inaugural address also really harkened to that when he talked about this creed that we have, a national creed based on the Declaration of Independence, life, liberty and the pursuit of happiness. It was interesting this time around, a lot of religious conservatives talk about, you know, God has chosen us as a people, but to have a liberal put God with that liberal agenda was something interesting.

ABERNETHY: Many thanks, Kim.