Read an excerpt from BASEBALL AS A ROAD TO GOD: SEEING BEYOND THE GAME by John Sexton

JOHN SEXTON (President, NYU): (speaking to students) We’re going to do just a little bit of a wrap up.

FAW: And yet, like few university presidents, Sexton also finds time to teach four classes. He is famous for greeting his students and anyone else, for that matter, with a hearty hug, and demanding nothing less than their absolute best.

SEXTON: (speaking to students) Eugene O’Neill famously said he who stops at mere success and does not press on to glorious failure is a spiritual middle-classer. I don’t want you stopping at the easy. None of you.

FAW: Now the former law school dean and distinguished legal scholar has written a most unusual book: “Baseball as a Road to God.” That’s right, baseball. 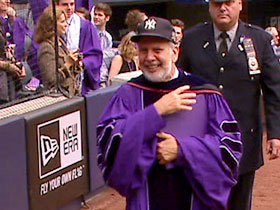 SEXTON: The similarities between baseball and religion abound. The ballpark as cathedral; saints and sinners; the curses and blessings. But then what I’m arguing is beyond that surface level, there’s a fundamental similarity between baseball and religion which goes to the capacity of baseball to cause human beings, in a context they don’t think of as religious, to break the plane of ordinary existence into the plane of extraordinary existence.

FAW: John Sexton says that what happens here is more than just a game—that it reveals a dimension beyond the eyes and mind letting us, in his words, “see through to another, sacred space”—what John Sexton calls “the ineffable.”

SEXTON: “Ineffable” is the word we use for things we can’t capture in our language. The ineffable is the character of this religious dimension, sometimes labeled God. We’re talking about this place where the depth of being is.

FAW: And baseball can be an avenue to that?

SEXTON: Baseball is an avenue to that in the sense that there is this dimension that we experience in baseball of that which can’t be put into words. 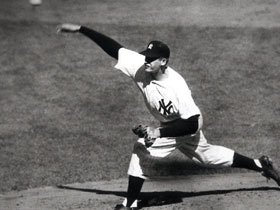 FAW: In baseball, as in religion, says Sexton, the seemingly impossible is part of the game:

In 1956, when hard-drinking journeyman pitcher Don Larsen went from sinner to saint by hurling the only perfect game in World Series history; when Willie Mays made that seemingly impossible catch and throw in the 1954 World Series; and in 1955, when Sexton’s beloved Brooklyn Dodgers, after decades of coming oh-so-close, won their first and only World Series with an extraordinary catch made by Sandy Amaros. Those moments in baseball, like religion, says John Sexton, give a glimpse of something beyond.

SEXTON: The beauty and the experience in the intensified heightened sensitivity of the moment that comes with the Amaros catch, that comes with the Mays catch and pivot. The ecstasy of those moments can for some transport one to this transcendent plane.

FAW: The excellence of Brooklyn Dodger great Jackie Robinson, now celebrated in a major motion picture “42,” sparked Sexton’s infatuation with baseball. Now he’s had Robinson’s number 42 sewn into his academic gown, and in his old office there’s one of Robinson’s original jerseys and a battered glove Jackie Robinson might have used, although true-believer Sexton isn’t about to check to see if Robinson actually did. 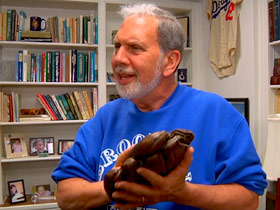 SEXTON: I chose to live in ignorance. This was the equivalent of saying, “Don’t tell me that the world’s not flat,” because I would rather… my stories, my feelings are much more comfortable in this world of heaven above, earth in the middle, flat as it is, and hell below.

SEXTON: Yeah, you gotta. There’s faith, and there’s ignorance, and in this case I chose ignorance.

FAW: Sexton says he chooses baseball over other sports because, like religion, it has its own sacred relics, prophets, and rituals. And like religion there is a kind of timelessness.

SEXTON: (reading from book) Baseball encourages, almost requires in its most meaningful moments, an appreciation of living slowly and in the moment—the kind of differentiated experience that separates the sacred in life from the profane. This experience is where religion begins.

FAW: It’s an insight, and an avenue to religion, which he imparts every week to a small class of undergraduates. 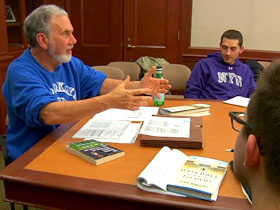 SEXTON (speaking to students): This is the essence of this religious experience, the phenomena that we are going to study.

FAW: Initially, some of the students, most of them juniors, were skeptical that baseball was the avenue to anything.

JAKE HANSEN (Student, NYU): To be completely honest, when I read the title of the course I thought, well, this sounds a little hokey, but, you know, I took one course with him. It was great. I’ll give this one a shot, but, you know, he really does make his argument well.

FAW: The students are personally approved by Sexton. They are assigned a long list of books and essays, some about religion, some about baseball.

SCOTT COHEN (Student, NYU): I feel I have a more open mind as to what religion can be. I no longer see it as something that needs a deity. It can be something that helps someone better themselves, something that gives them a reason to be moral or ethical.

HANSEN: He uses baseball as an example, but a point he’s been hitting again and again is that baseball is just one possible road to God. The fact that it’s not academic and not typically thought of as religious is what makes the point so effective, is that there is a way to find God and the ineffable, you know, the divine, in everyday life, and it can really be anything that takes you there.

FAW: What this devout Catholic is trying to do here is fuse lessons from the diamond to the underpinnings of faith.

SEXTON: The objective of the class was to get students to think about religion differently. So by using the study of religion and getting them to see it in the context of baseball caused them to go back to their thinking about religion in a different way, that maybe made it less dependent on dogma and more liturgical. Leading some of the students to the fact that they touched the transcendent plane in ways they hadn’t before, or at least understood it was possible to do it in unexpected places.

FAW: When he’s not running a major university, this is what John Sexton teaches: that this quintessential American game, just like Van Gogh or Beethoven, can sometimes give a glimpse of what matters most.

BASEBALL AND THE INEFFABLE

Read an excerpt from John Sexton’s “Baseball as a Road to God: Seeing beyond the Game” (Gotham Books, 2013):

At its best, a reflection upon one’s faith can reveal what Paul Tillich called “the ultimate concern,” that which motivates people day in and day out, perhaps leading to the complete emptying of self, as seen for example in a Buddhist monk.

Whatever its particular manifestation, faith is an affirmation of something that cannot be expressed, for it is rooted in another domain of knowledge, on that is beyond what is knowable in scientific terms. There is much that is known today, and even more that is unknown today but will be known (perhaps even hundreds of years from now). Faith—true faith—deals with neither the known nor the unknown but knowable. It deals with that which is unknowable in the scientific sense but which the believer knows with all of his or her being (the way, in a wonderful marriage, love is known). This is the domain of faith. Therein lies the most powerful connection to baseball, its rhythms and patterns, astonishing feats and mystical charm; it is not necessary to elevate baseball to the level of ultimate concern to notice that, for the true fan, there is sometimes a touching of the ineffable that displays the qualities of a religious experience in the profound space of faith.

As Ralph Waldo Emerson put it, “All I have seen teaches me to trust the Creator for all I have not seen.” That thought was echoed by William James: “The divine presence is known through experience. The turning to a higher plane is a distinct act of consciousness. It is not a vague, twilight or semi-conscious experience,” he wrote. “It is not a trance.”

And psychiatrist Emanuel Tanay, a Holocaust survivor, also tells us that faith can spur feelings of confidence and optimism. “As your faith is strengthened you will find that…things will flow as they will, and that you will flow with them, to your great delight and benefit.”

From “Baseball as a Road to God: Seeing beyond the Game” by John Sexton (Gotham Books, 2013)