SAUL GONZALEZ, correspondent: It’s these kinds of images that have defined Iraq over the past decade, as America’s 2003 invasion was followed by a long insurgency against U.S. forces. Brutal sectarian violence among Iraqis followed and continues to this day in the country.

At least 100,000 Iraqis have died in the conflicts. And fears of violence and religious persecution have led more than a million and a half Iraqis to flee their country, with most settling in other Middle Eastern nations.

Thousands of these Iraqi refugees have wound up on the very distant and unlikely shores of San Diego, California, a place better known for the tanned and toned southern California good life than its connection to turmoil in the Middle East.

(to Milheer El Anny and his wife Hebba): When did you get here, may I ask?

MILHEER EL ANNY: About 42 days ago.

GONZALEZ: You got to the United States only 42 days ago? 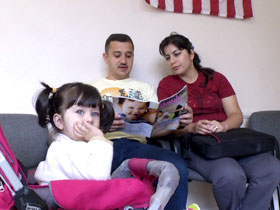 GONZALEZ: Iraqis Miheer El Anny, his wife Hebba, and young daughter Jumana are trying to adjust to their new life in the U.S. after leaving Iraq and then spending a year in Turkey as refugees.

EL ANNY: We left Iraq because there was a direct risk on our lives. It is very risky, especially for us because our lives are in danger. So, for the time being we can’t go back to Iraq.

GONZALEZ: We met the El Annys in the San Diego offices of Catholic Charities, a nonprofit group which helps new Iraqi refugees resettle in the community, regardless of their faith.

MIKE MCKAY: They are what we call the unintended consequences of the war.

GONZALEZ: Mike McKay is Catholic Charities’ Director of Refugee Services in San Diego. He says because of America’s long and controversial military involvement in Iraq, the U.S. has a moral obligation to help the Iraqis now here.

MCKAY: Just like we help the veterans who come home from the wars, and they have a lot of challenges, so also we have a responsibility and a need to help these folks as well. 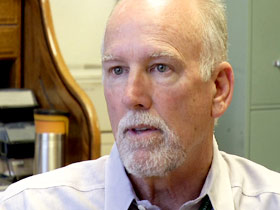 GONZALEZ: In the early years of the Iraq War, the United States only accepted a trickle of Iraqi refugees. But that changed in 2007 when resettlement restrictions were loosened.

In the years since, more than 64,000 Iraqi refugees have been allowed in to the United States, with thousands of them coming to the San Diego area.

That migration has transformed some communities, like El Cajon, where a quarter of it’s 100,000 residents are now Iraqis, and where on some streets it’s easy to feel like you’re in the Middle East.

For the Iraqis who come to the United States, they’ve traded the violence and desperation of their own country for the relative peace and prosperity of the United States. But for many it can be like traveling between two worlds and that creates its own problems.

MUHAMMED: My name is Muhammed, and I’ve been in the United States since 2009 as a refugee.

GONZALEZ: Muhammed is like many in the Iraqi expatriate community when he requests that we don’t reveal his identity. He fears it could put family members back home at risk, either from militants or criminal gangs. 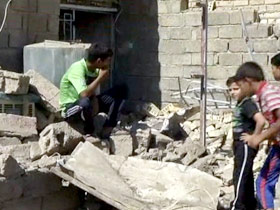 MUHAMMED: They kidnap one of your family, thinking that because you are living in America you are a millionaire or something and asking for a ransom. That happens many times.

GONZALEZ: Muhammed says he was forced to leave Iraq. He says just because he was an English teacher, militants thought he was working with the Americans. Many Iraqis who worked with the U.S. military or private contractors as translators have been killed.

MUHAMMED: They start targeting teachers, educated people. So we received a threat note to leave or you will be killed.

GONZALEZ: And why did so many Iraqis, like Muhammed, choose to come to San Diego? Well, many of them had family connections here because of an older, established Iraqi community that’s been in the city for years.

That’s especially true for Iraqi Christian Chaldeans, who have put down deep roots in San Diego.

Local Chaldean churches, along with mosques and groups like Catholic Charities and the International Rescue Committee offer aid and orientation to the Iraqi refugees.

INSTRUCTOR: …By using the three techniques at least. Apply online. What else? Networking. 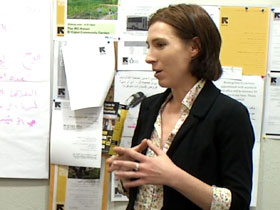 That help often comes in the form of classroom instruction, where the newly arrived Iraqis learn survival skills for everyday life in America.

Erica Bouris is a resettlement manager for the International Rescue Committee in San Diego.

ERICA BOURIS: We provide cultural orientation. We help with housing and, you know, making sure that kids are immunized, kids enroll in school, those are the kinds of things that we are doing with folks in the first couple of months.

GONZALEZ: Some institutions which try to help the refugees, such as San Diego’s most prominent Iraqi Christian church, acknowledge providing assistance has stretched resources. 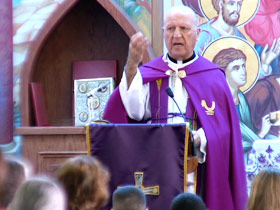 FATHER MICHAEL BAZZI: We used to have them coming to us a thousand, two thousand every year, three thousand every year, and lately, more than five thousand people. And I established here a committee to show them how to live as Americans here, and we have many committees that take them to the schools and to, you know, insert them into American society.

GONZALEZ: Although grateful to be here, many Iraqis complain that settling in the United States has been difficult, especially when it comes to jobs. According to Catholic Charities, only about a third of Iraqi refugees find employment during their first year in the United States. Anecdotally, the refugee agencies say long term unemployment or underemployment continues for most of the Iraqis. Muhammed blames the refugee resettlement process for many of the Iraqi community’s problems.

MUHAMMED: We didn’t get any orientation about life in America or even the law, so we were lost. It’s not about the person himself. It is about applications and system software that you have to fit in. It doesn’t matter what your life was. But for me no one can sit and talk to you. 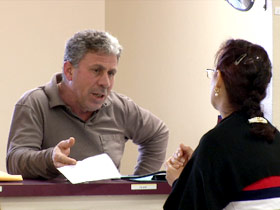 GONZALEZ: Mike McKay of Catholic Charities empathizes with the Iraqis.

MCKAY: They have very conflicted feelings. They’re grateful about being out of harm’s way and have a chance to start a new life and seek the American Dream. But at the same time, not unlike the Hebrew people who left the slavery of Egypt, when they got in the desert, they said, “Oh, Lord, Moses, why did you bring us here? Take us back. Life is too hard in the desert.”

GONZALEZ: For the El Annys, freshly arrived in this country, the choices and freedoms America offers is both confusing and exciting.

EL ANNY: These 42 days, it’s like introducing for a new world because the system here is different than the system in the Middle East, especially the option things. Here in the United States, everything, there are options.

HEBBA: There are many options.

EL ANNY: Yeah. Many options. Everything, there are options.

EL ANNY: Sometimes we feel fear. Yeah, sometimes. But, you know, with all the support we have, things will be fine, I think.

GONZALEZ: When we left Catholic Charities, the staff were preparing for new refugees from Iraq at the airport in the coming days.