BOB ABERNETHY, host: Amid the continuing investigation into the Boston Marathon bombing, President Obama this week spoke of the threat of self-radicalized individuals here in the US and the difficulty of identifying them. He said his counterterrorism team has discussed ways it can engage communities where such radicalization can occur. In recent years, American Muslim groups have launched their own efforts to combat extremism.

For more on this, I’m joined by our managing editor, Kim Lawton, and Haris Tarin. He directs the Washington office of the Muslim Public Affairs Council.

Haris, welcome. The president referred to self-radicalizing. What—how does that work, and what can the Muslim community do to prevent it? 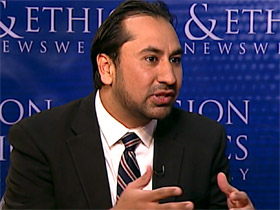 HARIS TARIN (Muslim Public Affairs Council): Well, the phenomenon of self-radicalization is where individuals who do not find a place in mainstream Muslim institutions, places like mosques and organizations, they don’t find a place for their fiery rhetoric, for their violent, extremist rhetoric, so they go online, and they listen to sermons, and they listen to individuals like Anwar al-Awlaki or Adam Gadahn or other folks who misinterpret the religion to give it a violent, violent ideology, and they fall prey to these individuals who are basically online predators, and they get influenced by these individuals to address their grievances through violence.

ABERNETHY: And then what can you do about it?

TARIN: I think what we can do, number one, is to ensure that there’s a counter-narrative, that there’s a narrative of life, of positivity, that even if you have a grievance or you have a disagreement on policy, whether domestic or international, you can address those policy grievances through civic and political engagement and change that— maybe not overnight, but eventually you have the power to change policy. 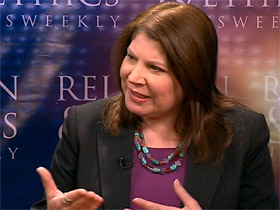 KIM LAWTON: I know the Muslim community has been trying to offer these kinds of counter-narratives. Has that just not worked, or what do you need to do differently in order to combat this online issue?

TARIN: Well, I think, you know, I said before, I think to overwhelming extent the American Muslim community has not fallen prey to this. It’s individuals who are radicalized online, but I think what needs to happen is that we need to ensure that we have a narrative that goes viral. A lot of these videos, they are very emotive. These sermons they use violence and gruesome images to tug at the emotion of young people. And so we also need to ensure that when we put out the counter-narrative it’s as savvy, it goes as viral and addresses the same issues and that we’re not afraid to address some of the same policy grievances that they address, but to make sure that the outcome is positive and not negative.

LAWTON: And how do you deal with the perception that many outsiders have that the more religious someone, a Muslim, gets, the more prone he or she is to being violent or being an extremist?

TARIN: Well, I think that notion, fortunately, is false. There’s a notion that the more religious you get it leads to acts of violence. The studies have shown that when people go through rigorous religious training and understanding, they’re less prone to violence, but that people who skip that religious understanding part and have an awakening and then go straight to politics, that’s where they become more prone to violence and twisted ideologies and perverted interpretations of the religion.

ABERNETHY: Is there a special role here for young people? I mean, the perpetrators are young. Does that invite, then, or say that the people who can best correct that are young people?

TARIN: The first thing you have to understand is a lot of young American Muslims, they deal with everything else that all young Americans are dealing with—college tuition, jobs, but there is a place for them to ensure that their peers on college campuses and youth groups are having a conversation that’s positive, that when they see a negative conversation that they step in, and they interfere and ensure that they move the conversation towards a more positive aspect.

ABERNETHY: O.K. Haris Tarin of the Muslim Public Affairs Council and Kim Lawton, many thanks to you both.