JOHN WOOD: We are, you know, not a religious organization. Our religion is literacy, our religion is gender equality and education.

LUCKY SEVERSON, correspondent: Here is John Wood spreading his religion in Vietnam, in Africa, in India. It was only 15 years ago that Wood took a hike that changed his life and impacted millions of others. He was a Microsoft executive trekking in Nepal when a headmaster invited him to visit his run-down, dilapidated, overcrowded school.

WOOD: And we went to this school’s library, and it was a library in name only. They didn’t have any books for the children. And I asked the headmaster why, and he said we’re too poor to afford books. And I said, well, that must make your job very difficult as a headmaster and he said well actually in Nepal we’re too poor to afford education for our children but until we have education we’re always going to remain poor.

SEVERSON: This came as a shock to Wood, who as a kid loved to read more than anything. 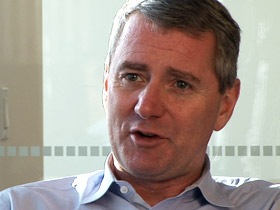 WOOD: I loved to read. I’ve loved to read from the day I could first decode words. And when I was growing up, if I did something well, you know, I surprised my mom by washing the dishes, and I was given anything I wanted as a reward, I would always say I want to stay up late and read tonight.

SEVERSON: Wood promised the headmaster that he would return with books for the school’s library. He asked his friends and his parents for help and they did, big time—more books than his yak could carry. But he kept his promise.

WOOD: I was just in awe of how excited those kids were when we delivered the books. And then to see the kids then running with the book, sitting under a tree, and you see three kids all with their eyes wide open looking at a picture of men walking on the moon, looking at photographs of African wild life, kids in a land-locked nation who had never seen sharks or whales.

SEVERSON: Wood says he’s inspired by Buddhism and had been reading the Dalai Lama’s teaching that the greatest happiness comes from giving something to someone in need. 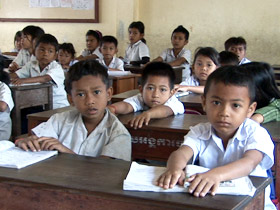 WOOD: I thought, what am I doing patting myself on the back? That’s one library in a world that needs tens of thousands of libraries. That’s 450 children helped in a world where 800 million people are illiterate. That’s almost a billion people who can’t read or write, and then people remain, you know, confused about why do the poor remain poor. Well, if you don’t get an education, if you can’t read or write, the odds are stacked against you.

SEVERSON: So Wood decided to leave his lucrative job at Microsoft for the low-paying life of a book peddler, although that may be an oversimplification of what his nonprofit organization does. It’s called Room to Read and they now have libraries and schools and millions of books in 10 countries, including Cambodia.

(to Kahn Kall): Room to Read has been doing very well in Cambodia?

KAHN KALL: I would not hesitating to say yes. 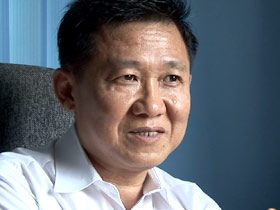 SEVERSON: Kahn Kall is the head of Room to Read in Cambodia. He’s happy because the Cambodian government has given its rare blessing to the Room to Read mission. This is the country that barely survived the terror reign of the Khmer Rouge, in which education was completely obliterated. It was so bad even after the Khmer Rouge that the current provincial education minister says as a school teacher he had to scrounge for a piece of paper.

MR. UNG SIREIDY: No chair, no table, no clothes for children, no books. Sometimes I collect the paper from the road to make my lesson plan.

SEVERSON: Even today in many schools in Cambodia, reading, especially for pleasure is often frowned upon.

KAHN KALL: You only allowed to read the book which is related to what you learn. Any other books they always say it’s not useful. And you know what I did, I go to the bookstore and then I rented a book, I had to hide it behind my back, because otherwise my father when he saw I read the book that were different, I read the story, I read everything, he would spank.

SEVERSON: There are about 6,500 primary and secondary public schools in Cambodia. Until 10 years ago, about the only books found in these schools were official, authorized textbooks, one per grade. Now more 1,500 of these schools have their very own library, like the one behind me, provided by Room to Read with the blessings of the Cambodian government. Now, in Phnom Penh, hot off the press, books with pictures created and published by Room to Read. 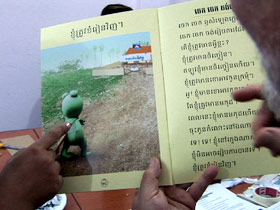 WOOD: If you look around the developing world, when you bring bright, colorful children’s books into a child’s life, there’s just something instinctive, inherent inside them where they just get it immediately. Their faces light up.

SEVERSON: (speaking to young girl through interpreter) How many books have you read?

SEVERSON: How about your girlfriend?

SEVERSON: These bright, colorful books were commissioned by Room to Read and created by local Cambodian artists, always with a message. 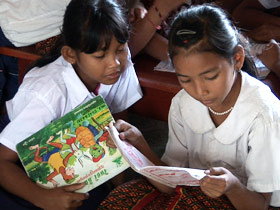 SEVERSON: Ratana says this one is meant to discourage young girls from leaping into marriage.

RATANA: The message is that she is too young. She needs to learn more, so she cannot get married when she is very young.

WOOD: If you’re working with boys and girls you want to make sure you don’t have gender stereotypes, right? So sometimes in books you’ll see the boys are out playing soccer while the girl is inside, you know, washing the dishes. Well, is that really the lesson we want to teach to kids or do you want to reverse that and make sure that you’re having good gender roles in the books.

SEVERSON: Room to Read pays special attention to young girls because, Wood says, that’s where the need is the greatest. 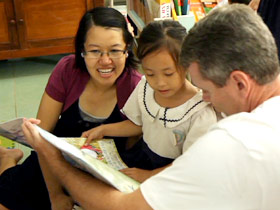 SEVERSON: Now Room to Read has a program that guarantees girls an education all the way through high school, including, when necessary, room and board. Borin is one of the organization’s few full-time employees in Cambodia.

SREY BORIN: We provide the girls with something like school uniforms, the shoes. And we provide them with transportation, let’s say, bicycle for those who live far away from the school.

SEVERSON: So far 20,000 girls worldwide have enrolled. These girls are old enough to be in college, but this was their first opportunity to go to high school.

FIRST STUDENT: My father and my mother, when I study, know what,he very happy.

FIRST STUDENT: Yeah, with you, with me. 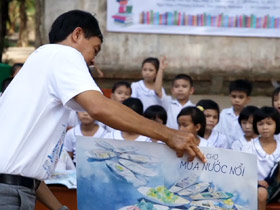 SEVERSON: And what about your parents, are they happy?

SECOND STUDENT: Ah, the same, too.

SEVERSON: Room to Read now has an annual budget of $44 million, funding that comes from individuals, foundations, and corporations. Wood says one reason Room to Read has been so successful in the 12 years since it was founded is because local communities are also required to contribute.

WOOD: In Room to Read we honor the communities we work with by requiring them to co-invest, right? They can give land, they can give labor. You know, I’ve had parents who will point out, they’ll point to the building and they’ll say I painted that building. You know, there’s an old adage you can’t help people if they don’t want to help themselves.

SEVERSON: As philanthropic organizations go, few have grown as big and fast as Room To Read.

WOOD: Somebody once just said to me you’re no longer going to be rich monetarily but you’ll be rich in books, you’ll be rich in experiences and you’ll be rich in just absolute happiness. In a certain sense it’s like being a millionaire but you’re counting your millions in terms of the number of kids and books.

SEVERSON: Room to Read has now constructed 15,000 libraries, over 1,500 schools and distributed over 12 million books in 10 countries.