LUCKY SEVERSON, correspondent: Head Start kids, three and four years old in Baltimore. They’re singing now, but will they be singing when the much-ballyhooed sequestration fully kicks in? Come July this particular Head Start program will lose over 100 thousand dollars in government funding.

ERIC STEGMAN: It’s an enormous setback and I think a lot of what we’re seeing now is that sequestration is real.

SEVERSON: Eric Stegman is an analyst for the Center For American Progress and an expert on sequestration and poverty.

STEGMAN: You’ve got so many different cuts hitting families from so many different directions it’s going to be really hard for families to stay on their feet especially if they have trouble finding employment and other things they need to do to support their family.

SEVERSON: The sequestration is the law approved by Congress and the president to cut 85 billion dollars out of federal spending. The cuts will affect only discretionary spending, like defense, government agencies and a lot of programs that will impact low income families in particular. It’s the cities that will bear the brunt of the cuts and few big cities will be harder hit than Baltimore, Maryland. 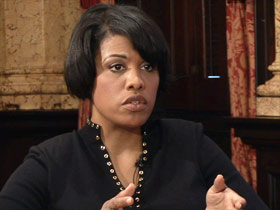 MAYOR STEPHANIE ROLLINS BLAKE: All of the things that are put in place to hold up the families are, you know, slowly one by one being pulled out.

MAYOR BLAKE: Every time we talk about a cut you’re talking about many people who don’t have an expensive lobby that is in Washington, DC. It’s an economic justice issue, a social justice issue, this is about what’s right for our country, and that we are a country that doesn’t just pretend to care about the vulnerable but that actually cares enough to do what’s right.

SEVERSON: Baltimore is by no means the poorest big city in the U.S. but it’s poorer than many. Bill McCarthy is the Executive Director of Catholic Charities in Maryland. 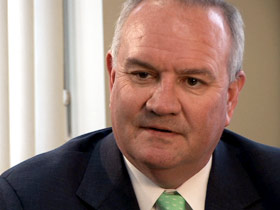 SEVERSON: There are a number of churches trying to help the poor in Maryland, but by far the largest aid organization is Catholic Charities with over 2000 employees and 15,000 volunteers like these working here at Our Daily Bread pantry that will serve over 300,000 meals this year. When paychecks run out, the line is a block long.

MAYOR BLAKE: Many of these people are the working poor. I mean coming out of the great recession has been tremendously difficult because you have people who had once been employed and many of those people found themselves out, you know trying to figure out what to do.

STEGMAN: Throughout the year, the average recipient of long term unemployment insurance is going to see their checks cut through the year by about $450 dollars and when you’re already living on very little and trying to find a job, you do end up going to the food banks and other places to get assistance. 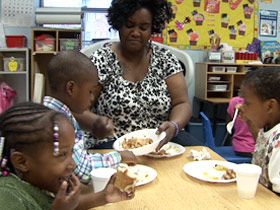 SEVERSON: The number of people in Baltimore waiting for public housing, which faces huge cuts, is already 35,000. Education for poor and disadvantaged kids will be cut several billion. Funding for public safety is on the chopping block.

MAYOR BLAKE: That would be devastating, you know, as we are finding the resources to become a safer city. We need more resources not less.

SEVERSON: Nationwide over 600,000 women and children will be cut from the special supplemental nutrition program. These are only a few of the hits on the poor. Cuts also for Meals on Wheels.

STEGMAN: For most of the recipients, this is the only food that they get. And I think another thing that people don’t understand is that Meals on Wheels is a program for very hungry low income seniors and people with disabilities.

SEVERSON: For people like Michelle Rositzky sequestration is like a train barreling down the track straight at her. 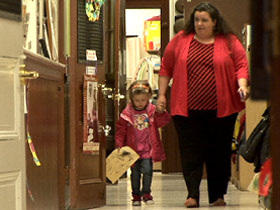 MICHELLE ROSITZKY: Ever since we heard about it, it’s been weighing on our mind and worried about it every single day, wake up and find out one day we won’t be able to bring our kids to Head Start and we have to worry about everything else.

SEVERSON: Each day she picks up her little girl Natalie from Head Start about 2 in the afternoon which allows both Michelle and her husband to work. Without Head Start, she would have to stay home. Funding for day care help for low income moms is also targeted.

MARY GUNNING: In the morning, when the children, some of the children when they come in, they’re very hungry. They will eat several bowls of cereal. I mean for a three-year old that’s fairly unusual. I mean they depend on us for the food. 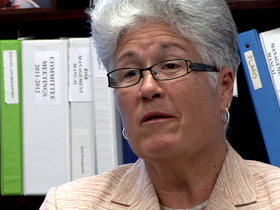 SEVERSON: Mary Gunning is the director of St. Jerome’s Head Start program where Michelle brings Natalie. She’s already reduced her staff hours and other programs to meet the sequestration cuts.

GUNNING: I don’t think people understand already that, you know, you talk about being down to the bone, well we are, whatever is inside the marrow, that’s where we are. I mean we have made massive cuts in our program already while trying to still be able to retain services for families and children.

SEVERSON: Studies have shown that a greater percentage of kids who go through Head Start go on to college.

MAYOR BLAKE: The cuts that we’re making to the most vulnerable will have long term personal impact but they’ll have extremely long term economic impact if we don’t insure that someone graduates from high school then we should start to prepare for the likelihood of them being in the justice system and that’s far more expensive.

SEVERSON: When sequestration first became law, the intent was it could not be tampered with. That changed when air traffic controllers were forced to take a day off and there were flight delays, passenger complaints and Congress was just about to board airplanes to go home for recess. Suddenly, in a rare display of bipartisanship, Congress fixed the delays. 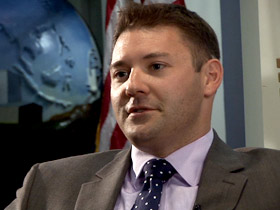 MAYOR BLAKE: It seems almost trivial you know that that would rise to the level of requiring an emergency session while families in need, it seems like their voices go unheard.

McCARTHY: Our budget is a moral document, it sets those priorities in terms of what we value as a society as necessary and important. Whether it’s a project in the Defense Department or putting our airline traffic controllers back to work at the same schedule without considering the poor and those that are marginalized is frankly immoral and very concerning.

SEVERSON: Congress is now considering the possibility of tinkering with the defense budget so the sequestration won’t hurt critical Pentagon programs. There has been very little debate about easing the cuts on programs that are critical to the poor.