DEBORAH POTTER, correspondent: The Boy Scouts of America has long argued that homosexuality is incompatible with its basic principles. As a private organization, its right to exclude gays was upheld by the Supreme Court a decade ago. But the issue has remained divisive.

Pascal Tessier, for one, hopes the scouts will lift the ban.

PASCAL TESSIER: I’ve had wonderful experiences with all the other boys and learning all my life skills and becoming a leader and all that. 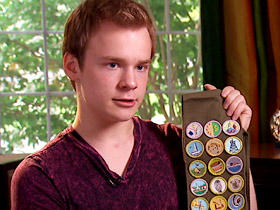 POTTER: Pascal is now 16 and just a few steps away from becoming an Eagle Scout, the highest rank in scouting. He’s also openly gay.

TESSIER: Right now I’m on the line. I could get a letter any day saying I’m not part of scouts anymore. I’m kicked out. I would…that’s it, that’s the end of it. That’s the end of ten years of scouting.

POTTER: The policy change proposed by the Boy Scouts of America would affect more than two-and-a-half million boys. Most of them—70 percent—belong to troops that are sponsored by religious organizations. And the reaction from faith-based groups has been mixed. The Mormon Church, the largest single sponsor of scout groups, is on record as saying that homosexual acts are sinful. But it surprised many by giving its blessing to the Boy Scouts’ proposal just weeks before the vote. United Methodist churches, like Metropolitan Memorial in Washington, DC, supported the change from the start. Senior Pastor Charles Parker is a former scout and father of a seven-year-old boy. 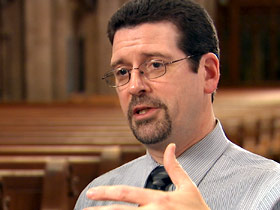 CHARLES PARKER (Senior Pastor, Metropolitan Memorial United Methodist Church): I think the scouts are actually wrestling with the same thing the church is wrestling with in terms of an erosion of membership over the years, and if they really want to communicate to a new generation of folks, my son is not going to understand bigotry towards homosexuals and wouldn’t be part of a group that was bigoted. So if we want a new generation of scouts, we’ve got to do this.

POTTER: Opponents of the proposal to accept gay scouts say it flies in the face of a basic tenet of scouting: the oath boys take to be “morally straight.”

CHRISTIAN SACRA (Eagle Scout) (from “Stand With the Scouts” video): Changing the scout policy on homosexuality really brings up concerns of making sure the scouts live by the scout oath and law, when really we’re supporting an idea that goes against it. 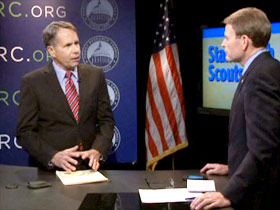 PASTOR ROBERT HALL (Calvary Chapel Rio Rancho, NM) (from “Stand With the Scouts” video): The problem is that we as churches are setting a moral code in people’s lives, as we’re the conscience of the nation. And we have all our scout volunteers sign our statement of faith. And it’s within that environment we’re all in agreement of what we believe, that we’re training our boys and teaching them to honor God and to be, as you say, “morally straight.” And that would be incompatible with this change in scouting. We could not continue our relationship with them.

POTTER: To Pascal Tessier, the concerns makes no sense.

TESSIER: Sexuality does not have a place in scouts. It’s about having good morals and be able to be a good person. So I think that bringing sexuality into it doesn’t have any effect. Your sexuality doesn’t affect your morals.

POTTER: And some supporters of admitting gay scouts say the policy change doesn’t go far enough. The Boy Scouts have drawn the line at 18, still refusing to accept gay adults as scout leaders.

PARKER: I think the issue of trying to intellectually justify that being gay and being a scout is fine, but being gay and being a leader is not fine is an odd one, because on some level you’re training scouts to be leaders, and so if you’re training gay scouts to be presumably gay leaders, but then you don’t want gay leaders in the scouts, that’s sort of an odd message to send.

POTTER: Some troops undoubtedly will leave the Boy Scouts of America if the new policy is approved. But the organization faces a possible economic backlash if it retains the ban. Measures are under review in several states to withhold funding or tax breaks from the scouts unless the ban is lifted.

Boy Scouts reciting Scout Benediction: “May the great Scout Master of all great scouts be with us until we meet again.”