LUCKY SEVERSON, correspondent: There’s a struggle going on inside Thailand. It’s between two powerful influences. One side can be found in places like this; the other in crowded spaces like this. For now it seems that one side is falling behind.

This is Professor John Butt, senior advisor to the Institute of Religion at Payap University in Chiang Mai.

PROF. JOHN BUTT: It’s a real clash with modernity, with social change, and it’s been very intense. The changes that took place in America and in Europe have been extended over a couple of centuries; here it’s been a couple of decades.

SEVERSON: This is a country where almost 95 percent of the population is Buddhist, where the constitution mandates that the king be a Buddhist, and where there are temples almost everywhere.

PROF. BUTT: I think probably this is one of the central if not the central Buddhist country in the world. 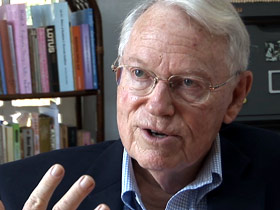 SEVERSON: It’s a country that has recently seen a remarkable rise in economic prosperity. There was a time not that long ago when it would have been difficult to find a mall, let alone one so crowded. The roads would have been clogged with motor scooters, and the fancy cars belonged only to diplomats and the very rich. Not anymore. The Thais have embraced consumerism with gusto.

This is An Jang Sang, professor emeritus at Chiang Mai University.

AN JANG SANG: Some of them may be interested in materialism, consumerism, but deep down in their heart they are still Buddhists.

SEVERSON: But he agrees they’re not going to the temples, also known as wats, as much as they once did.

PROF. BUTT: In the past the wat was not just the religious center, it was the life center of the village community. The social life took place there, counseling, respect, authority for the monks. That’s, I think, decreased tremendously.

SEVERSON: And not as many are going to the Buddha to offer their prayerful good wishes for all living things. Some are giving more in donations, but Phra Boonchuey, the assistant abbot at this large temple, says too many are just donating to buy good karma. 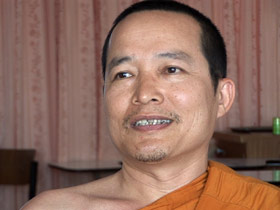 PHRA BOONCHUEY: Because now they are coming to the temple just only to offer the offering in order to please, you know, their life for their own benefit.

SEVERSON: Phra BoonChuey is on a mission to get Thai Buddhism back on track.

PHRA BOONCHUEY: And so we have to do many things, you know, to bring people, you know, back to the religion.

SEVERSON: That would include bringing back the monks themselves who have been disappearing. In the past, almost every young man would become a monk, leading a monastic life, some for a few months, some for a lifetime. But in the last 30 years it is estimated that the number of monks has fallen by more than half. Mr. Vinai, our tuk-tuk driver, served as a monk for over a year as a young man.

SEVERSON: Do you think every young man should be a monk? 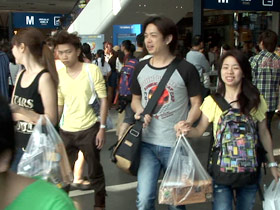 SEVERSON: He says not every young man should be a monk because some care more about shopping.

SEVERSON: Were they monks?

It’s about 5:30 in the morning, and the first monks are showing up to collect alms, their food for the whole day. Sometimes there’s only one meal a day, often followed by some sort of community service, and then there are the hours of chanting, study, and meditation. It’s not an easy life. Professor Butt says he once asked the young men in his class how many had been ordained.

PROF. BUTT: If I had asked that question a hundred years ago, I would have gotten close to a 100 percent yes, that they had ordained as a novice, maybe a short period of time, but they had done so. I went five years before I got one positive response, who had ordained.

SEVERSON: One reason for that might be the Thais have been practicing family planning, and if there is only one boy in the family, and the choice is school, making money, or ordination… 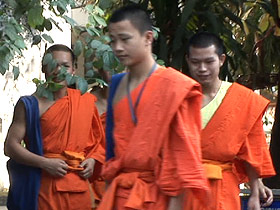 PRHA BOONCHUEY: You may not want him to be a novice or to get ordination.

MR. VINAI: Not whiskey, not beer. 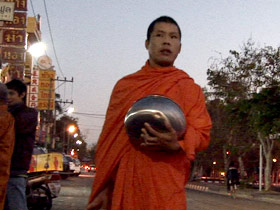 SEVERSON: It’s not that there has been an epidemic of scandalous behavior, but what there is seems to find its way into the media. Justin McDaniel, the chairman of the department of religious studies at the University of Pennsylvania, was once a monk himself in Thailand.

JUSTIN MCDANIEL: It has a big impact in the press. I think it also has a big impact that if somebody was on the fence about being a monk or nun, that this is kind of relatively a legitimate excuse you could give to your mom for not doing it: well, look at the way monks act.

SEVERSON: Professor McDaniel argues that Thai Buddhism itself is not in decline, that it is gaining considerable traction in the Western world, and that the Thai people themselves are debating it more, which he says is a good thing. He skeptical that there really is a crisis. 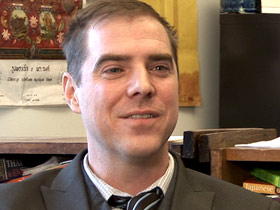 SEVERSON: He would find some disagreement here in Chiang Mai. Phra Boonchuey, for instance, thinks monks need to be taught more critical thinking instead of just memorization, and that the benefits of meditation need to be emphasized more. He wants Buddhists to get back to their basic precepts, such as abstaining from killing, stealing, sexual misconduct, lying, and drinking alcohol. He would also counsel them to consume only what they need and to avoid the trappings of materialism.

PHRA BOONCHUEY: Think before [you] consume.

SEVERSON: There is a branch of Buddhism that’s flourishing. It’s called Dhammakaya. One way to explain Dhammakaya is that it is to Buddhism what the prosperity gospel is to Christianity. In other words the traditional value of selflessness has been replaced with “bigger is better.” The more you give, the more you get. Professor Butt says in some ways consumerism is becoming a religion of its own.

PROF. BUTT: This is the most pervasive and maybe becoming deeply rooted and growing the fastest of any religion in Thailand, and it’s consumerism. This is the way that one identifies one’s life, by what you own. The old thing was “I think, therefore I am.” Now it’s “I buy, therefore I am.”

PROF. BUTT: We’re living in a new world, and religion is a response to life, to what it means to be human, and when that changes, as I said earlier, religion has to change too or it dies. It’s put in a museum.

SEVERSON: No one is suggesting Thai Buddhism is heading for a museum, but many agree that it might need some new packaging.