JUDY VALENTE, correspondent: He is one of the best known priests in America, a respected sociologist, researcher, and commentator, and author of dozens of best-selling novels. Father John Cusick has known Father Greeley for forty years.

REV. JOHN CUSICK: When the history of the American Catholic Church is written in America, I don’t know if you’re going to find a more significant name or a more impacting name on church than Andrew Greeley.

VALENTE: He was one of the first priests to criticize the Church’s position on birth control. He called for better preaching from the pulpit, a greater outreach to young people, and greater humility among the clergy. He promoted a more active role for lay people. Eileen Durkin is Greeley’s niece.

EILEEN DURKIN: He would write and write and write, and it was a part of his life. It couldn’t be separated from him. It wasn’t a chore for him. It just flowed out of him. Many people were touched by his stories and by his image of God as a God of love and a God of compassion and a God of forgiveness and a God especially of passion. 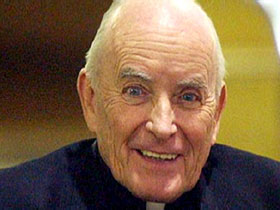 VALENTE: In November 2008, Father Greeley stepped out of a taxi in this Chicago suburb after a speaking engagement. His coat caught in the door, and as the taxi pulled away he was thrown to the pavement and suffered a traumatic brain injury. The prolific author who had written on so many subjects would write no more.

DURKIN: He’s suffering. Anyone who has had a traumatic brain injury to the extent that my uncle has, anyone who is a vibrant, intelligent, brilliant person who is now reduced to 24-hour care is suffering.

VALENTE: Father James Martin is an editor at the national Catholic magazine America.

REV. JAMES MARTIN, SJ: The mystery of suffering really does remain a mystery. There is no satisfactory answer to the question. It has bedeviled theologians and saints and scholars over millennia.

CUSICK: His attention span is certainly not what it used to be. He’s very slow. I mean, I think medical people have said it takes him a lot longer to process things.

DURKIN: Seeing his suffering has not necessarily affected my faith, because I know of his faith. For 80 years up until his accident I observed his faith, and I certainly heard about his faith because he shared so much of it and wrote about so much of it. 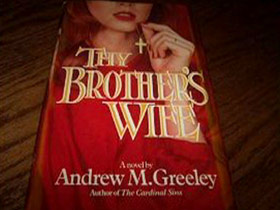 VALENTE: Father Greeley’s steamy novels won him both fans and critics. He wasn’t afraid to depict the sexual side of priests in his fiction and often included provocative sex scenes.

DURKIN: He would say all the other things he did as a sociologist, as a novelist, as a commentator were just his way of being a priest.

CUSICK: He would always stir things up, and people would be yelling and screaming and saying, how can he say that? How could he write that? And ten years later they’re saying it and they’re writing it.

DURKIN: Certainly the whole sexual abuse crisis in the Church—he was writing about that and identifying that long before it came out in most of the press in America.

VALENTE: Father Greeley warned of clergy sex abuse on national TV nearly a decade before the scope of the scandal became known.

Andrew Greeley on the Phil Donahue Show in 1993: I don’t think the Vatican cares. I mean they recently ordered the bishop of Pittsburgh to reassign a priest he had removed because he was a child molester, and so the Vatican doesn’t get it. 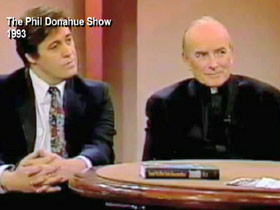 VALENTE: He has said that one of the church’s biggest problems is the status of women.

Andrew Greeley in 2002: The church just has not been able to cope with the demands for fairness and equality from women, so they’re very angry. For a long time, the bishops could console themselves, and I think some still do, that these are just your radical feminists. But the radical feminists include their sisters and their nieces and their mothers and all the women in their lives. They just don’t like the way the Church treats them.

CUSICK: When push came to shove, he said I’m not leaving and you can’t throw me out, and that was typical Greeley in his prime.

VALENTE: At a Mass celebrating his 50th anniversary [2004] in the priesthood, Greeley, who said he had wanted to be a priest ever since the second grade, reflected on the controversies he had sparked. 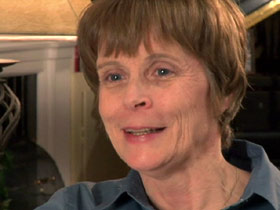 VALENTE: After the accident family and friends wondered, would he ever again be able to say the Mass, which meant so much to him?

DURKIN: He has always written about the centrality of the Eucharist in the Catholic faith. We’ve reached out to his priest friends and tried to make arrangements for them to come to his home and to celebrate Mass with him.

VALENTE: Last year, with his family around him, Greeley helped celebrate Easter Mass at the home of his niece, Eileen.

Cusick presiding at Mass with Greeley: In the name of the Father…

CUSICK: I’m sad because such a brilliant mind and such a voice in the Catholic Church has been silenced by an accident. 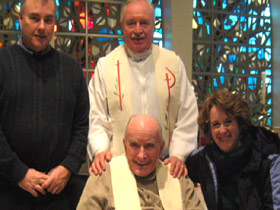 MARTIN: When we suffer we are often made more vulnerable, and in our vulnerability God can break in more. But, you know, it’s up to us whether or not we accept those invitations to new ways of encountering God. But certainly Andrew Greeley is a deeply spiritual person, and I’m sure he is finding God in new ways in this terrible experience.

DURKIN: Does he have moments of grace, times when he flourishes? Yes, definitely, when he interacts with his family and with his friends, when he is still able to be a priest.

Cusick at Mass with Greeley: By the Spirit that is within us, grant this through our Lord Jesus Christ…

DURKIN: He is disabled, but he has been a witness to us in his attempts to celebrate the Mass. He is communicating in ways that have always been his priestly function.

Cusick at Mass: Can you bless them now?

Presiding at Mass: The Lord be with you.

Response: And also with you.

For Religion & Ethics NewsWeekly, this is Judy Valente in Chicago.

Despite having sustained a serious head injury some years ago, Father Andrew Greeley, who died on May 29, 2013, was a priest to the end. “We know he is blessed and he’s blessing us,” said Greeley’s niece, Eileen Durkin.