FRED DE SAM LAZARO, correspondent: In an ancient, crowded land with wide religious diversity, Judaism has a tiny footprint. In New Delhi, it’s in this quiet enclave. A small group of worshipers gathers here every Friday, a mix of foreigners and Indians. In India’s ancient religious mosaic, Judaism is a newcomer. Its roots go back only two millennia.

EZEKIAL MALEKAR (Judah Hyam Synagogue): When Israel, the oldest Jewish community, landed, they were shipwrecked, and they came to India about 2,000 years ago.

DE SAM LAZARO: There were at least two subsequent mini-waves that brought Jews to India: people fleeing the Inquisition and people who came during British colonial days as traders. There were perhaps 30,000 Jews across the country at one time, but many moved to Israel after its formation in 1948. 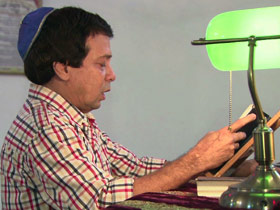 MALEKAR: Now we have only 5,000 Jews all over India, and in Delhi we have just 5, 6 Indian-Jewish families. We are like a drop in the ocean.

DE SAM LAZARO: Ezekiel Malekar is the keeper of Delhi’s tiny synagogue, built in 1956 on land donated by the Indian government. A lawyer and retired civil servant, he’s not an ordained rabbi, but for three decades Malekar has volunteered to lead this congregation, reconciling its ancient rituals and traditions with the practical modern reality.

MALEKAR: In order to read this portion of the Torah you require a quorum of 10 men, what we call in Hebrew minyan, so here we take into consideration the presence of women also. Some people don’t like it, especially those who are very Orthodox when they come to the synagogue. But I said that we are such a small community that if I have these practices I won’t be able to conduct the services in the synagogue.

DE SAM LAZARO: The majority of India’s remaining Jews live in the commercial capital, Mumbai. It was in this city during the 2008 terrorist attacks that six people were killed at a Jewish community center that mainly served Israelis and Western visitors and businesspeople. Since then, the Delhi synagogue has also come under 24-hour protection from the Indian government—the first time Jews here have ever faced the specter of violence. 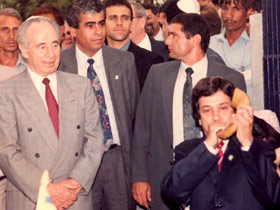 MALEKAR: Jews have been living in India for the last 2000 years and without anti-Semitism and persecution, and therefore I always say that India is our motherland. I am an Indian first and Jew second. When Mr. Shimon Peres came here…

MALEKAR: The president of Israel. I was asked by the BBC media that what is your feeling about Israel and India? And I said that Israel is in my heart, but India is in my blood.

DE SAM LAZARO: But those who call themselves Indian and Jewish are fewer and fewer. One of Malekar’s sad tasks is to tend the cemetery, whose census now exceeds the congregation in the synagogue next door.

MALEKAR: This is the last place, where we go to the divine abode.

DE SAM LAZARO: On a happier note, Malekar will soon preside over his daughter Shulamit’s wedding, which will be a historic event in Delhi’s Jewish community.

MALEKAR: I don’t remember even after 1956 there has been a single wedding in the synagogue.

DE SAM LAZARO: At 66, Malekar will finally witness a marriage here between two Indian Jews, leaving only the worry about who from the handful of young congregants might be willing to take over from him.

For Religion & Ethics NewsWeekly, this is Fred de Sam Lazaro in New Delhi.