KIM LAWTON, correspondent: The case involves Cheryl Perich, a fourth-grade teacher at a Lutheran Church Missouri-Synod school in Michigan who mainly taught secular subjects, but also taught religion and led prayers. She took a leave of absence to get treatment for a sleep disorder. When the school was reluctant to let her return, she threatened to sue for violation of the Americans With Disabilities Act.

CHERYL PERICH: I can’t fathom how the Constitution would be interpreted in such a way as to deny me my civil rights as an elementary school teacher. I sure hope the Court agrees.

LAWTON: Lawyers for the school said Perich was considered a commissioned minister, and therefore she was covered by a legal doctrine known as the ministerial exception. That exception says religious groups don’t have to follow anti-discrimination laws in employment decisions about their leaders.

DOUGLAS LAYCOCK (University of Virginia School of Law): Disputes between ministers and their churches, if anything is covered by separation of church and state this is it. These cases do not belong in the civil courts.

LAWTON: For almost 40 years, lower courts have granted houses of worship and other religious institutions this exception. The idea is that under the First Amendment’s religious freedom guarantees, courts should not get involved in a religious institution’s decisions about hiring and firing its ministers. But how far should that exception extend? 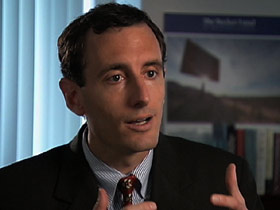 Luke Goodrich is deputy national litigation director at the Becket Fund for Religious Liberty, which is representing the church and school in this case.

LAWTON: But some argue that the ministerial exception has been taken too far. Barry Lynn is executive director of Americans United for Separation of Church and State. He’s also both a lawyer and a United Church of Christ minister.

BARRY LYNN (Americans United for Separation of Church and State): Unfortunately, I think some religious organizations use this idea of a ministerial exception as a pretext to dismiss people on the basis of their color, their gender, their racial background, or their disability, and that really runs counter to every principle of, I think, morality and every principle of our civil rights system.

LAWTON: Goodrich says the larger religious liberty principle is too important to have juries deciding what was a religious motive for hiring or firing.

GOODRICH: Even if a church may not be acting, you know, may have mixed motives, it is important to allow the church to decide, because you have a lot of cases where there aren’t mixed motives, and the church makes a purely religious decision. But if you allow juries and courts to second-guess that, churches will not be free to make decisions based on their religious beliefs. 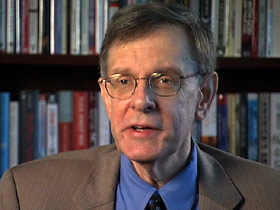 LYNN: Courts are good at determining whether something is a sincerely held belief. We do it with conscientious objectors to war. This is just another red herring added by some religious groups that frankly want, if not themselves, others to be able to discriminate on any basis.

LAWTON: One of the most difficult questions is determining who is a minister. Is it only those who have been ordained? What about ministers of music or online ministers or teachers at religious schools?

LYNN: Unfortunately, judge-made law—some very strange judge-made law—suggests that this is a very broad idea, that it encompasses virtually all of the employees of a ministry, of a religious body, if the religious body just says you are all really ministers and thereby precludes them from filing civil rights lawsuits.

LAWTON: Many religious groups say it shouldn’t be up to the government to decide what duties are ministerial in nature.

GOODRICH: The Becket Fund’s position in this case is that the court should look at whether the employee performs important religious functions, and that includes teaching religion, leading prayer, and leading worship. If the person at issue is responsible for proclaiming the church’s message to the rest of the world, that would bring them within the ministerial exception, because the church needs to be able to choose who’s going to carry its message to the rest of the world.

LAWTON: The Obama administration is taking a hard line in the case. To the dismay of many religious groups, the Justice Department urged the Court to reject the ministerial exception altogether, saying the First Amendment doesn’t offer such special protection. 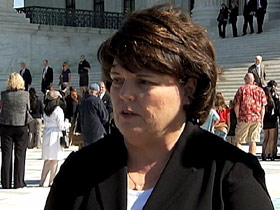 LAWTON: If the High Court keeps a ministerial exception, the Justice Department argued that it should be limited to employees who perform “exclusively religious functions.” Religious groups say that definition is unworkable because virtually all ministers do a variety of tasks that on their surface may not appear to be religious.

LAWTON: Lynn supports keeping a ministerial exception but says it should be narrowly defined.

LAWTON: On the other side, nearly a hundred diverse religious groups filed briefs supporting the church’s right to choose its own ministers.

RABBI DAVID SAPERSTEIN (Religious Action Center of Reform Judaism): It seems all of us, even those of us who are deeply committed to civil rights, to protection of disability rights, to preventing retaliation for claims believe strongly that church autonomy and the ministerial exception are indispensable to religious freedom.

LAWTON: The US Conference of Catholic Bishops, the Church of Jesus Christ of Latter-day Saints, the Episcopal Presiding Bishop, and the Union of Orthodox Jewish Congregations joined together on one of the briefs. They said “when the dispute is between the church and the church member who seeks to serve in ministry, there is no occasion—no justification whatsoever—for the state to become involved.”

Lower courts have been wrestling over the ministerial exception for decades, but this is the first time the Supreme Court has taken up the issue. A decision is expected by early next year.