BOB ABERNETHY, anchor: This week of Capitol Hill testimony and widespread debate over the government’s massive surveillance of phone calls and internet activity. One key question: how to find the right balance between protecting citizens’ privacy and assuring national security.

We want to talk about that with Michael Kessler, an ethicist, a legal scholar and associate director of the Berkley Center for Religion, Peace and World Affairs at Georgetown University.

Professor Kessler, welcome. So how do we get the right balance between privacy on the one hand and security on the other? 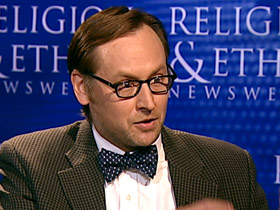 MICHAEL KESSLER (Associate Director of Georgetown University’s Berkley Center for Religion, Peace and World Affairs): Well the first thing to keep in mind is that these policy debates are really moral debates. It’s about how to secure the well being of the body, freedom of thought, freedom of conscience. The religious traditions have an immense amount of resources to help us think about where to draw this line. First and foremost in the just war tradition is the idea of proportionality. When you perceive a threat against you, your response has to be measured and tempered appropriate to stop that illegitimate threat but go no further.

ABERNETHY: But let me ask you this, we’re talking about some things that are secret or supposed to be secret, now how do we how do we rate how big a threat there is when we can’t really know because of the secrecy?

KESSLER: Sure, some of that in our political structure is built into the DNA of the political order created by the Constitution. We have checks and balances between the different branches, we have a federalist state local structure that maintains that. We also have the press importantly who helps expose both the threats abroad so that we understand the gravity of what the national government is facing in keeping us secure. But we also have the concerns about, what are these programs? And some information about that I think is a good thing for people to understand where that, how much information is being exposed to the government so that we can have the national debate that President Obama called for.

ABERNETHY: There was a poll out earlier this week, something like fifty-six percent of the people said that security in essence, security is more important than privacy and when they collide, they’d rather go with security.

KESSLER: Sure, first thing as a moral theorist, the fact that something works and the fact that lots of people think that it’s ok doesn’t necessarily make it so. But the second thing is that when you’re trying to balance privacy and security or security against any other value, the gravity of an immediate threat can often recalibrate how you think about the value of these other sorts of things. Twelve years out from 9/11 it may be that some people don’t think of this threat of foreign terrorism in quite the same way, that overrides their concerns about the privacy of their text messages and internet communications. Other people I think do and trying to figure out where the right line is and having a national debate about that I think is the right move right now.

ABERNETHY: Quickly, have you yourself, for yourself come out about where you think, how much, how much the emphasis should be on security and how much on privacy?

KESSLER: I think security is deeply important, I think that the collection and minimization procedures that are in place where they collect the data but can only access it and analyze it if there’s specific threats that they have reasonable suspicion about, that’s the way to go.

ABERNETHY: Professor Michael Kessler of Georgetown University, many thanks.

Watch our conversation with Michael Kessler of Georgetown University’s Berkley Center for Religion, Peace, and World Affairs about perspectives of religious and ethical traditions on the government’s massive collection of electronic data and its vast surveillance effort.