RUSSELL MOORE (Southern Baptist Convention Ethics and Religious Liberty Commission): (in radio show) We will talk about marriage on the line.

KIM LAWTON, correspondent: As the Southern Baptists’ new national voice on matters of ethics and public policy, Russell Moore says he’s not afraid to take controversial stands. But he doesn’t see himself as a culture warrior.

MOORE: I see myself as someone with very strong convictions about what, what matters, the permanent things, but I also see the approach that we as Christians ought to take as one of kindness, which I don’t equate with weakness.

LAWTON: That’s the tone Moore hopes to set as president of the Southern Baptist Convention’s Ethics and Religious Liberty Commission, where he has two basic areas of responsibility: speaking to Southern Baptist churches about important social issues and advocating for those values in the national media and political arenas. In that role, he says he doesn’t want to further political polarization. 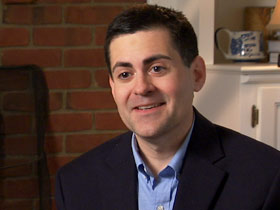 MOORE: I think that anyone who is speaking about an issue that is, that is dearly held, will be seen as polarizing to some degree or other but I think that if you don’t see the other side of an argument as an enemy, if you’re trying to seek to persuade and to be understood, not seeking to vaporize or to demonize opponents, I think that goes a long way.

LAWTON: Moore was previously dean of the School of Theology at Southern Baptist Theological Seminary in Louisville. At 41, he has a different style from many Southern Baptist leaders. He is a prolific Tweeter and blogger, who makes frequent pop culture references.

MOORE: (in speech) Jumping the shark, which comes from the television industry.

MOORE: Having an attentive view of culture I think is a very biblical thing to do, which doesn’t just mean raging against the culture. It means instead seeing where are God’s good gifts showing up in culture? Where are things that we ought to be wary of within the culture? And having a discerning mind and a discerning eye.

LAWTON: Moore hosts a podcast about country music and recently wrote a defense of hip-hop music.

MOORE: Hip hop and country both deal with the full scope of reality, which means not only love but also as Johnny Cash used to put it, I sing about love, God and murder. I think that shows up in country music at least in its old classical form and in contemporary hip hop music and I think it’s important for us to listen to that. 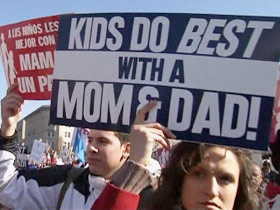 LAWTON: His style may be different, but Moore does hold conservative Southern Baptist positions on traditional social issues, such as his staunch opposition to abortion and same-sex marriage.

LAWTON: Is there a loss of momentum right now for conservative Christians?

MOORE: I think there is, but I’ve never held to a view about marriage for majoritarian reasons. Even if we’re in the minority, we need to be speaking to the common good to say this is, this is why marriage defined naturally and biblically is significant and important for all people. That doesn’t mean that anyone else’s relationships are degraded or somehow people are being legally persecuted for that.

LAWTON: Moore has taken on a broader slate of issues as well. He is considered one of the founders of what has become known as the evangelical “orphan care” movement, which advocates adoption and other ways to help vulnerable children around the world. It’s a deeply personal crusade for Moore and his wife Maria. Two of their five sons were adopted from Russia. 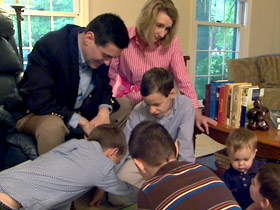 MOORE: Seeing an orphanage filled with children needing families with nowhere to turn and knowing that there are orphanages and group homes and foster care systems all over the world, children, like my own children now, made in the image of God, is a heartbreaking reality.

LAWTON: Moore believes there is a biblical mandate for the movement.

LAWTON: He rejects recent criticism that the orphan care movement has helped bolster human trafficking of children and corruption in some countries.

MOORE: The very people who are calling the church to care for orphans are also those who are the most insistent about fighting human trafficking and corrupt practices and so I think that’s an unfair charge. It’s a movement to not only provide families for those children who are in need of families--and only those children who are legitimately in need of families--but also to attack the root causes of the global orphan crisis, to deal with poverty, to deal with war, to deal with genocide.

LAWTON: Moore is also a vocal advocate for the Southern Baptist Convention’s support for immigration reform.

MOORE: Finding a just way to move immigrant families and communities into the mainstream of American society is a Christian--is a deeply held Christian--notion. We’re not going to agree on everything about how to get there, but I think the basic value structures are there, which is one of the reasons why evangelical Christians are among those calling most loudly for immigration reform. 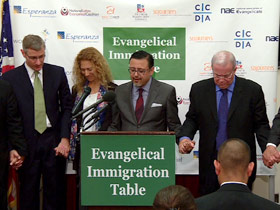 LAWTON: Before becoming a theologian, Moore worked for conservative Mississippi Democratic Congressman Gene Taylor, and in Kentucky, he was a registered independent. He says evangelicals should be careful about being identified with partisan politics.

LAWTON: He’s convinced that Christians have a religious obligation to speak up on moral issues.

LAWTON: New Southern Baptist numbers document a decline in denominational membership, church attendance and baptisms. Moore concedes that in many cases, the traditional values they hold are increasingly not reflected in mainstream society.

MOORE: I think one of the biggest challenges for conservative Christians is moving beyond a Bible Belt mentality, or a moral majority mentality, and seeing ourselves instead as in many cases a prophetic minority speaking to a larger culture about things that matter.

LAWTON: But he says his work with seminary students gives him confidence that those in the next generation will join him.

MOORE: (in speech) We’re disciples. We’ve been called forward with somebody else’s authority.

MOORE: You have deep, deep conviction among millennial Christians, not only in the United States but around the world, and, and God is doing some, some remarkable things, so I have nothing but optimism and hope there.