DAVID TERESHCHUK, correspondent: The small Northern Irish country town of Enniskillen seems like the perfect picture of rural calm. But its history seethes with violence. Most infamously in modern times on the Sunday observed as “Remembrance Day” in November 1987, the morning’s peace was shattered by a devastating bomb. Eleven people died that day, and sixty more were seriously wounded. The bomb had been planted near a memorial honoring the dead of World Wars I and II. It was the work of the Irish Republican Army, the predominantly Roman Catholic organization that used force for advancing Irish aspirations to get Britain out of Northern Ireland. Those killed were all civilians, largely elderly couples gathering to watch the day’s memorial parade, plus a 20-year old student nurse, Marie Wilson. The dead were also all Protestants, members of the community generally labeled “Loyalist” because they remain loyal to Britain’s rule over Northern Ireland. With the carnage, emotions inevitably ran high among political leaders and right across the sectarian divide.

Prime Minister Margaret Thatcher: It was so appalling. I could scarcely believe it, because anyone who would do such a terrible thing would be condemned the world over by every nation. And I hope that will happen. 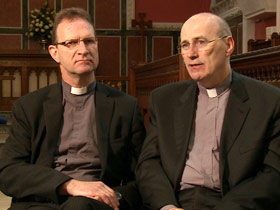 REV. KENNETH HALL (Dean, Protestant Cathedral): Both communities would have been much shocked at the bombing.

FATHER PETER O’REILLY (Roman Catholic Parish Priest): For me, a feeling of shame that something like this might even have been done in my name. It was almost something sacrilegious to do, you know, to take a moment of remembrance and to violate us in that way.

REV. SAM McGUFFIN (Methodist Minister): The explosion terrorized the community. Some folk would tell you that they do feel bitter and always will feel bitter.

TERESHCHUK: But then the day after the bomb, something remarkable happened. Gordon Wilson, a prominent Protestant businessman who was father of the youngest victim, Marie Wilson, went on local television. He described holding his daughter’s hand as she lay dying. And he astonished the audience by saying it was essential that the bombers be forgiven.

Gordon Wilson: (recording) “I bear no ill-will to anybody; nor does my wife. I prayed for them last night, sincerely. And I hope I get the grace to continue to do so.” 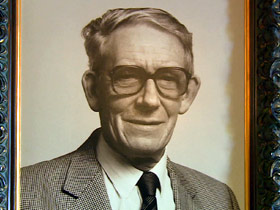 FATHER PETER O’REILLY: Here was somebody who had lost so much, both in terms of his own physical health, but in terms of family. It was electric. Forgiveness is—like all grace, it’s a gift. I mean, he was extraordinarily graced, you might say.

TERESHCHUK: Gordon Wilson’s example led to a surge of efforts at reconciling the town’s communities. Closely associated with Wilson himself was a new foundation named the “Spirit of Enniskillen” that brought Protestants and Catholics together. There were other efforts too over the years, like this local branch of the Ulster Project, which focuses on young people. They’re rehearsing for a forthcoming fundraiser concert to be held when the world’s eyes have turned toward Enniskillen for the G8 Summit.

It's been an unseasonably wet and cold spring and early summer in Enniskillen as the area has been preparing to greet the world's top eight leaders. But the warmth of cooperation and reconciliation shows no sign of cooling between the area's two main faith and cultural traditions, exemplified by the Protestant cathedral right here and its uncommonly close neighbor, the Catholic church just across the street. 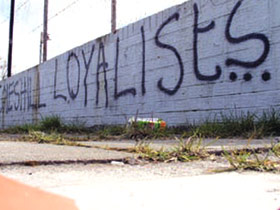 Bridge-building has not been easy. Northern Ireland’s divisions have run very deep, with the onset of violence in the late 1960s onward, and even through the peace-making negotiations of recent years, notably the multiparty Good Friday Agreement, signed in 1998. Tony Blair led that effort as British prime minister, and United States envoy George Mitchell chaired the talks. But even since that breakthrough for peace, there have been and still are sectarian confrontations.

In Enniskillen, the two population groups still largely live separately, often with signs of their differences—flags, emblems, and graffiti—defiantly marking out their territories.

Cross-community activists, like James McLoughlin of the Ulster Project, know they are taking small steps, but valuable ones. And their work is most effective with the much younger set.

JAMES McLOUGHLIN (The Ulster Project): They’re not as blinkered as maybe older teenagers or people of my age group would be.

TERESHCHUK: It’s the school uniforms that mark out the faith of these young people. Predominantly green for Catholics, predominantly blue for Protestants. The project demands cooperation regardless of background—and can even mean the beginnings of friendship. 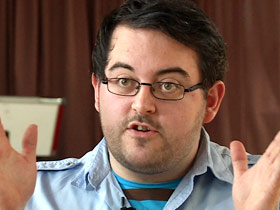 McLOUGHLIN: After the first three or four weeks you’ll see two or three of them hanging around town together. That traditionally wouldn’t have happened because one goes to one school and one goes to another.

TERESHCHUK: One big incentive getting youngsters involved is an annual trip to the United States, where for a month they will get to experience a society where sectarian divisions are rarely so dominant as at home.

McLOUGHLIN: The activities that we do we hope will snowball, and then as we travel to the airport to fly to America, they’re one group.

TERESHCHUK: McLoughlin himself was in the group that traveled over for their US visit twelve years ago.

McLOUGHLIN: It was truly a life-changing experience for me. The Ulster Project allowed me to take those blinkers off, those blinkers of society, and see that the other side were no different.

TERESHCHUK: A boost for Enniskillen’s bridge-building came from Britain’s Queen Elizabeth. While celebrating her 50 years on the throne last year, she visited the town for a religious service. Now, a work of art commemorating that event is arriving. It was created by Hector McDonnell, one of Ireland’s leading painters, and it’s on its way to be displayed at the international summit. 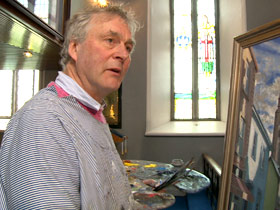 HECTOR MCDONNELL (Artist): You have the community of Enniskillen coming together in this scene.

TERESHCHUK: The service began in the Protestant cathedral, but the Queen then led the congregation across the street to continue in the Catholic parish church, and she was welcomed by Father O’Reilly.

McDONNELL: He is there representing this community which has been at loggerheads with all that’s gone on in Northern Ireland.

FATHER O’REILLY: She represents monarchy from the point of view of history. It’s a way that people do still feel here, in the same way as the flag can be for some an abrasive kind of symbol.

TERESHCHUK: But Enniskillen’s bridge-builders, including many Roman Catholics, chose to see things differently. In this case the Queen came to represent if not political unity then at least some essential affinity.

FATHER O’REILLY: She very powerfully brought to visibility the fact that we are one community. We are neighbors to one another.

TERESHCHUK: So as the world’s most powerful leaders descend upon this quiet but once troubled spot, local people, including the minister at Gordon Wilson’s own place of worship, feel they may even have some lessons to offer.

REV. SAM McGUFFIN: If G8 folk could catch something of what has happened in Enniskillen and go out into the world with a message of grace and the potential through their decisions to bring a better life to everyone, that’s something to be applauded and encouraged, and we’d love to see that happen.

TERESHCHUK: At the very least, Enniskillen’s people can feel, probably with some cause, that their hometown’s story has made it an appropriate place now in which solutions to severe disagreements might be found.

After an IRA explosion in 1987 terrorized the community of Enniskillen, killed 11 Protestants, and injured scores of others, Gordon Wilson, father of one victim, said he forgave the bombers and prayed for the grace to continue to do so. Will the members of the G8 summit meeting in Northern Ireland be able to draw on a similar spirit of peace and reconciliation?