JUDY VALENTE, correspondent: Father Charles Dahm has come to a parish on Chicago’s north side to deliver the kind of homily the parishioners have probably never heard before—one which will make some of them uncomfortable.

FATHER CHARLES DAHM: (preaching) How many of you have ever heard a sermon about domestic violence? Raise your hand. See, no one.

Domestic violence is often unnoticed, hidden from our eyes, but actually it is rampant in our society and in our communities. We know, of course, that there are probably women here this morning who have experienced violence in their own homes, and our heart goes out to you.

RITA SMITH (Executive Director, National Coalition against Domestic Violence): One in four women will be abused sometime in her lifetime. 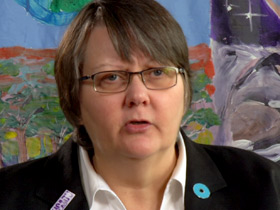 SMITH: Lost time at work, decreased productivity at work, health care costs related to injuries as a result of abuse, response time and cost for law enforcement to go to calls when someone is being battered.

VALENTE: But so often the problem lies hidden.

FATHER DAHM: I’ve been a priest for 48 years. I didn’t see it until I hired a pastoral counselor and one day she said, “Father, you know, almost all my clients from the parish are women who are victims of domestic violence.” And I didn’t know it. And I knew many of those women.

VALENTE: Father Dahm was surprised by the extent of domestic violence within the families he served. When he realized there was no official church outreach to abuse victims, he decided to start his own ministry.

FATHER DAHM: Priests generally do not talk about it. And most dioceses in the United States have no services, or very limited services, for victims of domestic violence. 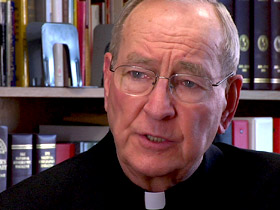 VALENTE: He goes to parishes where he is invited. So far he has traveled to some thirty parishes in the Chicago area. He has no budget and a limited staff of volunteers to focus attention on the problem. And pastors have not always been enthusiastic about his message.

FATHER DAHM: One priest didn’t want to do it because he thought it would be offensive to the children who might be in the congregation listening to the homily. Others think we don’t have that problem here. It’s someplace else. We don’t have it. Or that it’s too difficult a topic to talk about and they don’t know how to do it.

SMITH: I would say at this point most churches are not doing a particularly good job with this. It's not that they don't want to. I think that this is just a very, very complex issue.

FATHER DAHM: (praying) We’re here tonight because we want to serve especially those people who suffer violence in their own homes.

VALENTE: After talking about domestic violence at Mass, Father Dahm invites parishioners to meet with him to discuss how their church might help those who are suffering abuse. On this night, six people came. Some had been victims, others simply wanted to help.

MARIA: I come from an abusive home, and it's led me to get into abusive relationships. I'm divorced also because I divorced my abuser, but I was about to marry another abuser. So this is the cycle that continues unless you get help. 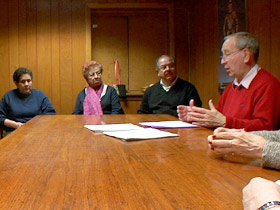 JEAN MIRABELLA (Clinical Social Worker): I left a domestic violence relationship almost 35 years ago, myself and my four kids. The sad news is not very much has changed as far as men who batter and women who struggle to get out of the relationship.

JAN BERDULIS (St. Pascal Parish): When he preached at our parish about a year ago, I was sort of surprised because I was unaware at that time of domestic violence and how prevalent it is within all communities, all neighborhoods, all levels, all ethnicities.

VALENTE: Father Dahm tells them a first step is to establish a support group, so that women who are battered know they have a safe place to tell their stories. The parish can then work to connect them with agencies that can help. Parish volunteers also need to be trained so they know how to respond to pleas for help.

FATHER DAHM: Many times victims call and they don’t say “I'm a victim of domestic violence.” They just might say, “I need to talk.” Or “I’m having problems in my home” or “My husband and I are having problems.” So that’s all. So that’s actually a code almost for “I need help.”

LAURA REYES: One day I ended up in the hospital because I had bruises on my face. He kicked me and hit me in my face many times.

VALENTE: Women often stay for years in abusive relationships, for a variety of reasons. 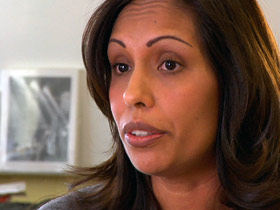 REYES: You think you love the person, that God wants you to be in the relationship because it was the man of your life, because he's the father of your daughter. So you belong there.

MIRABELLA: So many of the women I've worked with over all these years are practicing Catholics and they cannot comprehend the idea that it would be acceptable if they were to leave and get divorced, so your message is like something I didn't think I'd be hearing in my lifetime.

VALENTE: The US Conference of Catholic Bishops has said “no person is expected to stay in an abusive marriage,” adding, “We encourage abused persons who have divorced to investigate the possibility of seeking an annulment.”

Valerie Yokie is a director with Mary Kay cosmetics. She says she first became aware of the extent of domestic abuse by talking to her customers. At one point, she served on an advisory board to Chicago’s Cardinal Francis George. She brought the issue of domestic violence to his attention—forcefully, she recalls. 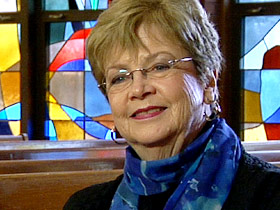 VALERIE YOKIE: Your Eminence, we don’t talk about it in our churches, we are not supporting women, and our church would be nowhere if it weren’t for women.

VALENTE: About 25 people showed up for a meeting on domestic violence at Yokie’s church after Father Dahm spoke at the Masses. Yokie believes churches are one of the best settings in which to address the problem.

YOKIE: It’s the one place where you have the perpetrator, the victim and the witnesses, the kids, hearing the message that it’s wrong, that God loves you, we’re here to support you, you don’t have to put up with it.

VALENTE: Men can also be victims of domestic abuse, often in same-sex relationships, but that number is small compared to women. And domestic violence can be other than physical.

FATHER DAHM: Emotional or psychological violence is much more difficult to detect, but it’s also more frequent, the belittling, demeaning, the insults, all the ways in which the woman is isolated from her family and friends.

VALENTE: That was the case with Elia and Roman Carreon. The first twenty years of their marriage were marked by frequent periods of emotional trauma. 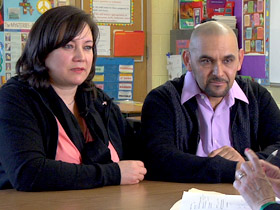 ELIA CARREON: The verbal abuse, the silent treatment, the humiliation of the words. He would call me names, he would call me crazy. Every time I would bring up counseling he would say, you go to counseling, you’re the one that’s crazy.

ROMAN CARREON: To me I was a nice man. That’s what I saw about me. I never hit anybody. I wasn’t doing anything wrong. I was just...Actually I thought of myself as actually doing something better than most of my family.

ROMAN CARREON: I would hear other men telling their story. And I would say, you know, as they were saying their story, how come you're not expecting to get in trouble with the things you're doing? That's wrong. But then after a little while I realized, jeez, that’s what I do.

VALENTE: (to Elia) How would you describe your marriage now?

ELIA CARREON: Healthy. If I had to choose one word, it’s healthy. Not only are we healthier, are we more in love. 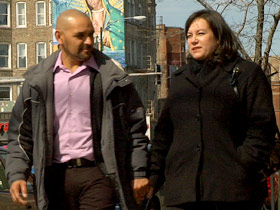 ROMAN CARREON: Now I know that she’s my partner. We’re aiming to grow old together. It’s not about me anymore. Now, if something happens to you, it happens to me too.

VALENTE: Reported incidents of domestic abuse nationwide are down. But Father Dahm says it’s difficult to measure success, because no one knows how many women who need help aren’t coming forward. A woman might leave an abusive partner as many as seven times before she finally makes the break. And the abusers don’t change easily. Father Dahm says they have to be confronted and held accountable.

FATHER DAHM: The good news about domestic violence is that it is learned behavior. It’s not something we inherit in our genes; we learn it from somebody, someplace. That means it can be unlearned.

(speaking to group) I’ve seen it with abusers who’ve converted and now have turned their lives around. They’re super active in our parish. So we have a very strong men's group in our parish that is made up primarily of people who were perpetrators.

ROMAN CARREON: I went twenty years of my marriage without knowing all this. So I did a lot of things that now I regret. But thank God, you know, I can live the rest of my life with my wife without violence.

VALENTE: Which is why Father Dahm will continue visiting parishes, delivering a homily that will be news to some. For others, it’s a message that may change their lives.

“Priests generally do not talk about it. And most dioceses in the United States have no services, or very limited services, for victims of domestic violence,” says Father Charles Dahm, who is leading a campaign in Chicago to change that.