JUDY VALENTE, correspondent: This is a key part of Sister Joan Chittister’s life: praying the Psalms daily with others in her Benedictine monastic community. And this too is her life: writing. She has written more than 40 books on the spiritual life that together have sold over a million copies. Her often provocative statements – she has called the Catholic Church “one of the last bastions of sexism” and characterized its position on abortion as “more pro-birth than pro-life” – have made her a heroine to some, a rebel to others. She is also a familiar face at public protests, speaking out against nuclear arms, war and poverty.

SISTER JOAN CHITTISTER: I have a disease called justice. I can spot injustice at a great distance and feel compelled to confront it.

VALENTE: She has long advocated for Catholic women’s ordination and a greater voice for lay people. And she has rankled her Church’s hierarchy on a host of other issues. Scrutiny of Women Relgious?

VALENTE: Ongoing revelations of sexual abuse and the coverup by hierarchy? 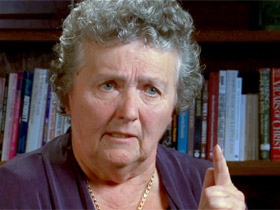 CHITTISTER: An infection in the body of the church.

VALENTE: The shortage of priests?

CHITTISTER: Obviously a social issue that needs, needed to be addressed.

VALENTE: She says that society is rapidly changing, and that all churches need to address those changes.

CHITTISTER: To be reactionary at a time like this is to stand in front of a tsunami and say you can swim. We’re changing. Our goal is to change for the better. The church has to model that changing for the better, not clinging to the past, but reforming the future. It is possible. It’s been done multiple times in human history and we have to stop resisting it now.

VALENTE: For the past sixty-one years, Sister Joan has been a member of Mount St. Benedict Monastery in Erie, Pennsylvania. She was educated by the Erie Benedictines and entered the monastery here at age sixteen. 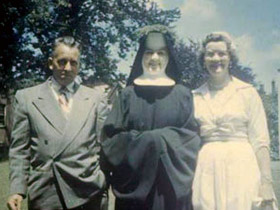 CHITTISTER: On my tenth day of high school, I said, "Mom, there's something I want to tell you." And she said, "What’s that, honey?" And I said, "I've decided I’m going to be a Benedictine." She said, "You’re gonna do what?!"

VALENTE: A teenage battle with polio nearly derailed her dream of becoming a nun.

CHITTISTER: Those were the days when, if you were ill, they didn’t take you. So it took probably more nerve on their part than mine, but it seems to me, what has come down to me over the years is, they were simply struck by the degree of commitment, and they couldn’t bring themselves to send me home.

VALENTE: Over the years, she has become a spokeswoman for interfaith relations and has traveled the world on peace-making missions.

Sister Joan is perhaps best known for introducing 21st century readers to the 6th century “Rule of St. Benedict,” a spiritual guide she says is as relevant today as when it was written. 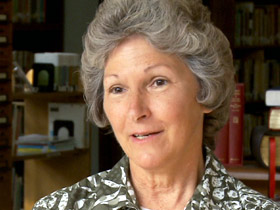 St. Benedict advocated a life of prayer and work, and stressed the importance of hospitality, humility and community. He wrote when the Roman Empire was in economic decline and under threat from outside forces – a time, the Benedictine Sisters say, not unlike our own.

SISTER ANNE WAMBACH (Prioress of Mount St. Benedictine Monastery): Benedict was trying to in his day show people that there was another way to go about life. Moderation in all things, balance in all things, certainly God at the center of all. We have been trying to make people aware that Benedictine spirituality is for all people, not just for religious women and men, and has been from the beginning. I think Joan does that very well.

VALENTE: Sister Joan doesn’t live in the monastery itself, which is seven miles from Erie’s downtown, but in the inner city amid drug houses and abandoned buildings. Her roommates are other Benedictine sisters and her beloved parakeet, Lady Hildegard, named for a reform-minded Benedictine abbess denounced in her own time, but later named a saint.

CHITTISTER: Benedictines take to this day a vow of stability. What does that mean? It means we’re in Erie for life. We go down with this city, or we build it up. 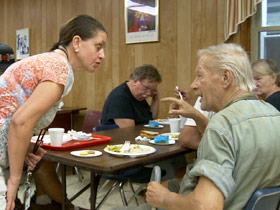 VALENTE: Once a thriving manufacturing city, Erie has for decades been battling an economic decline and is today one of the poorest cities in Pennsylvania. The Benedictines sponsor a variety of inner-city ministries. This is an old tire factory the sisters transformed into The Art House, a place where children learn to play instruments, dance, write poetry and paint. There is also the Emmaus Soup Kitchen that feeds more than 200 people a day and a refugee center, housed in what was once a Benedictine Academy for Girls.

WOMAN: (praying) Gracious God of the Cosmos we ask your blessing on all who work here.

VALENTE: On this day, the sisters gather to bless their most recent effort: The Grove, an urban farm with 65 raised beds that will provide fresh produce for the poor, and serve as an outdoor classroom for teaching gardening techniques.

BARRY GROSSMAN (Erie County Executive): You cannot walk anywhere in our community and not see the footprint of the Benedictine Sisters, everywhere you go. 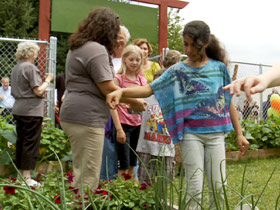 VALENTE: One of Sister Joan’s newest and most cherished projects is the virtual monastery she and the other sisters have created for the Internet. She calls the website “The Monastery of the Heart.”

CHITTISTER: We now have over 7,400 members from all around the globe. People who come into the site to pray in the morning—we have a prayer site—to pray in the evening, to join discussions, to read the basic books and talk about them. They’re forming their own small communities, many of them. We have I think about 40 small communities now.

VALENTE: Noting how Benedictines have often adapted to changing times in their 1,500-year history, Sister Joan says of her “Monastery of the Heart” website:

CHITTISTER: If Benedict of Nursia had been here, not only do I think he’d be a member, I think he would have started it.

VALENTE: It is that kind of visionary leadership, she says, that the church itself needs to survive in the 21st century.

(to Chittister) Why do you stay in the Catholic Church?

CHITTISTER: Roman Catholicism is the storehouse, the treasure house of the Christian tradition. It’s this whole notion of the blend of wisdom, of commitment, of knowledge, of holiness. That’s the church for me. That’s the church I’m waiting for.

VALENTE: In the meantime, she vows to continue writing, pressing for change, and speaking out against injustice. For Religion & Ethics NewsWeekly, I’m Judy Valente in Erie, Pennsylvania.

“Roman Catholicism is the storehouse, the treasure house of the Christian tradition. It’s this whole notion of the blend of wisdom, of commitment, of knowledge, of holiness. That’s the church for me. That’s the church I’m waiting for.”