BOB ABERNETHY, host: The international community was deeply divided this week over military strikes against Syria in response to reports last week that the Assad regime had used chemical weapons on the Syrian people. The Obama administration said at least 1,429 people were killed in the chemical attack, among them 426 children. On Friday, Secretary of State John Kerry outlined the administration's case against the Assad regime. Earlier in the week, Kerry said the chemical attack should shock the conscience of the world:

Secretary John Kerry: “Let me be clear: the indiscriminate slaughter of civilians, the killing of women and children and innocent bystanders by chemical weapons is a moral obscenity.”

ABERNETHY: Meanwhile, many religious leaders warned against the use of force by other nations against Syria. From the Vatican, Pope Francis said dialogue is the only option to end the war there.

For more on all this, I'm joined by Kim Lawton, managing editor of this program, and George Lopez, a professor at the Kroc Institute for International Peace Studies at the University of Notre Dame. He joins us from South Bend, Indiana.

George, welcome. Would you just sum up for us very briefly the major moral issues involved here? 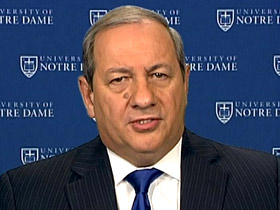 GEORGE LOPEZ (Professor of Peace Studies, University of Notre Dame): Well, I think the major moral issues, Bob, flow from just war principles. Is there just cause and right intention? Yes, there’s a grave public evil with a chemical weapons attack. But on criteria of last resort, proportional response, probability of success, this strike idea really falls short of the mark.

KIM LAWTON (Managing Editor, Religion & Ethics NewsWeekly): There’s a lot of talk of we have a responsibility to protect in the international community when civilians are facing grave crimes. Where does that play into all of this?

LOPEZ: Well, it gets very close, Kim, to the last resort criteria in just war theory, and that is are there a number of other economic, diplomatic steps that be taken short of the use of military force, and there certainly are, particularly with putting more inspectors on the ground and more demands to the Assad regime to turn over those responsible for these attacks. They haven’t been resorted to.

ABERNETHY: If we had not attacked, if we did not attack, George, would that be a grave problem for our credibility in any future situation like this?

LOPEZ: Only for those who believe that the only way you establish credibility is through the use of military force. Where we’d lack credibility is if we didn’t engage in leading the moral charge, critique, and diplomatic protest, if we didn’t make new and clear demands of Assad, and if we weren’t keeping focus the international community’s effort to actually respond to the humanitarian crisis on the ground. We ourselves can and should do a better job if we’re interested in protecting civilians on the humanitarian side. 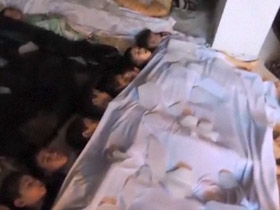 LAWTON: What is the moral difference between this particular attack and, you know, the hundred thousand people who have been killed in Syria, many of them civilians, leading up to this? You know, why is there a difference, a moral difference, after this attack?

LOPEZ: Well, I’m sympathetic with the argument that there, it’s very cynical to think that there’s a difference between the two. Both are horrendous atrocities. The difference here is that we’re talking about a prohibition of over a century, and every time that chemical weapons have been used these are very serious, grave public evils.

LAWTON: And why should the U.S. do something by itself? Is that something morally that should be considered? Is there authority to do that?

LOPEZ: No, I think in fact if you can’t build a coalition either at the Security Council or among a broad base of nations, including support in the region from the Arab League, than in fact you lack the competent or legitimate authority to take action. This was not a strike against the United States, remember. However grave its consequences for the Syrian people, we are not the single enforcer of law here.

ABERNETHY:So very quickly, George, to sum up, where do you come down? Is an attack right or wrong?

LOPEZ: An attack can be more correct if it’s surgical, if it’s backed by the UN Security Council, if it’s combined with a set of other measures that have preceded it to try get to Assad to understand the principles of international law and morality he must live according to.

ABERNETHY: George Lopez of the Kroc Institute for International Peace Studies at the University of Notre Dame. Many thanks.

Does the US have a “responsibility to protect” now that the use of chemical weapons by Syria has been confirmed? Watch our discussion with University of Notre Dame peace studies professor George Lopez, who says, “Is there just cause and right intention? Yes, there’s a grave public evil with a chemical weapons attack. But on criteria of last resort, proportional response, probability of success, this strike idea really falls short of the mark.”