BOB ABERNETHY, host: There was strong and widespread religious opposition this week to the Obama administration’s proposed military strike against the Assad regime in Syria. From the Vatican, Pope Francis called military action futile. He designated Saturday as a day of prayer and fasting for peace in Syria. Several US Christian groups also denounced the use of force, saying it could lead to more violence. The military strike did get support from some Jewish leaders. A group of prominent rabbis wrote to Congress that US action could save thousands of lives.

Meanwhile, the refugee crisis has escalated dramatically. About one-third of Syria’s population has been displaced. More than 2 million people have fled the country and another 4.5 million have left their homes but remain in Syria. The UN described the situation as "the great tragedy of this century."

We get a religious view now on the possibility of a missile strike on Syria and alternatives to it. Kim Lawton, our managing editor, joins me for a conversation with Father Drew Christiansen. Currently at Boston College, he is the former editor of the Jesuit magazine America, newly appointed to the faculty at Georgetown University. Father, welcome, congratulations on your new appointment. What’s the most important reason that you oppose a missile strike against Syria? 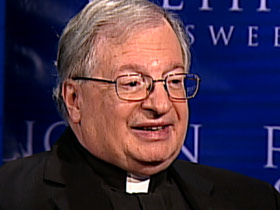 REV. DREW CHRISTIANSEN, S.J. (Visiting Scholar, Boston College): Well, I think the missile strike doesn’t do the most essential thing, which is saving the people of Syria. And we could do more if we spent the money we’re spending on bombs on caring for the refugees. We’re the leading donor still, but still, so much...only a third of the money needed for refugees has been given.

ABERNETHY: But Assad used chemical weapons, apparently, on his own people. Isn’t that reason enough for a military strike?

CHRISTIANSEN: It’s no more reason than the 120,000 people he’s killed by other means. It’s a crime of war to kill innocent civilians under any conditions.

KIM LAWTON (Managing Editor, Religion & Ethics NewsWeekly): Some people say, though, that this does—the chemical attack—did make a moral difference because it was something the international community has said we will not tolerate, and we need to send a message to other dictators that we will not tolerate that kind of activity.

CHRISTIANSEN: I don’t think that outweighs the need to do something to protect people, generally in Syria, from the kind of destruction that their government is wreaking upon them.

ABERNETHY: How could we do that? How would you—

CHRISTIANSEN: Well, for one, I would give support, as I suggested, to the refugee programs— 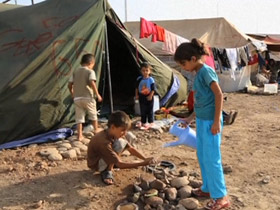 ABERNETHY: I understand. But, within Syria…

CHRISTIANSEN: Well, within Syria, I think work has to be done again to get the access to the people in need through the International Committee of the Red Cross. Beyond that, I think that the diplomatic surge, if you will, is needed to try to bring about negotiations among all the sides.

LAWTON: Some people see this, though, as one of those instances where we need to send a strong message. Would that appear to be, in some way, a cop-out from our stated goal of protecting, you know, the responsibility we have to protect people?

ABERNETHY: And losing a lot of credibility?

CHRISTIANSEN: I think it’s a legal and political nicety. The fundamental issue is saving the people. And credibility doesn’t stand up to the justifications for going to war at all. That’s not a just cause for going to war.

ABERNETHY: And so, what do you propose?

CHRISTIANSEN: Well, in addition to the refugee work, I would propose that there really be a campaign at the General Assembly in September, beginning that time, to get the nations of the world on board the negotiation route. And if they do that consistently, as the German foreign minister suggested yesterday, it seems to me that there’s a chance that these things can be resolved. 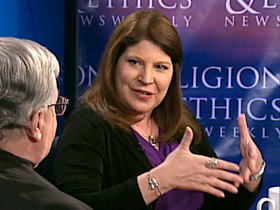 LAWTON: Some people talk about using the international instruments like the criminal court system to try to, again, send a message: “We won’t tolerate this.”

CHRISTIANSEN: There are problems there, particularly because you need the U.N. to do it, you need it to come from the Security Council and the Russians will veto it. An individual nation could bring charges, but that would...it’s hard to say how that would work.

LAWTON: What are you hearing from your fellow Christians in the region, specifically inside Syria, a minority inside a religiously very divided country?

CHRISTIANSEN: Well, we’re hearing from some people who we know are normally vocal. I haven’t heard many new voices. And the community is divided. Some of the leaders on the political side of the resistance are Christians. But the bishops, in particular, have clung to the Assad regime because it’s protected them for so many years.

LAWTON: Is there a concern that acting, if the U.S. did act, could stoke some of those inter-religious tensions?

CHRISTIANSEN: Oh, there’s a deep fear that if the West intervenes, it’ll be seen as a crusade of Christians against Muslims. And so, you would expect that al-Qaeda and others would go after the Christians in the country.

ABERNETHY: But for you, again, the most important reason for your opposition has to do with...?

CHRISTIANSEN: With the need to protect the people in whatever ways we can and that are now practical.

ABERNETHY: And do you think there is—that we can do that?

CHRISTIANSEN: I think that means can be found internally through the committee of the Red Cross, which does that normally.

ABERNETHY: Father Drew Christiansen. Many thanks to you.

There was strong and widespread religious opposition this week to the Obama administration’s proposed military strike against the Assad regime in Syria. We discuss the possibility of a missile strike, and alternatives to it, with Father Drew Christiansen, former editor of the Jesuit magazine America. “I think the missile strike doesn’t do the most essential thing, which is saving the people of Syria. And we could do more if we spent the money we’re spending on bombs on caring for the refugees,” he says.